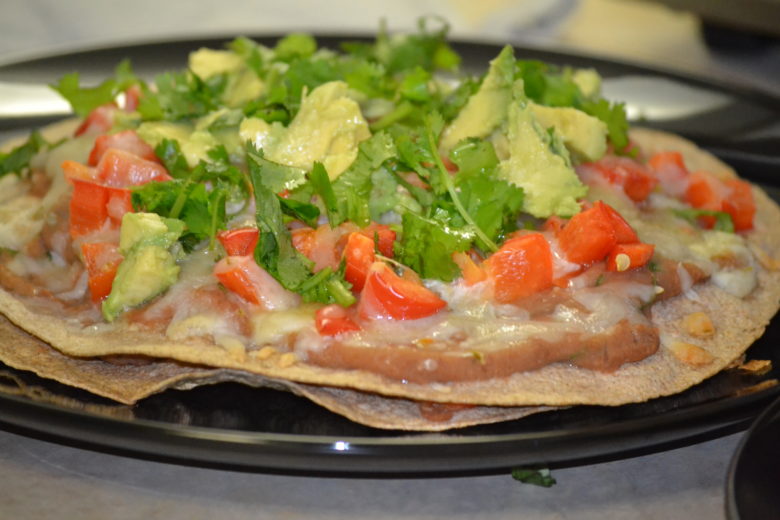 This past weekend, the boyfriend and I decided to make a recipe that I found on Pinterest: chicken taco stacks. We slightly altered this recipe, but since we used whole wheat tortillas and based on the overall ingredients, I am renaming it “chicken tortilla stacks.” This was a wonderful dinner (and made some pretty decent leftovers the next day) that was prepared pretty quickly with two people in the kitchen. We were a little short on thawed chicken breasts and since I’m anti-spicy food, left out the jalapenos. However, the combination of cilantro + lime juice definitely gave it a kick.

Despite being incredibly hungry, neither of us finished our entire meal. It’s deceptively filling and we decided to stay comfortably full and have dessert + wine rather than stuff ourselves uncomfortably. I’m so glad we did that, because throwing a third of this in the microwave for 30 seconds was the easiest lunch on a lazy Sunday! * We were short on thawed chicken, so used two small chicken breasts. I would definitely recommend using 3
**  As people who like cheese a lot, we definitely used more than 1 1/2 cups

Cook the chicken and cut into small pieces. Dice pepper. Mix together beans and most of cilantro (leave some to the side for toppings) and juice of half the lime. In the meantime, spray a non-stick baking pan and cook tortillas for 3 minutes on each side. They’ll come out slightly crispy.

After taking the tortillas out of the oven, set two aside. Spread thin coating of bean mixture on one tortilla. Layer some chicken on top evenly and top with peppers. (Note: Since these are stacks, make sure you don’t use up all the toppings on the first layer!) Top with a second tortilla. Coat with another layer of beans, chicken, peppers, and cheese. Top with sliced avocado and cilantro and finish with lime juice. Repeat with the other two tortillas for the second stack.