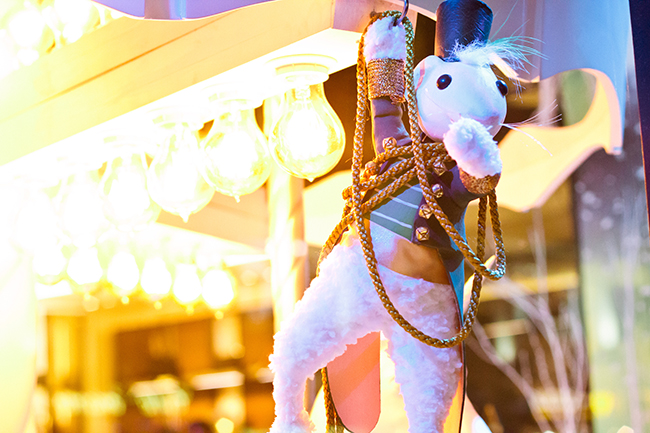 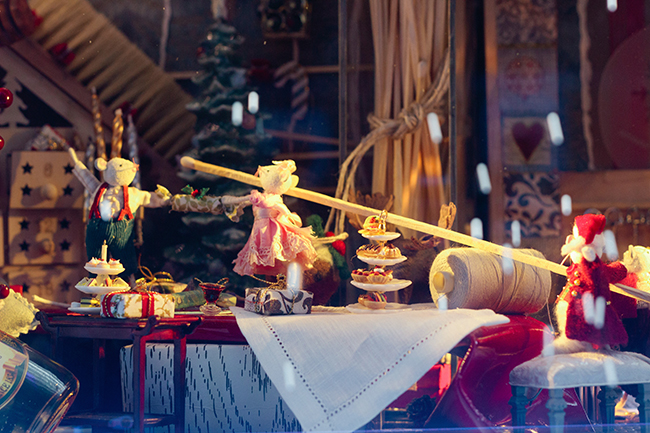 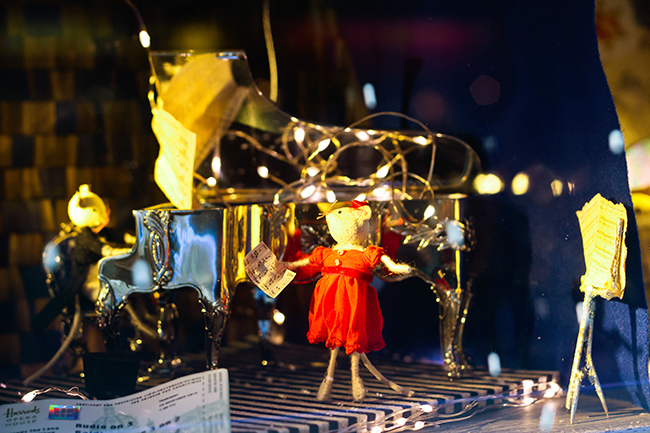 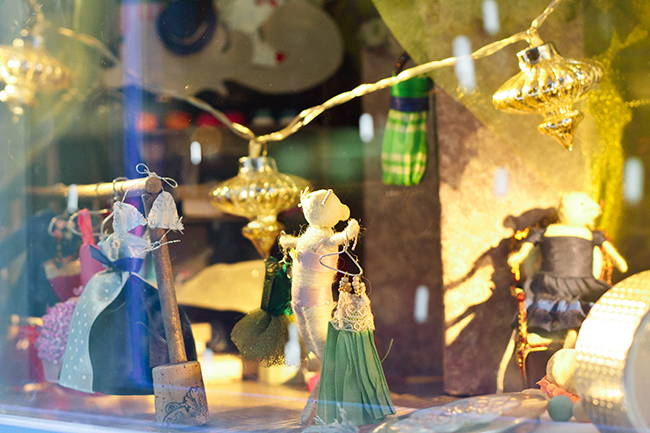 I’ve been excited about this post for a long time… it’s definitely one of the cooler things that’s been on the blog! I’ve mentioned Supal in various capacities (her recipes are worth bookmarking) and am lucky to call her a good friend. She’s had the opportunity to do design consultation for holiday window displays and was able to give a little insight into how the creation process works. So that bring us to the Harrods holiday windows. Yes, that Harrods. How cool is that?! These are some of the most talked about windows each year and it’s obvious that a tremendous amount of work goes in to make sure each year is better than the last.

The theme this year is “The Land of Make Believe,” which is described as a “contemporary take on tradition set against a Scandinavian landscape of silver birch trees, ice-blue skies, and snowdrifts.” A number of products are artfully scattered throughout the display, which is filled with little toy mice figurines. As you can see from the photos (more are below) it’s really quite a sight!

Now, for the behind the scenes with Supal…

M: When and how did you first get involved with the holiday window design process in London?

S: I was approached by a design school here in London in early 2012 to consult on a series of holiday windows for a few department stores in London that would be launched in November 2013. I think I was lucky because I was found on Twitter. Never underestimate the power of social media! After a few design screenings, meaning the design team looked at some of my work and ideas, I was asked to join a board of consultants that assist in the design process on holiday windows in London.

Tell me a little bit about your creative process when it comes to brainstorming for the windows.

We are usually given a theme or a general idea a year in advance. Themes range from being political and fantastical and symbolic. I like to properly immerse myself in the theme by reading up on the topic and delving into primary research. For example, this year’s theme for Harrods was The Land of Make Believe where traditionally met modernity, where Harrods recreated traditional toys and presents with luxury pieces against a quintessential Scandinavian winter backdrop. And so the reading of old Christmas stories commenced whilst applying the literature’s imagery on paper, researching Christmas traditions around the world, lots of discussions among the other designers prosper ideas as well. We bring a theme to life through fashion and design.

People of all types of backgrounds. It’s always headed by designers the specialize in windows and have a background in marketing. Then there are a series of design consultants that work and liaise with the actual fashion designers and companies that are being featured in the windows. I love that in London, such a diverse community in general, the design teams for windows are made up of people from all types of cultural backgrounds. People come from the Middle East, Eastern Europe, Russia, Africa, to the US. It’s a dynamic community and I think that’s why London’s windows are particularly spectacular.

What is it like walking by the windows after they go on display?

I’m assuming it’s like watching your baby take its first steps. A very proud moment. The window displays from Selfridges to Harrods to every window on Regent Street is a spectacle. People from tourists to Londoners are stopping to take in the design and scenery. Each window outdoes the next. People stop to take photos, selfies, even set up sketch boards! And when the window you worked on is getting some love and attention, it’s gratifying.

What is your favorite window or concept from this year’s project?

I don’t think I have a favorite window. They all basically display one large window as they tell a story together. I will admit that the smaller windows at Harrods, between the large ones, are the most creative. They showcase all the Harrods has to offer whilst utilizing the theme and making miniatures of products. They’re like little dollhouses. I think those take a lot more work as you have to be extra creative to fit as much as possible in a little space. In my opinion, they have the most impact. The small snapshot windows is one thing Harrods does that no other department store does. It’s a great way to market what your company can offer whilst entertaining the theme and the idea of the holiday windows.

Doesn’t this sound like an incredible experience? Thank you, Supal, for answering all these questions and for taking the (best) photos (all the time)! I hope you all enjoyed this little look into something that’s such an integral part of the holidays around the world each year! 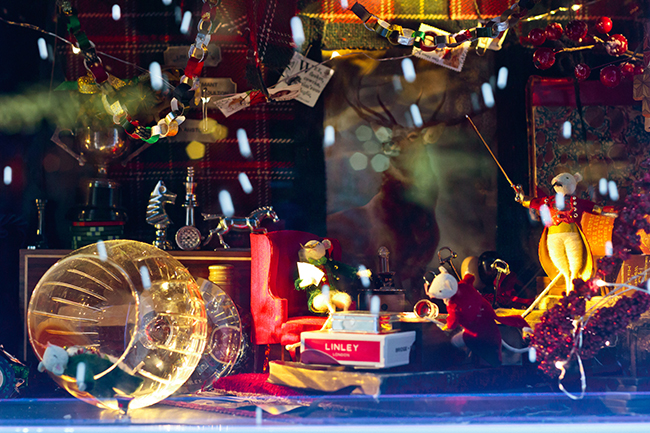 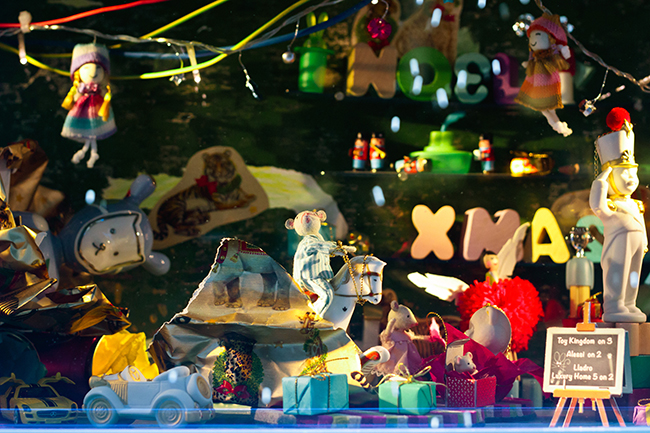 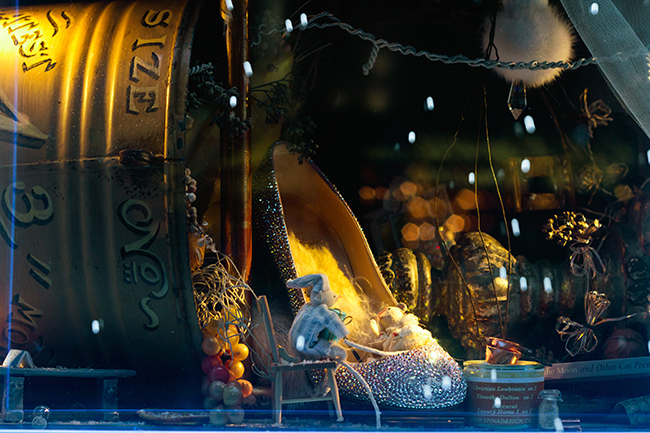 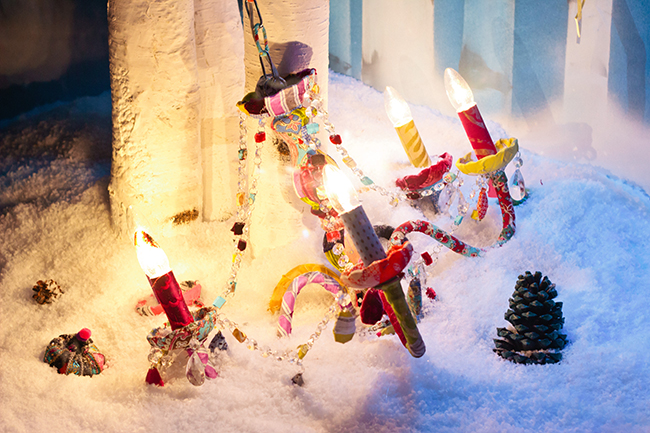 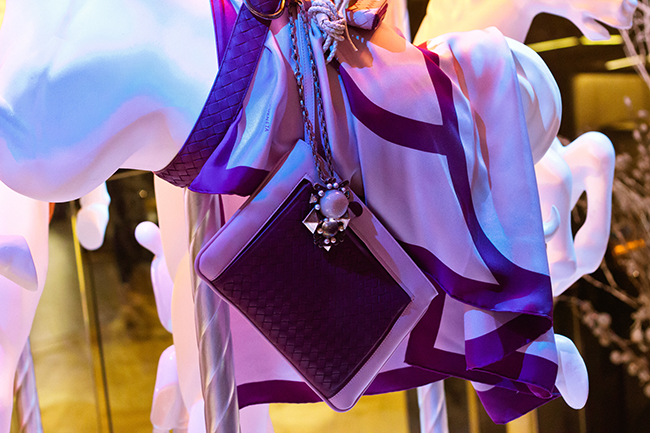 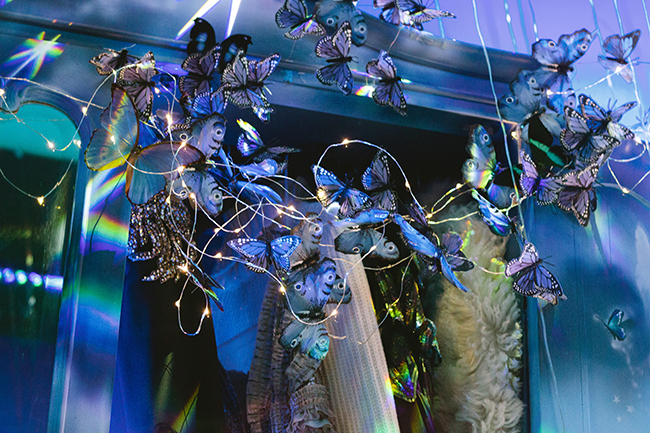 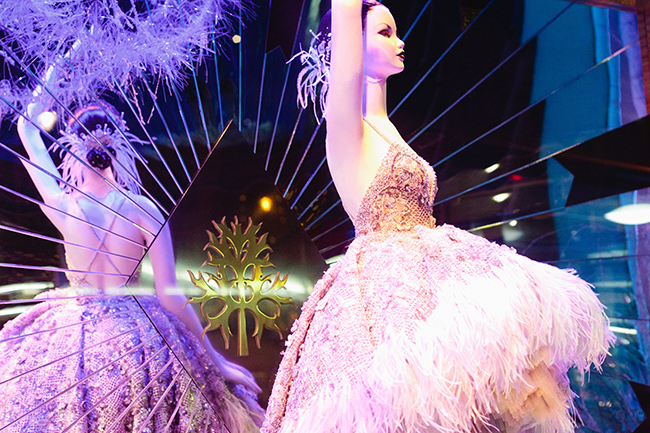 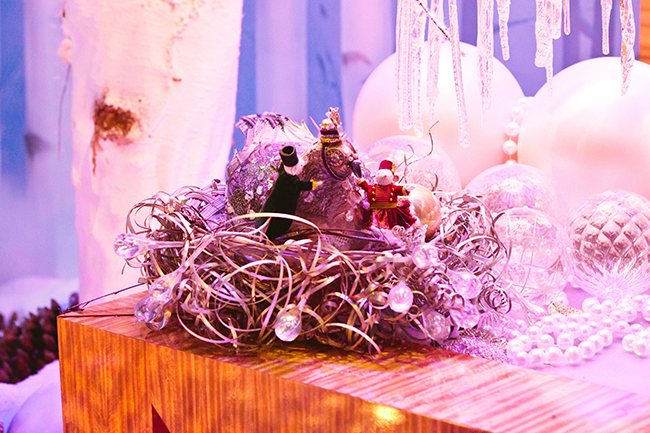 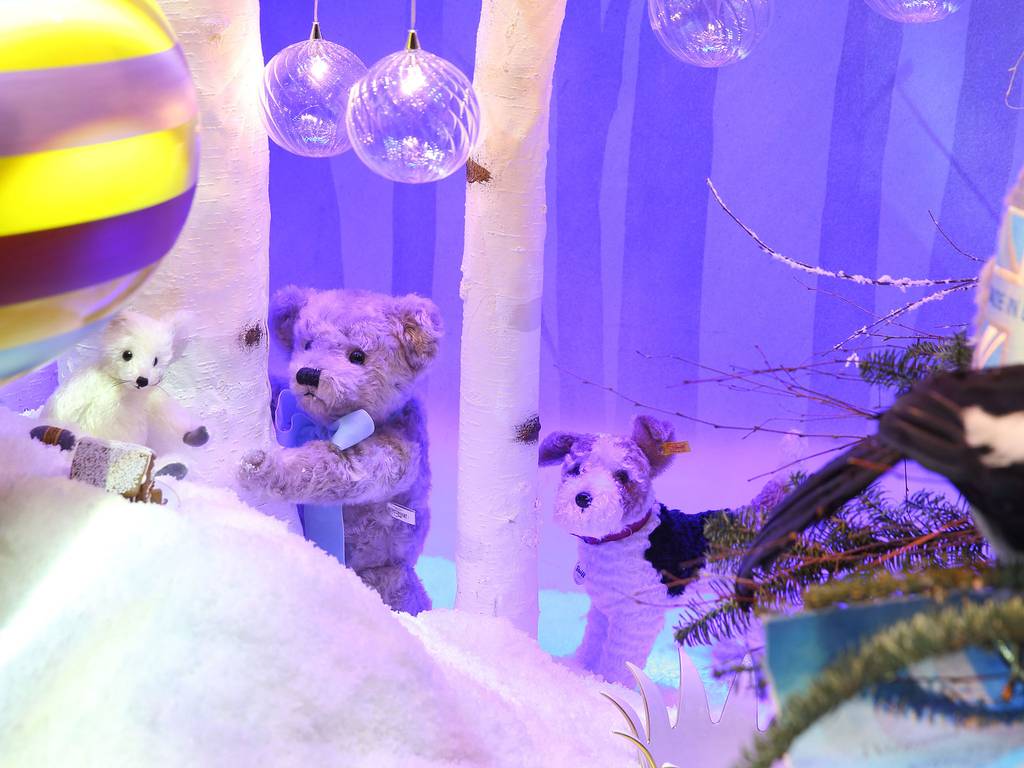 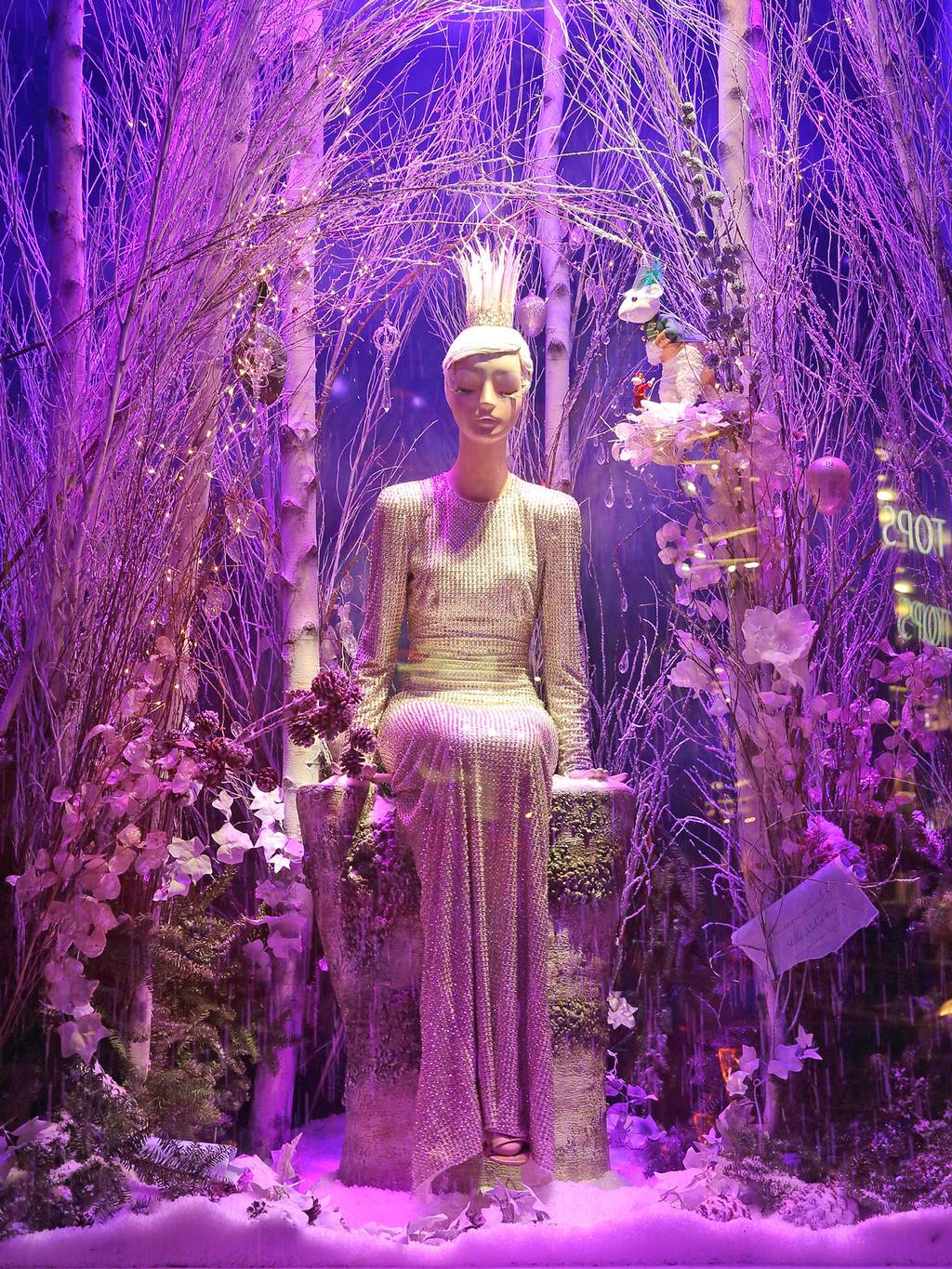 All photos by Supal except the last two, which are via this article