As you may know by now, I was in Europe all last week with one of my besties… we stayed in Freiburg, Germany for six nights and took day trips to Titisee, Basel (Switzerland), and Strasbourg (France). To say it was an amazing, necessary break is an understatement. I realized I hadn’t had an indulgent/relaxing trip (we’re not counting trips to NYC or going home for the holidays) in nearly two years and after spending my days at a desk in an office and behind a computer, getting far out of town was just what the doctor ordered. We spent our days eating, drinking, walking, talking, laughing, and shopping. It was as good as it sounds. I’m going to do a couple more posts about our trip (on the hotel and on the breakfast) but for now, here is an overview of our vaca. Get ready for a serious photo overload….

A note: I used this trip as a way to actually immerse myself in learning to properly operate my DSLR camera. I’ve had it for about a year and a half and have let myself be incredibly intimidated by it, so this week was my way of forcing myself to learn some settings and adjustments that I’d previously avoided. I know I still have a long way to go, but I’m glad I’m finally taking the time to make some progress! A few of these are still iPhone shots, though.. 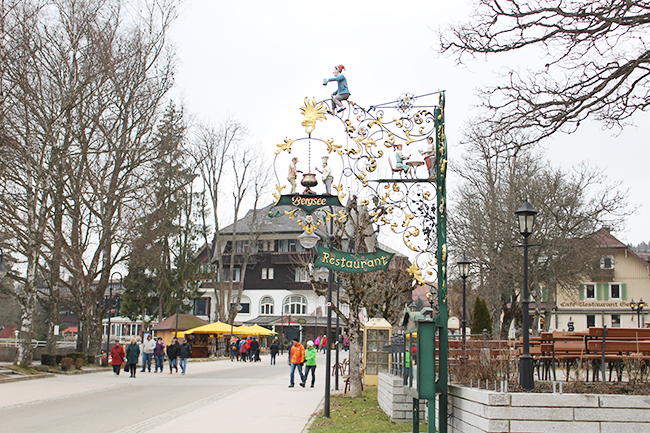 After a canceled flight thanks to an airline strike and an additional mechanical delay, we finally arrived in Frankfurt on Saturday afternoon and booked another train to Freiburg since we missed our scheduled one. The rest of the day was spent showering, getting settled, having dinner, and meeting some local friends for a beer.

Sunday, we went to Titisee, the most charming little lakefront German town (as seen in the photo above). It was about 40 minutes southeast of Freiburg by train and we spent the day perusing the little traditional shops and eating authentic German food –see below… 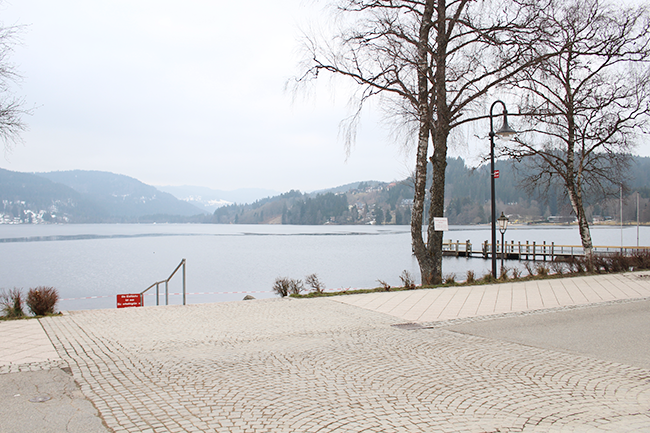 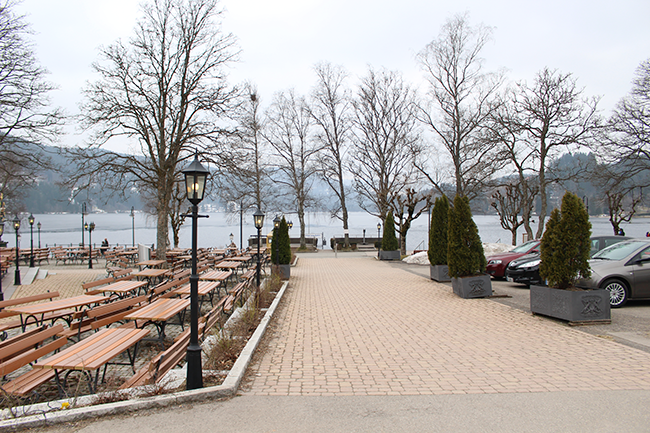 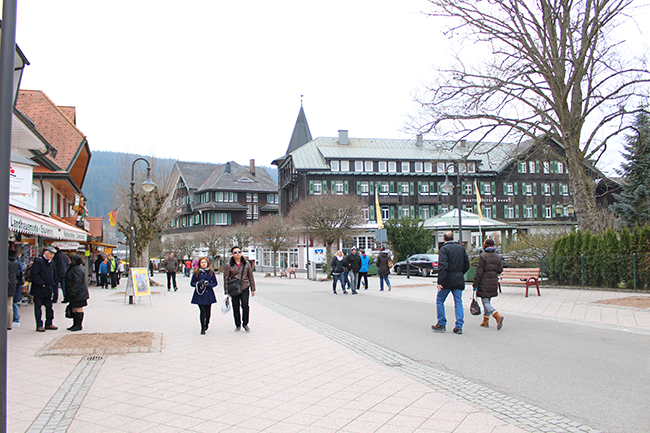 The most delicious traditional German food in Titisee…käsespätzle. It’s basically German mac & cheese and has grilled onions. I ate it two days in a row and am still thinking about it!

The next morning, we took a 45-minute train to Basel, Switzerland. We’d both been there before but it had been over seven years for me. I’m pretty sure we mostly saw a different part of the city than I’d previously explored, which was nice! 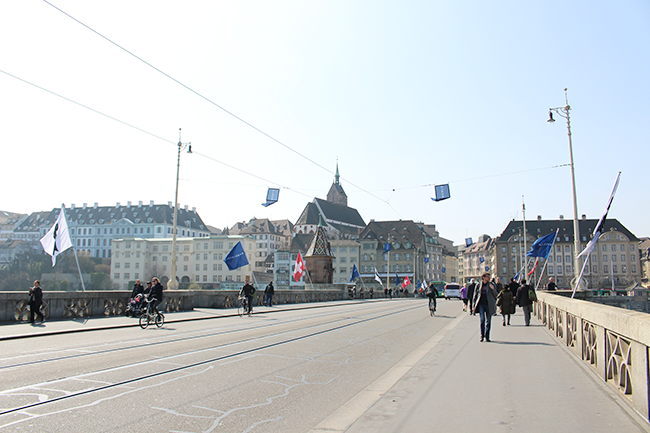 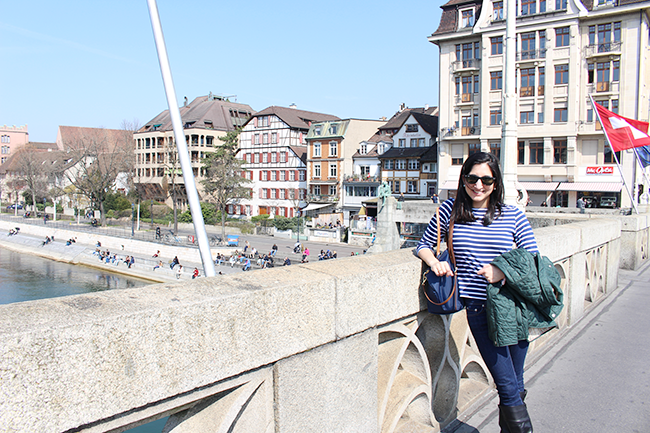 I didn’t take outfit photos for the blog on this trip, but I basically wore the above every day… these jeans or thick leggings, black riding boots, my trusty quilted jacket, and a simple tee with this really practical bag (monogrammed, obvi… a nice budget-friendly Longchamp alternative… I was looking for something with a crossbody strap option since I lugged a DSLR around). This was the only day I needed sunglasses and was the one time we didn’t have to layer on a scarf or extra sweater! Are you familiar with Baselworld? It’s world famous watch and jewelry show that draws the top brands in the industry and thousands of visitors every year. We basically walked right into the middle of the complex where it was being held and were surrounded by the classiest, most polished people from around the world. Unfortunately it was 60 Francs to get in and we’d have had to plan for it specifically, but it was such a pleasant surprise encounter! 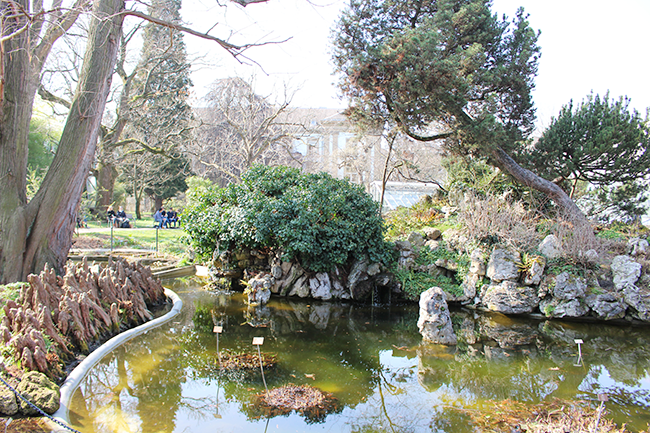 The botanical gardens at the University of Basel… off season and partially dead, but still pretty. The two times my family has visited Switzerland, we’ve eaten at Tibits. It’s a vegetarian/vegan restaurant that serves food by weight, hot bar style. It’s pricey as hell, like most of Switzerland, but also incredibly delicious. It’s been years, but it’s as good as I remembered! They also had matchbooks at the entrance (!!!) and I got one home by dumping out the matches themselves before flying. 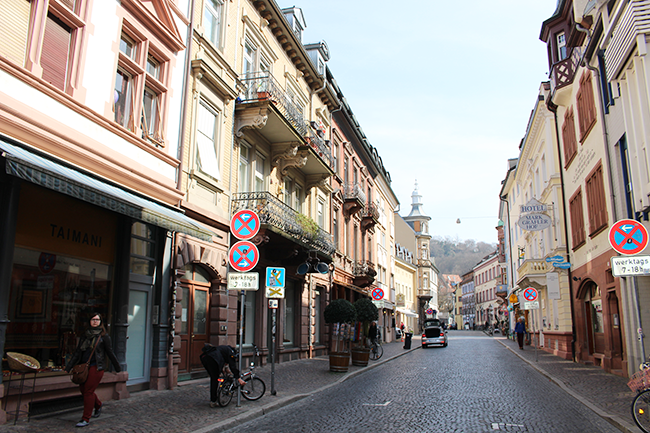 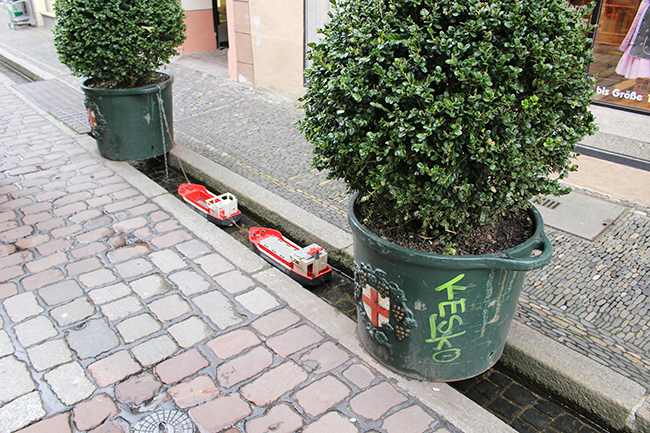 We stayed in the altstadt, which is the older part of the city. Only cars with a permit are allowed in and the streets are entirely made of cobblestone. There is this little river/stream-like thing that runs on the edges of the sidewalk throughout the whole altstadt. You have to hop over it when walking around and I was convinced I’d clumsily step in it, or that people did on a regular basis. Turns out that legend says that if you do fall in, you’re destined to marry someone from Freiburg… but my friend said she used to dip her feet in it during the hot summer, haha. The daily market in Freiburg… flowers, artisans, and bratwurst galore. Everyone was buying tulips and I was extremelyyy jealous. Handmade woodwork seems to be a pretty big thing in this region… shops in both Freiburg and Titisee had plentiful selections. I brought home a shallow little decorative bowl. Our view from a beer garden perched above part of the city. We walked straight uphill to get here and it was 100% worth it. The vineyard seen below belongs to the place where we had our private wine tour that afternoon and you could see out for miles! I want to do this every day. Eat perfectly crispy fries with mayo + ketchup (mixed together just a little bit) with a cold beer and have 2 hour long conversations about life with a bestie all while overlooking a German city. Skipping ahead to our last night of the trip here… we shared this yummy German dessert, panakuchen with berries in sauce and vanilla ice cream. After spending Tuesday in Freiburg indulging on bratwurst, beer, wine, and fries, we took an hour-long bus to Strasbourg, France on Wednesday. It’s definitely one of the most all-around picturesque cities I think I’ve ever visited. 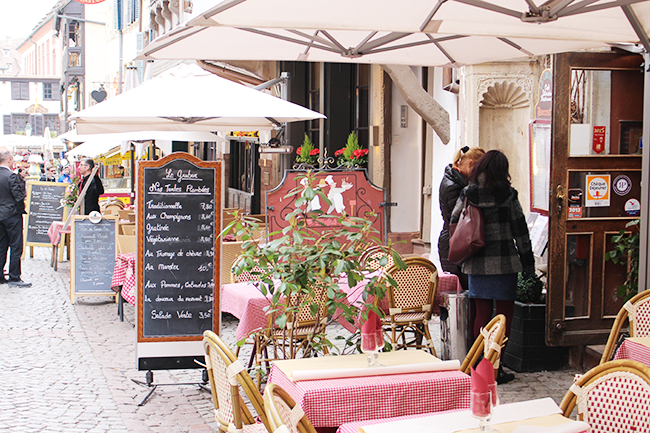 Very easily walkable, everyone was kind of surprisingly incredibly friendly, and I got to practice the minimal French I know. It was really cold and windy that day, but we survived. 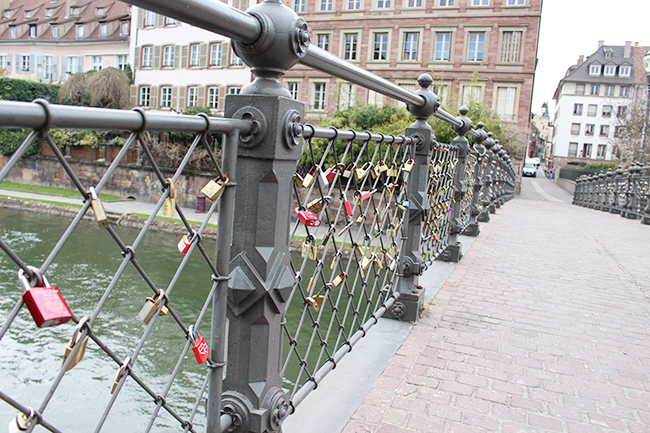 Saint James in France… damage was done here and I’m not sorry! Since we were shopping the brand locally, everything cost about half as much as it does in the US. Thursday was our last full day and we spent it in Freiburg, visiting the city’s cathedral, farmers market (again), eating, and going on short hike. The views were insane…. So there you have it, a pretty solid overview of our trip! There are many more pictures I didn’t share, but I think you get the idea with these :)

Prior to this trip, I’d been to Europe several times but almost always with my parents and never with friends. I “studied abroad” in DC my junior year of college so didn’t have the typical abroadie experience… the one time I had something similar was when I was 15 and on an exchange program in Northern Italy. Things were obviously a little different at that age. This time, we chose Freiburg as our home base because a) there was a direct flight to Frankfurt from Dulles and Freiburg was a two hour train from the airport and b) my friend who I traveled with studied abroad there, knows the city well, and speaks German.

I would definitely recommend Freiburg for someone who wants to get away from the more Americanized, touristy spots in Europe– people spoke English and were very friendly, but I don’t think I saw a single American tourist in the city when we were there. It allows for easy day trips over the French and Swiss border, which is one of my favorite parts about traveling abroad.

If you made it this far, thank you for bearing with my longest post to date, and please please let me know if you have any questions or would like to hear more!

I’d love to know, are any of you planning to take a European vaca soon? Where are you going? Please let me live vicariously through you :)

All photos by Monica Dutia