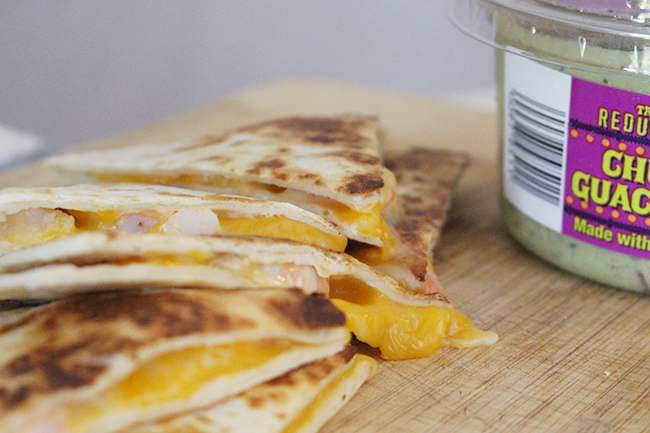 Cooking shrimp has always been really daunting to me. I attribute it to growing up in a primarily vegetarian household where my meat consumption was generally done out of the house and seafood wasn’t part of my diet. It wasn’t until college and my first that I developed a strong affinity for seafood– now, I can’t get enough!

Once I was finally convinced that shrimp is probably the easiest seafood to cook (yea, I consulted a couple of friends…), we planned to pick some up from the fresh seafood counter at Whole Foods. Due to time constraints, I ended up settling for a bag of frozen shrimp from Trader Joe’s– and it was already cooked! For some reason the pre-cooked bag was $7 less than the uncooked shrimp… no idea why. I’m sure some of you who are more familiar can answer that!

Basically, all it took was some thawing under the faucet and these guys were ready to pop into the tortilla. Another plus? I have so.much.shrimp left over. Now that I’ve discovered how easy they are to incorporate into meals, I’m sure you’ll be seeing some more recipes pop up over here!

– 4 large tortillas (I used flour)
– 18-20 medium shrimp, cooked
– Large handful of cheese for each quesadilla – I used a Mexican blend
– Toppings like: salsa, guac (ideally Trader Joe’s Reduced Guilt Guacamole, which is my absolute fav save for fresh guac), and chipotle mayo (see recipe below)

Spread chipotle mayo on tortillas (see recipe/instructions below). Sprinkle generous amount of cheese on one side of two tortillas. Arrange shrimp spaced 1/2 in or so away from each other on the cheesy side of each tortilla. About 9 or 10 should fit. Sprinkle with a little more cheese and add the second tortilla to close.

Grease a skillet on medium and transfer quesadilla. When pan is hot, cook for about 2 minutes until outside of tortillas is browning. Remember, the shrimp is already cooked so you don’t want to overcook it, just melt the cheese and crisp the tortillas!

Chipotle Mayo
For one quesadilla

In a small bowl, mix together mayo and spice until well combined. Add more spice as needed until flavor is satisfactory. Spread evenly on inside of one or both tortilla(s) before adding cheese + shrimp. 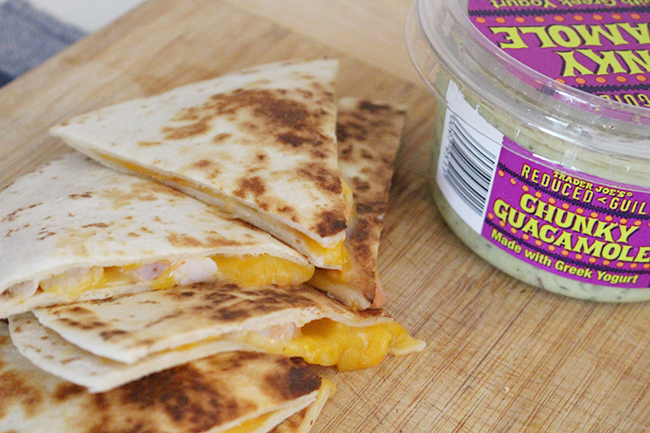