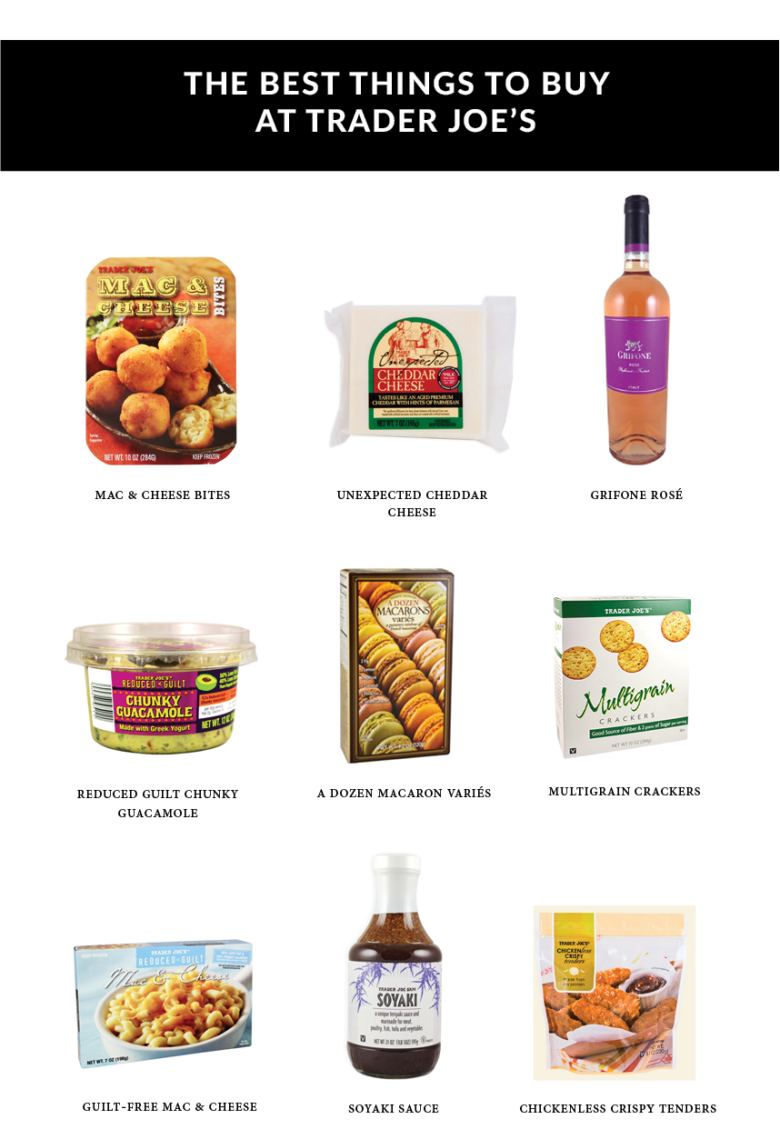 Do you guys shop at Trader Joe’s? If you’re fortunate enough to live by one, I can only imagine that many of you are like myself and have deemed it your grocery store of choice! While the stores themselves can be on the smaller side and a nightmare during peak shopping times (I’m looking at you, 6pm Monday-Friday and Sunday after noon), I’ve found shopping there to be much more economical than larger chains despite that those have weekly discount flyers.

Another perk? The selection of items that are exclusive to TJs. They carry some of the best frozen food and condiments, which makes not being able to get some of my favorite branded goods (like Eggo waffles, Toaster Strudels, “normal” peanut butter, etc.) more palatable. I thought I’d share my 10 favorite Trader Joe’s items that find themselves in my cart on a regular basis. Sorry in advance if you’re beelining for the store!

Mac & Cheese Bites: I’ll let the name speak for itself, and these are seriously as good as you’d expect them to be. They’re an easy appetizer to serve when having a few friends over (only 10 come in a box, so you’d have to buy several if you have a large group because these will go fast), or to have on hand when you need a snack or something to balance out the salad you’re convincing yourself to eat for dinner.

Unexpected Cheddar Cheese: Uh guys, this stuff is insane. If you love cheese (I won’t judge if you don’t, as I’ll assume it’s only because of an allergy or something), this needs to be at the top of your next grocery list. It’s like this unique combination of cheddar + parmesan that, according to their site, pairs well with a light red wine or pale ale. I personally think it goes well with just about anything, and am so grateful my roommate introduced me to this magical concoction!

Grifone Rosé: The best $5 you’ll spend in the wine section this summer. My wine knowledge is embarrassingly minimal and I’m not too picky with what I’ll drink, but I can’t help but reach for this particular Italian bottle (it comes from Tuscany) on repeat April–September. It’s everything you love about rosé in a pretty bottle with an even prettier price.

Reduced Guilt Chunky Guacamole: It would probably be sacrilegious to say this is better than regular guac–disclaimer: I wouldn’t go that far–but it’s so, so, so good! It doesn’t taste “reduced guilt” at all, just a little different than regular guac…but not in a bad way! I love eating this with sweet potato tortilla chips and adding it to quesadillas or nachos.

A Dozen Macarons Variés: Frozen macarons don’t sound all that appetizing, but these are surprisingly delicious. They’re a great deal (about $5 for a dozen) and while they don’t taste exactly like 12 freshly baked macarons from a local French patisserie, they’re infinitely better than you’d expect frozen macarons from a chain grocery store to be!

Multigrain Crackers: Sort of boring, but these are my go-to crackers to have on hand. I eat ’em with Nutella, cheese, charcuterie, peanut butter, et al.

Reduced Guilt Mac & Cheese: The best kind of “guilt free” dish is one that tastes completely “guilt-inducing,” and this entirely fits the bill. I’m pretty sure the only reason why it’s “reduced guilt” is because the portion is significantly smaller than the regular mac and cheese, but if you add a little something on the side, this is the perfect weekday lunch. I love having one in the freezer as a backup–and it’s only $1.99!

Soyaki Sauce: In my mind, this is like the ultimate Asian sauce (though there are still a bunch that I have yet to try!). I use it in stir fry, as a dipping sauce for some of TJs frozen dumplings, and on top of fried rice for an extra kick.

Meatless Chicken Tenders: Non-vegetarians, hear me out: these are delicious. Think of them the way you would veggie burgers…not as a replacement for beef (in this case, chicken), but as a separate entity entirely. These tenders make a great snack or meal, and are lighter/way healthier than the traditional fried chicken tenders we’d typically reach for.

Patisserie de Chocolat: So I couldn’t find a good photo of this online (couldn’t mess up the collage, you know?), but not enough good things can be said about this cake. I can’t even tell you the number of times I’ve bought this for no apparent reason at all and eaten a slice (or two) a day until it ran out. In order to exercise self control, I’ve actually been immediately freezing half so I can’t overindulge. But in actuality: highly recommend this if you’re entertaining a crowd and need a cake…it almost makes up for the fact that my Trader Joe’s doesn’t have a bakery section (almost…)!

So those are my top 10 picks, but honorable mentions go to: Two [Three] Buck Chuck, Garlic Naan and Tandoori Naan (frozen section), Cookie Butter, Joe-Joe’s (especially the peppermint ones over the holidays…but that’s another list for next fall), and Chicken Gyoza Potstickers (so good with the Soyaki sauce!).

Are you a TJs shopper with particular favorites, too? If so, leave them in the comments below so we can all drop everything and go grocery shopping!