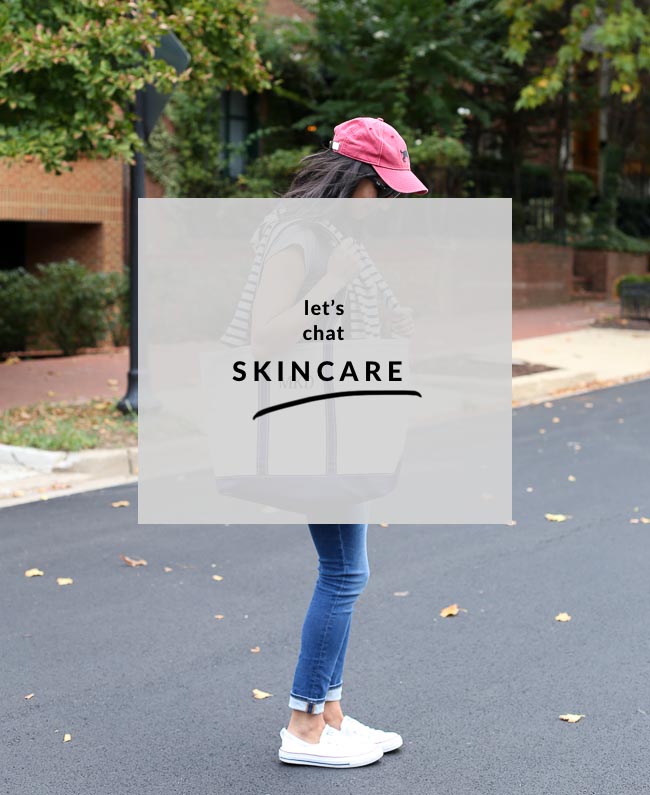 A version of this post has been sitting in my drafts for awhile, and I waited to hit publish for a couple of reasons. One, it talks about a bunch of products and when it comes to trying those, I like to use them as much as possible before sharing my experience. Second, it had the potential to get pretty lengthy, which I wanted to avoid. Definitely failed on the latter front, so feel free to skip to the products if you aren’t interested in a girl’s journey from terrible acne to much, much clearer skin :)

I’ll start by saying to definitely let me know/email me if you have any specific questions and I’m happy to answer them! This is kind of the cliff notes version, despite it being one of the longer blog posts on here.

I think my struggle with skincare started around when everyone got their first round of teenage acne, and really can’t remember if mine was any worse than those around me (I think it was? But obviously a young girl is going to assume her situation is so.much.worse. than everyone else’s). The main thing that perpetuated my issue was how that acne was combated; most people started going to a dermatologist and I saw one, too, but really did not like the guy. I pretty much refused to go back, and we just never found me a new derm. Unfortunately this meant that a lot of my acne issues were being diagnosed by and treated with products featured in Cosmo and on TV commercials. That route probably would have worked well for some, but if you’re genetically predisposed to breakouts and scarring…well, that St. Ives Apricot Scrub really isn’t going to do the trick (as an aside, were you obsessed with that scrub? So many people seemed to swear by it, but it made me break out so badly!) 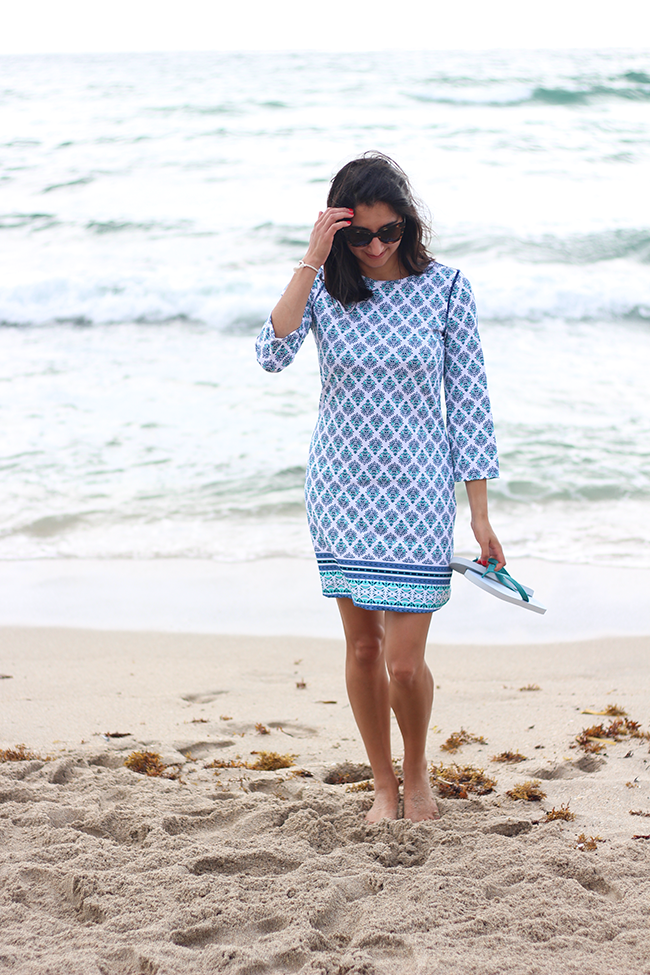 Anyway, fast forward to the end of high school and beginning of college…by then I’d tried a couple different topical prescriptions recommended by my general physician, and she’d said going on birth control would help things improve, too. My skin certainly cleared a bit, and thankfully I wasn’t super insecure about breakouts throughout college because other than a few minor incidents here or there (which were nothing this spot treatment couldn’t fix at the time), my acne was relatively under control. I honestly don’t remember what exactly my routine looked like but am pretty sure all it included some random topical prescription at night and Clearasil Ultra in the morning + before bed. No frills, super simple! (And no moisturizer, at least not regularly…baddd). The one thing I wasn’t addressing, though, was the scarring left from my teenage years and the scars that continued to form when I’d get impatient with slow-to-heal breakouts. I scar really easily (everywhere, which sucks #legscars #clumsy) and aside from falling for Clinque’s advertising and purchasing this spot lightening product, which yielded no results, I did nothing to address these spots and instead relied on concealer to cover them up. (I will say I exclusively used Clinique products for all my makeup at this point, as well as random skincare stuff here and there…it was great most of the time, aside from the lightener and everyone’s favorite moisturizer.) 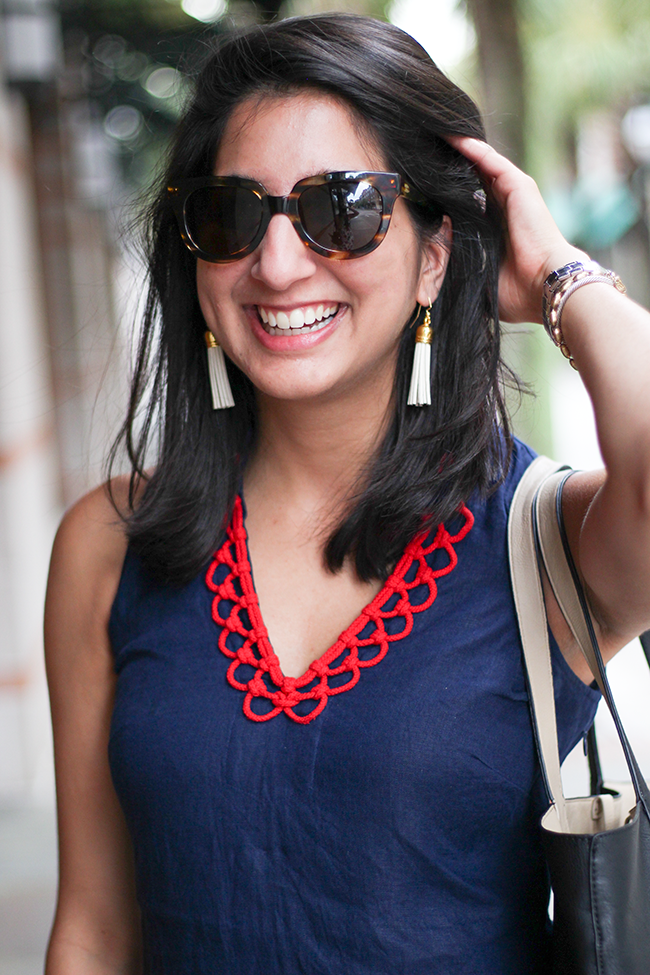 So yeah, I basically continued along with this regimen after college and until my topical prescription ran out, at which point I think I was just moisturizing (had finally added this to my routine), using Clearasil, and treating flareups with a spot treatment. Pretty sure there was also a phase between college + post-grad where baking soda was my face scrub. We were coasting; my skin was fine, not great, but not totally a disaster…and then the 2015-2016 holidays hit. Guys, I don’t know what happened, but I was home visiting family and had the worst breakout I’d had in years. Traveling typically wreaks havoc on my skin and going home to Texas typically doesn’t usually help, but this was really, really bad, and painful. I panicked, asked a friend in DC for her dermatologist, and made an appointment to see a PA in their office three weeks later in January. The doctor was great–I still go to her!–she prescribed me another topical cream, a short antibiotic, and had me buy a derm-strength lightening serum and scrub to use in the mornings. To say I was skeptical would be an understatement, but I walked out of there $150 later with a bag of products that I can safely say has helped my skin look better than it has since I was approximately seven years old. 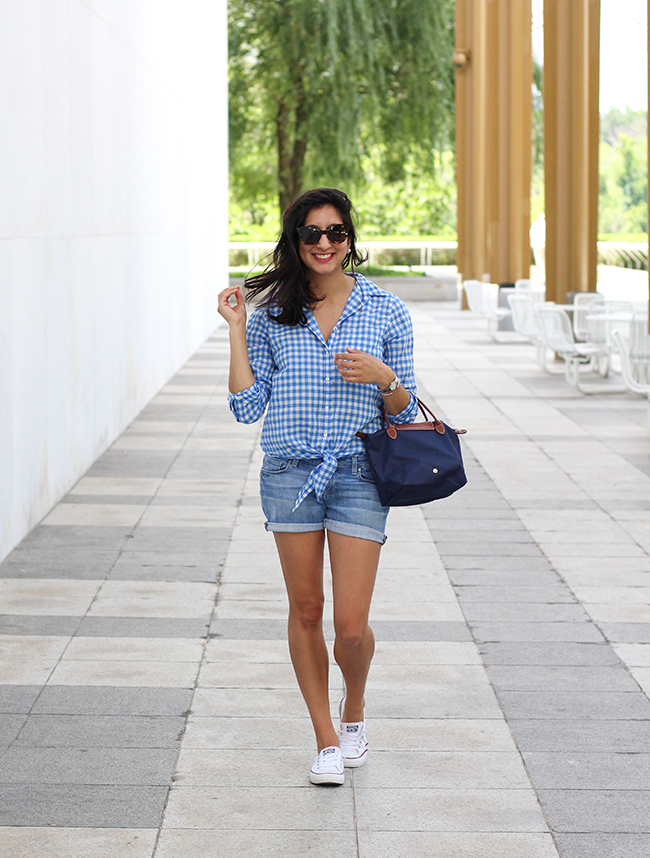 I don’t want to go into prescriptions, etc. here because a doctor I am not, but what I will say is if you’re battling acne and/or scarring, it’s worth seeing a derm. I fought it for so long and seriously regret it, but in the past 1.5 years can count the number of “flare ups” I’ve had on one hand. Worth it!!

Now, onto the more fun stuff/what I’m doing now. I still use the prescribed topical cream from my derm in DC (nightly), as well as the lightening serum 2x/day (morning + night). I also wash my face with the light scrub each morning in the summer (and generally every other morning in the winter, or even less if my face is extra dry), and use this gentle CosMedix cleanser with my Foreo at night. My derm also recommended a peel–I did it in September and while quite pricey, it definitely helped with scarring and starting to even out my complexion. The plan is to get another one this fall…ideally I’d have done it sooner, but you can’t be in the sun for a couple days and it’s helpful to budget for them. Along with what my derm recommended, I’ve incorporated a serum, moisturizer, and eye cream (love this one and this one, both from IT Cosmetics). And an even more recent addition–what the rest of this post focuses on–is masks! Everyone and their mother seem to be obsessed with them, but they aren’t something that appealed to me as someone so prone to breakouts. The idea of letting something sink into your skin and crossing your fingers things would end well is pretty much the worst if your struggles have been anything like mine! 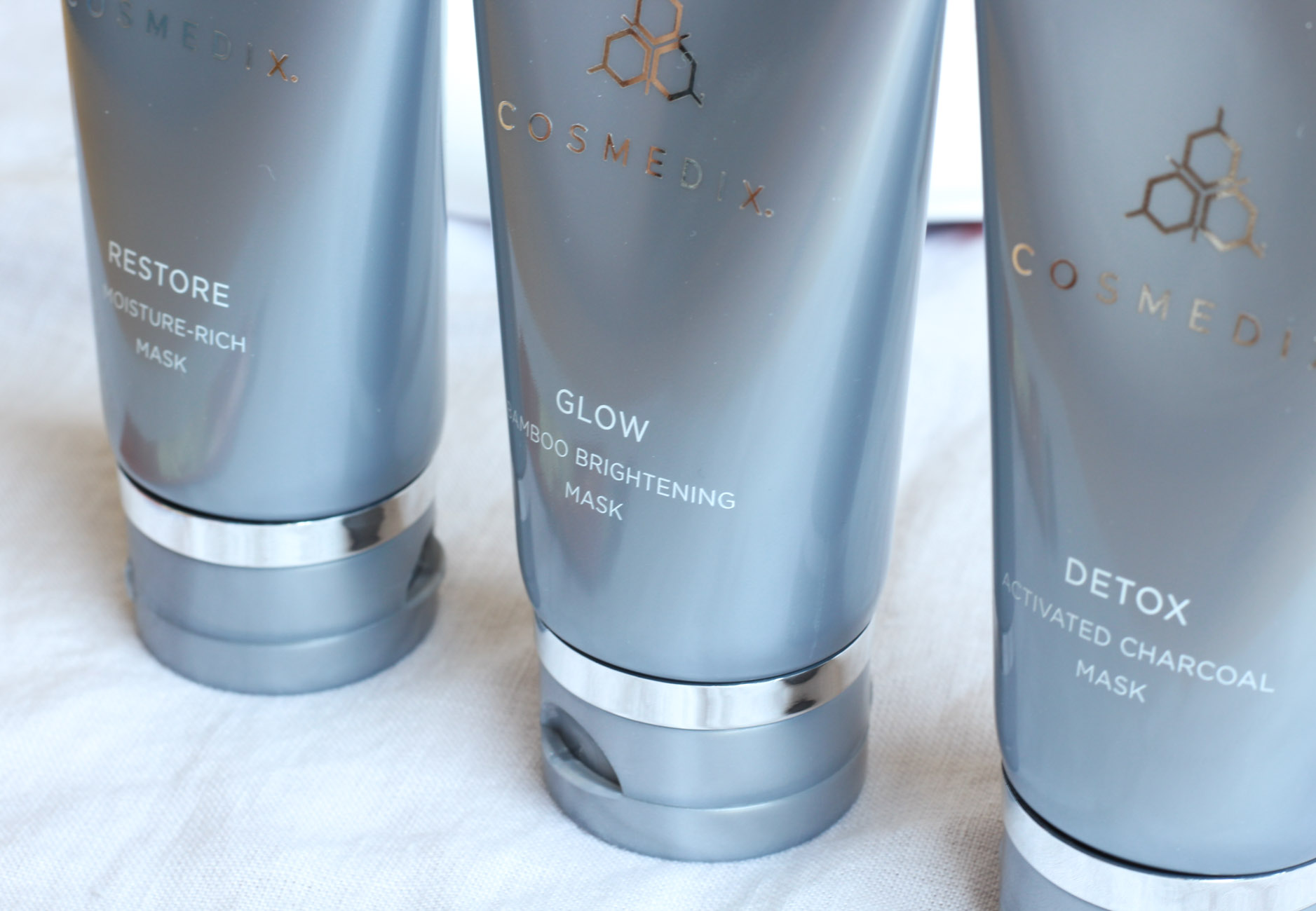 Luckily, I’ve found four masks I love and am excited to share them with you, along with a couple of other products that have been working overtime around here.

CosMedix Glow Mask: I like that this has a scrub-like texture…it really lets you know it’s working, and my skin always looks brighter the morning after using it. I haven’t specifically noticed it helping fade my dark spots, but as previously mentioned, those are a beast of their own and I don’t use this mask solely frequently enough to be able to tell if it’s helping that individual problem. What I will say is that it’s a brilliant option for an exfoliating mask, if you’re in the market!

CosMedix Restore Mask: If your skin is craving moisture, this mask is for you. I tend to forego moisturizing excessively in the summer (my combination skin will easily look oily) and this is the mask I reach for when dry patches start to appear. It leaves your skin feeling so incredibly soft! I’ve only used it at night, but it can be used during the day as well.

CosMedix Detox Mask: This is CosMedix’s charcoal mask and it would be a great foray into charcoal if it’s something that intimidates you. It totally cleans out your pores, which is why I like using it after a long day out. Similar to the Beautycounter one below, but less intense yet still effective.

Beautycounter Charcoal Mask: This is mask is pretty much what you need when you want to pull everything out of your pores–I use it when my skin feels the dirtiest (after a long summer day outside or a baseball game, etc.). And yes, it’s similar to the Detox Mask, but I think it’s more intense in that it feels stronger on (like very tight and dry) and I do think it gives me a deeper clean than any other mask I’ve used–at least my skin feels that way. Probably a bit intense if you’re wary of masks but I LOVE it! (PS: their packaging has changed since I got this!)

Palmer’s Cocoa Butter: You may have heard of pregnant women using this for stretch marks, but it’s actually turned into my favorite daily moisturizer. It doesn’t feel greasy or too thick once you rub it in, and the Vitamin E apparently helps fade scars (yep, have ’em all over my legs, too!) Bonus: it’s super cheap and can be found at any drugstore.

Crabtree & Evelyn Gardner’s Hand Therapy: Throwing this on there because everyone still needs a good hand cream in the summer…it’s the BEST! I’ve been using it for years and it’s such a good value for the money. It also makes a nice gift for a girlfriend or house guest :)

IT Cosmetics Confidence in a Cream: This is my favorite year-round moisturizer. I use this a lot in the winter but it goes on super thick, so is overkill in the summer. The Confidence in a Cream is the perfect consistency and hasn’t aggravated my skin at all, which is really saying something based on past moisturizing experiences.

PS: A note that while many of these items were gifted, I’d 100% buy them again on my own. I’m grateful they came my way because given my not so great past with skincare, I’m typically reluctant to try anything new and would probably not given them a shot. Also, if you’re curious, I still use everything in this post and this one, too.

I’m going to start talking more about products I use regularly and how I swear by minimal makeup despite scarring and these issues (let’s just say there’s a tinted moisturizer out there that delivers!)–but definitely let me know if you have any specific questions, and feel free to share your own experiences, too :) 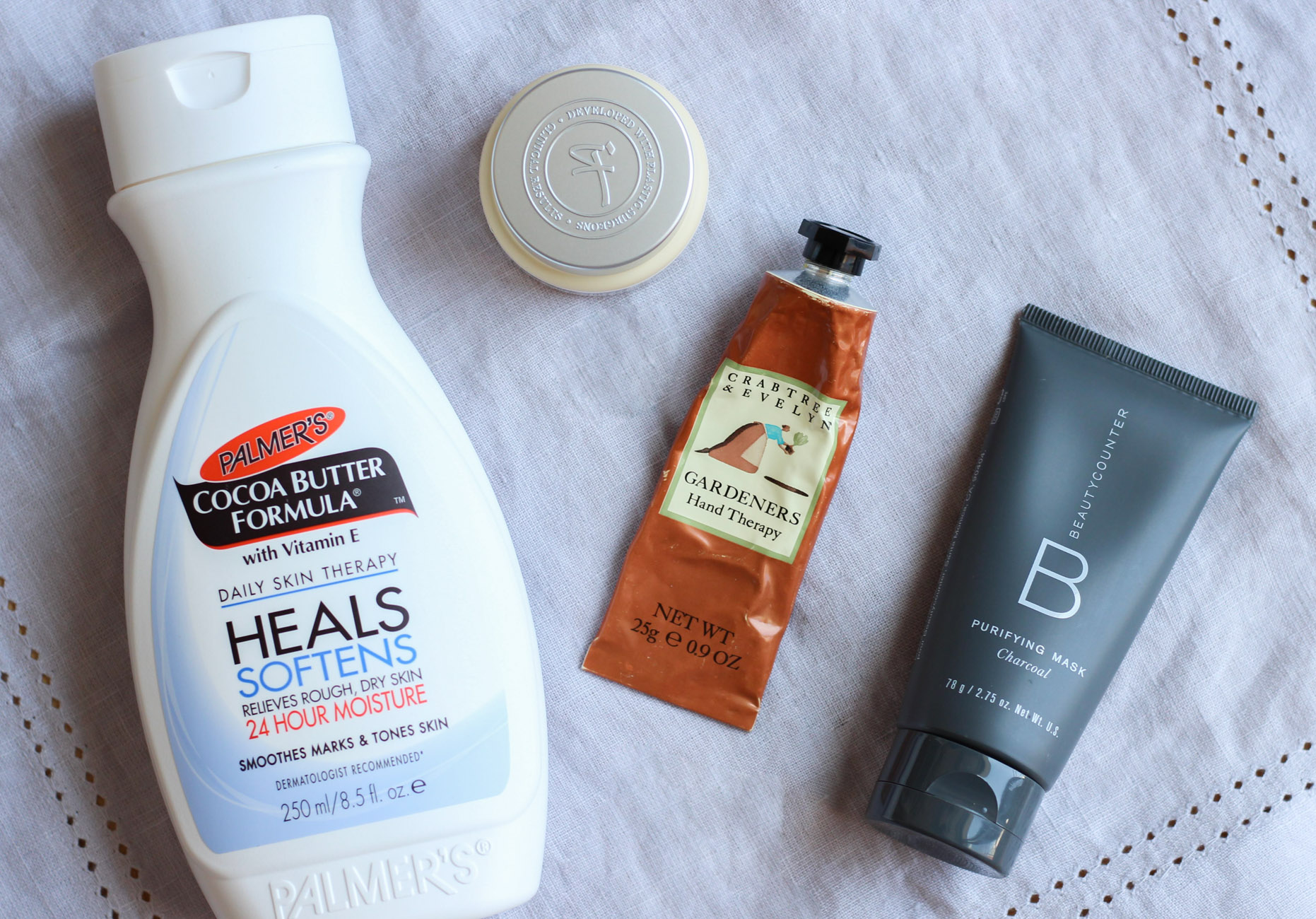