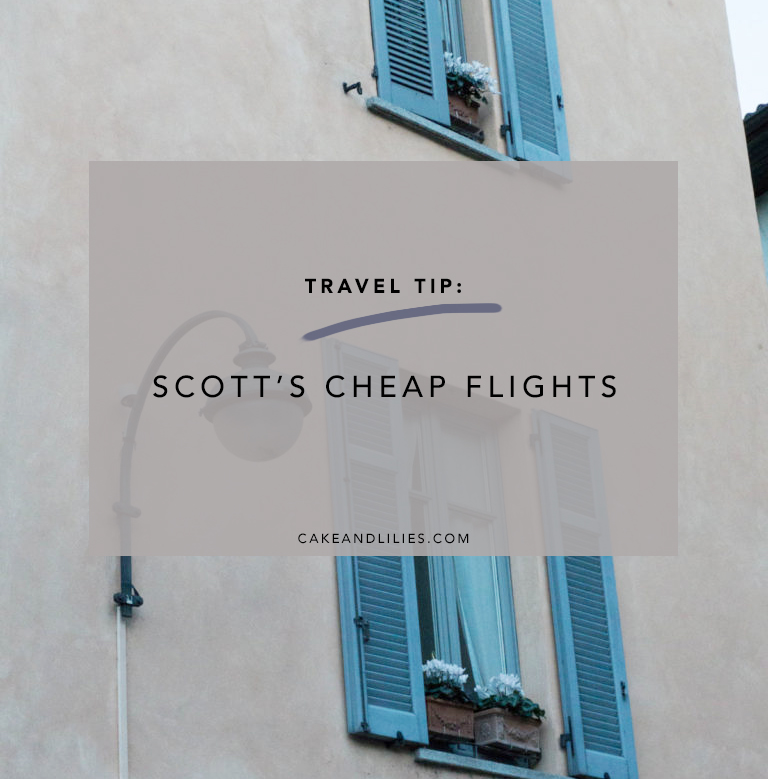 In the spirit of having attended an informative travel hacking event hosted by Ashlee and Richard on Saturday, I wanted to talk more about one of my favorite travel resources that I’ve mentioned in passing before but not really delved into. It’s something I’ve shared with a lot of people individually–cheap flights and trips abroad are frequent conversations had among my friends and coworkers–but it definitely deserves its own post!

Enter: Scott’s Cheap Flights, which is one of the best travel resources I’ve ever found. Basically, Scott–he’s an actual person!–is an expert in scouring the internet for great deals on international flights. You can sign up for his emails and receive a message when a great deal pops up. You typically do have to move fairly quickly to book (he’ll predicts how long he thinks the deal will last), but it’s no different than the other times you see a good flight deal! If you have the free version, you’ll get lots of deals from every origin and if you opt for the premium subscription (as little as $3.25/month), you’ll get to customize your departure airports and will get every flight deal he identifies. I’ve found that the free version is still great, especially if you’re passively considering a trip and are flexible on where to go, but the catch is you only get a third of the deals he finds. I’ll note that there is, on average, still at least one email a day but you might not get something departing from your home airport. The paid version would be ideal if you’re definitely trying to take a trip in the next year and want to consider all your options.

Here’s a sample of what the emails look like. This one came through yesterday for flights to Barcelona. Note that no DC-area airport is on this list, but I don’t mind doing a quick skim to figure out if the deal applies to me or not. A lot of times, I’ll end up forwarding something to a friend in another city who may be interested!

Scott also finds “mistake fares” fairly often, so if you’re quick and have schedule flexibility, that’s something great to take advantage of. One thing to note is that most of the deals are for economy class, since business and first class “deals” are really tough to find. Just something to keep in mind if you’re trying to plan a splurge-worthy vacation! (If you are more keen on business + first class travel without breaking the bank, explore Richard’s Facebook group and The Points Guy–travel hacking is real, guys!)

So yeah, while I haven’t actually booked one of the flights from Scott’s email (we found our $465 flight to Zurich last year by me randomly browsing Google Flights), I’ve gone through the steps to find the deal several times–as in, they do exist and aren’t just stated in the email!–and we actually came this.close. to booking a trip for the fall before realizing a potential conflict right before entering payment info. This is the real deal, and worth the extra email in your inbox if you have any desire or plan to travel abroad in the coming months.

Do you use Scott’s Cheap Flights? And are there any great travel deals you’ve scored lately?