With record-breaking cold temperatures across much of the US right now, many of you are probably dreaming of warm weather escapes–the beach, Southeast Asia, even just California or Florida for those of us on the east coast! But one place that’s notoriously cold this time of year has been on my mind: Maine. J and I have been talking about making a trip for the past two years and I’m really hoping we can swing one this spring, even if it’s just for a three day weekend. I’ve never been and growing up in Texas, it felt so far away…now we’re quick flight away so there’s no excuse!

Growing up, one of the only places I’d heard of in Maine was Kennebunkport–it was familiar to Texans because of the Bush family compound. (Little did I know that a few years later, I’d fall hard and fast for L.L. Bean :)) Anyway, a few months ago, I caught glimpses of the Kennebunkport Inn and was immediately smitten by its simple yet refined, coastal New England aesthetic. I grew up staying in mostly chain hotels when we traveled as a family and definitely see the appeal in building up loyalty with a chain or two (#superintocreditcardpoints), but have found myself gravitating towards boutique properties, particularly in smaller cities or towns. They generally do a much better job embodying the local culture, have some kind of local history, are more charming, and have personalized/superior service.

The Kennebunkport Inn has quite the past–it was originally a family home for seven generations in the late 1800s and was later rebuilt as a wealthy estate in the early 1900s. Years later, the home was purchased by new owners and reopened as an inn, which is what it’s been since then (under the care of several different owners). The property became part of the Kennebunkport Resort Collection in 2009, and the updates managed to strike the balance of updated and modern with classic period style. Example: the restaurants/bars below…dark wood + blue and white stripes and a bright white fireplace and cabinetry. You probably know by now that mixing modern and traditional elements aligns with my own personal decorating style, so naturally it’s all heart eyes over here! 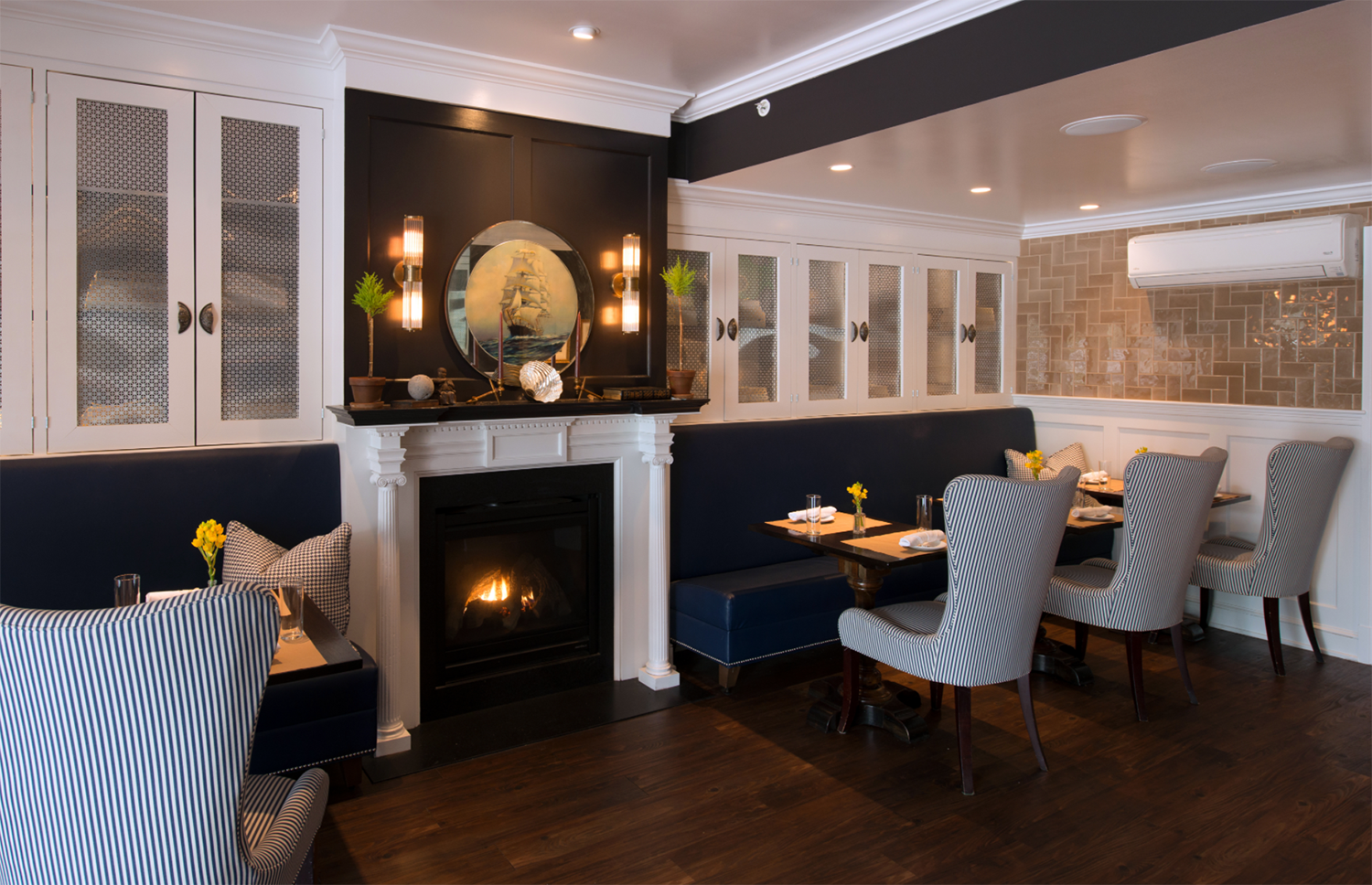 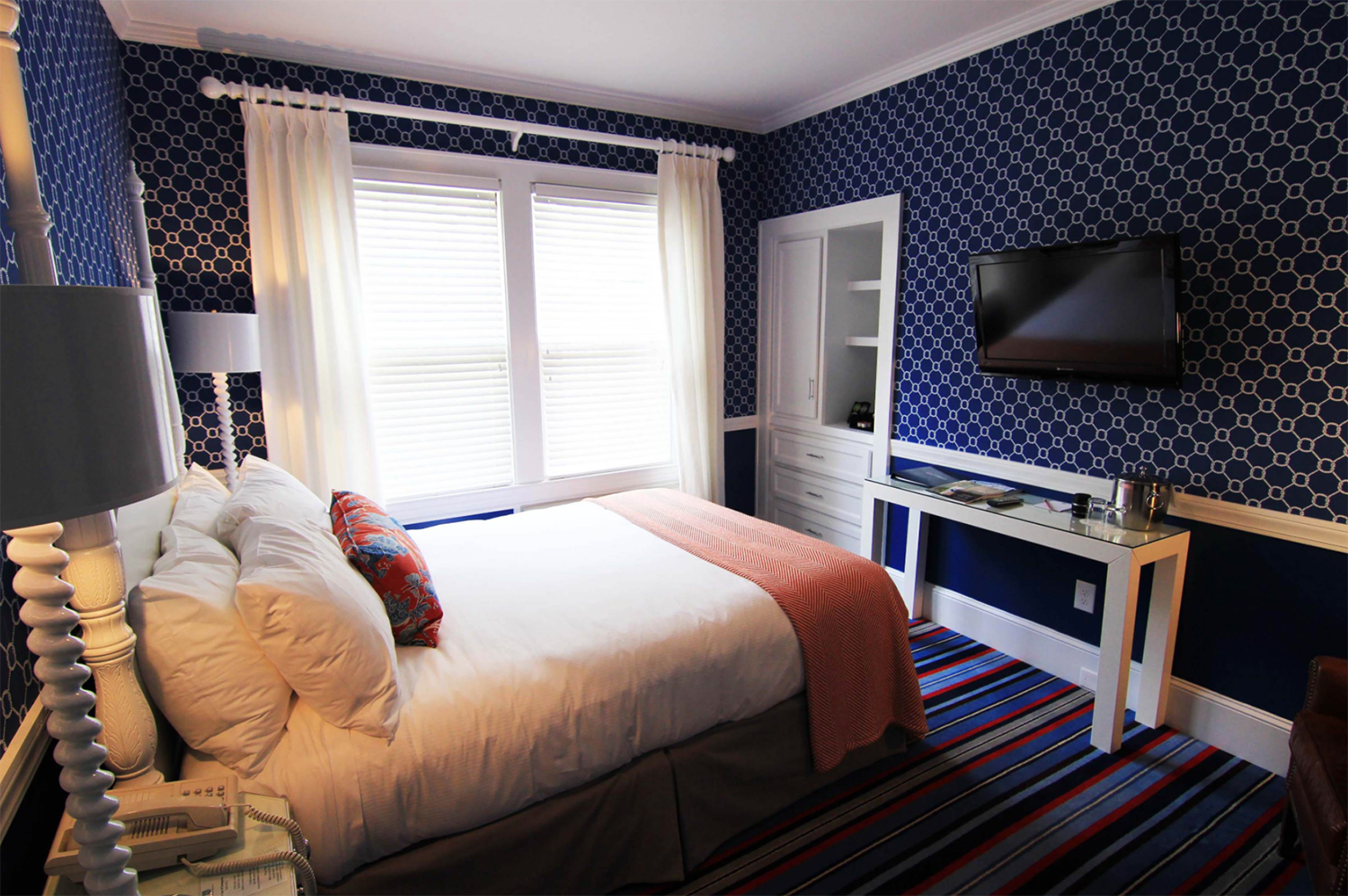 I love how the rooms are so clean and simple without extra frills–they’re so on-brand and functional but aren’t overwhelming or frumpy (the latter that easily exist in a historic property!). Don’t even get me started on built-ins and tufted leather bench below…is anyone else majorly inspired to rearrange bookshelves and accents right now? So yeah, Maine doesn’t look so bad right now, does it? Even though the patio is certainly closed for business, I wouldn’t mind spending a wintery weekend here and exploring the town in the off-season. I’ve made several trips during off-peak times (Lake Como + Lucerne + Zurich, Palm Beach, and Bangkok, to name a few) and truly can’t recommend it enough. Not only are accommodations less pricey, but you get a real feel for how the locals live!