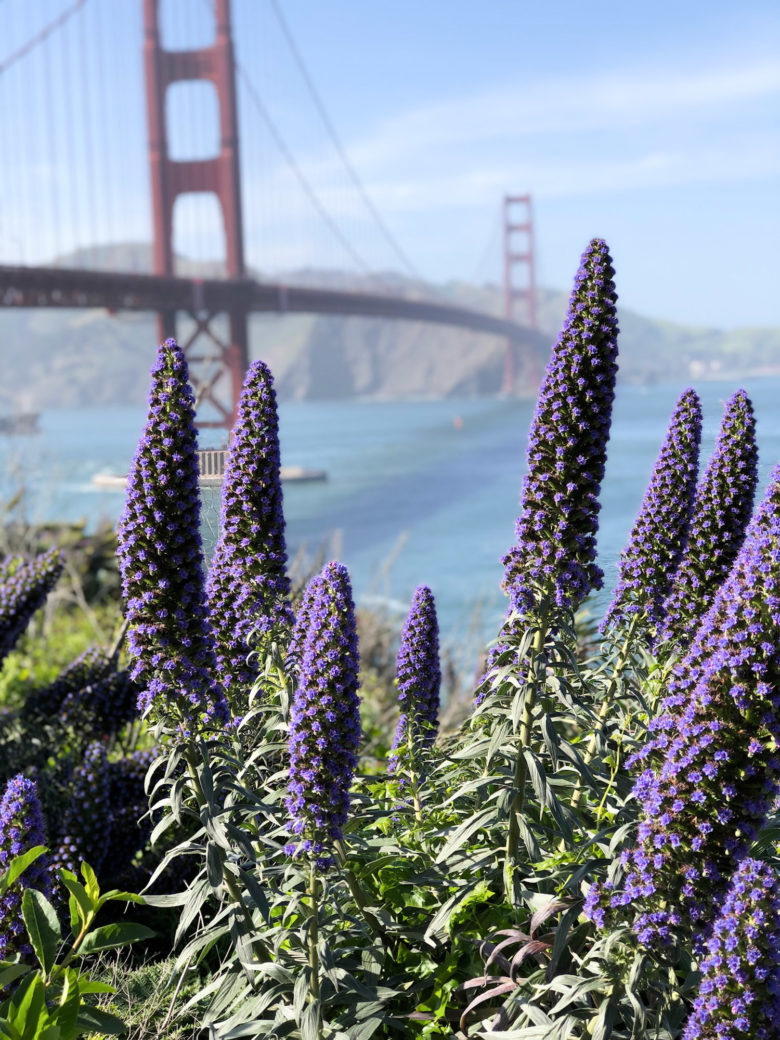 I knew this would be the case when we booked the trip, but four days in California was not enough! We flew direct from DCA to SFO late Friday afternoon and got in around 8:30pm. The first two nights were spent in the Palo Alto/Sunnyvale area with my cousins–we had lots of fun catching up with family and eating great food. We took the Cal Train up to SF on Sunday afternoon and checked into the Westin St. Francis at Union Square. It was a bit of a splurge but the location was central, the hotel looked beautiful (the recently updated rooms are NICE) and we like accumulating Starwood points when possible.

Since we only had late afternoon Sunday, Monday, and a couple hours on Tuesday morning, we planned to tackle some of the big sites and squeeze in some good meals. J hadn’t been to SF so we hit the highlights: the Golden Gate Bridge on Sunday afternoon followed by a bite at Souvla (more on everywhere we ate, below) a walk back to our hotel, and drinks at the top of the Hilton. Since we didn’t have dinner per se, we stopped at this random sushi restaurant across the Hilton on the way back to our hotel and snacked on a couple rolls before calling it a night.

We woke up early on Monday and took one the renowned cable car from Market Street (conveniently right by our hotel) to Lombard Street at around 7am. I was so excited to get both an empty cable car and views of Lombard, but of course a tour group of about 50 people took the cable car with us. That wasn’t ideal but they moved on from Lombard quickly, so we had it all to ourselves for a few minutes. I highly recommend going early to avoid the crowds…it was so cool watching a handful of people drive down–one even looked like a dad taking two young boys to school–and we saw one of the residents walking out of her home, which was casual but surprisingly cool? 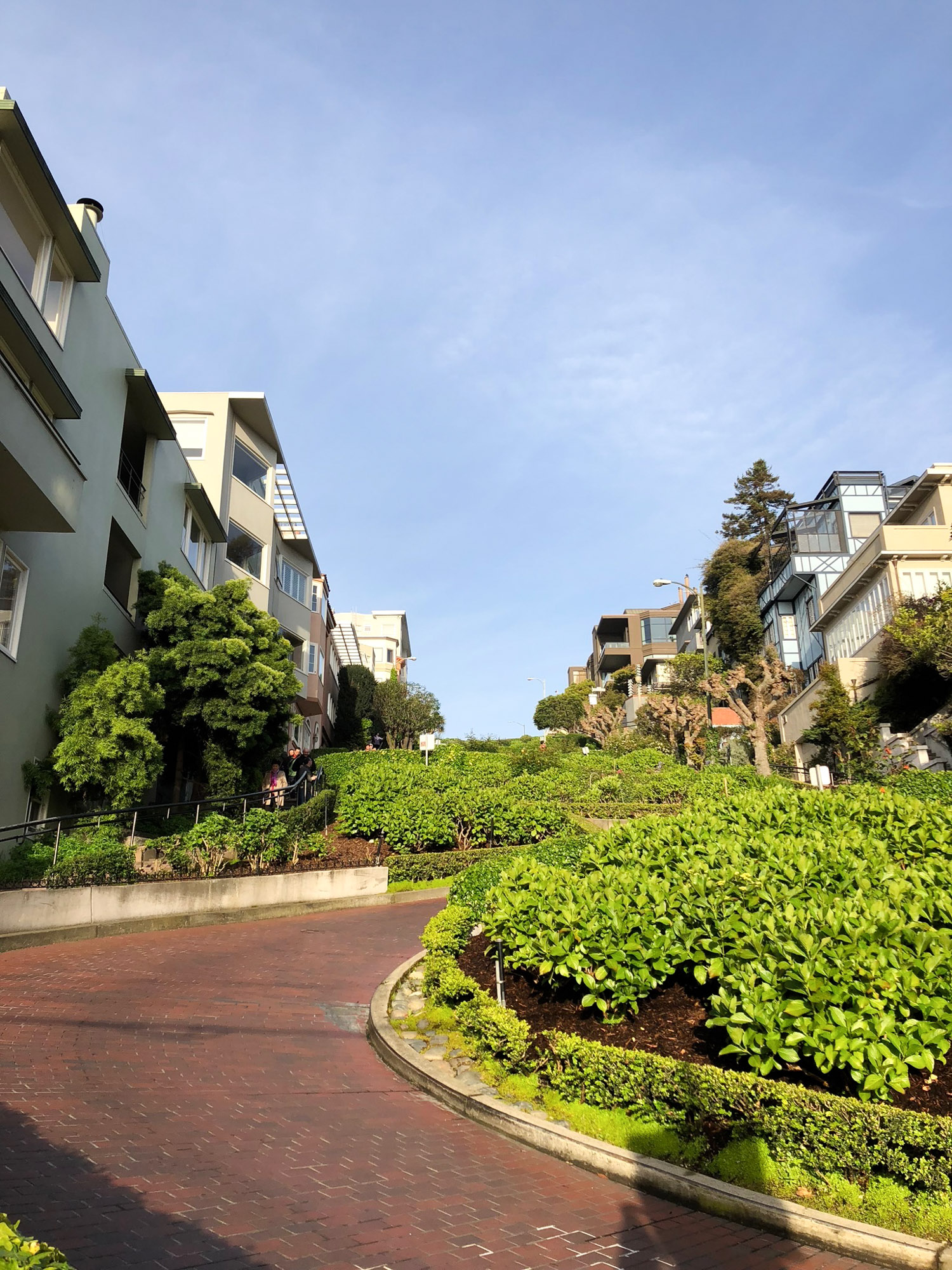 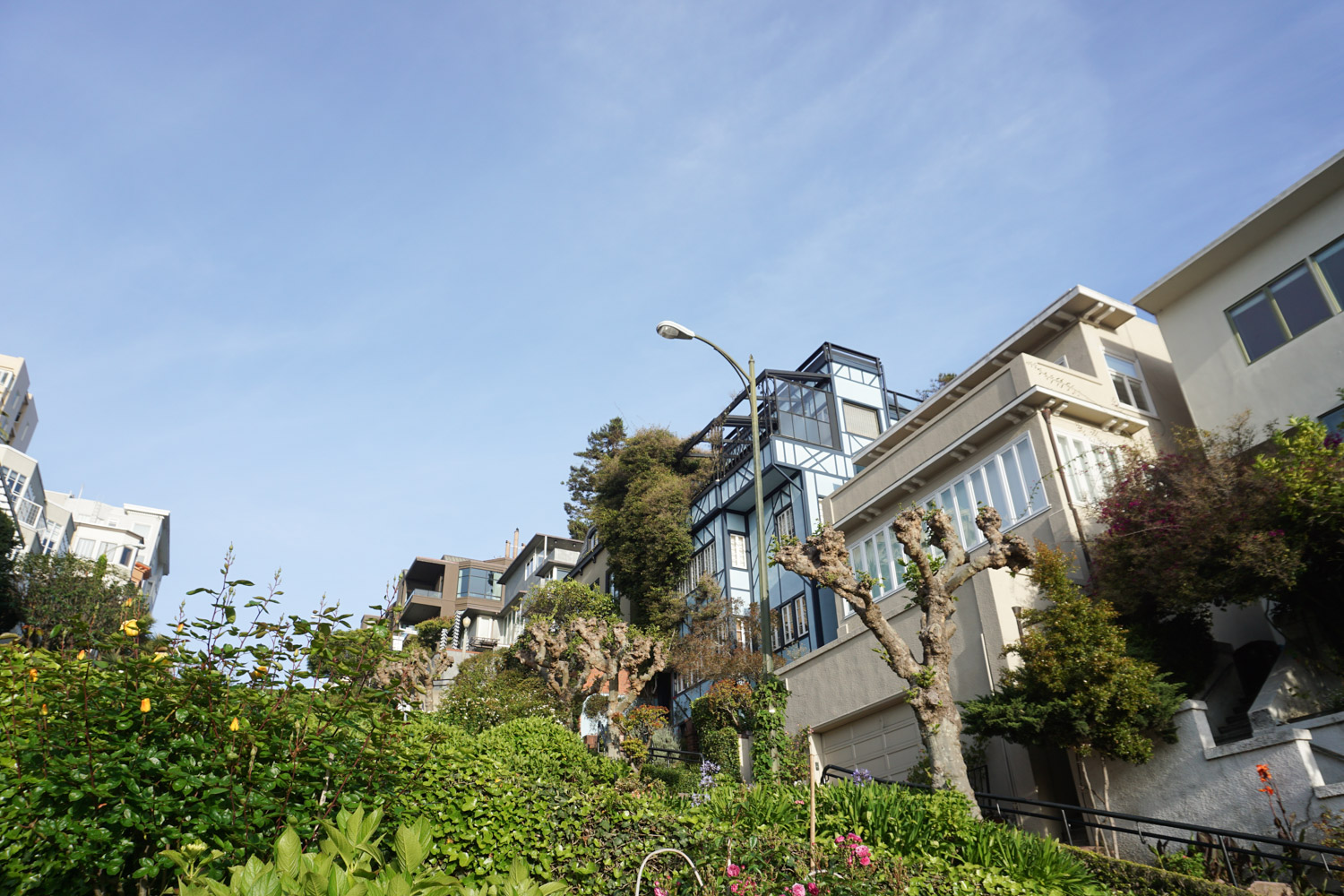 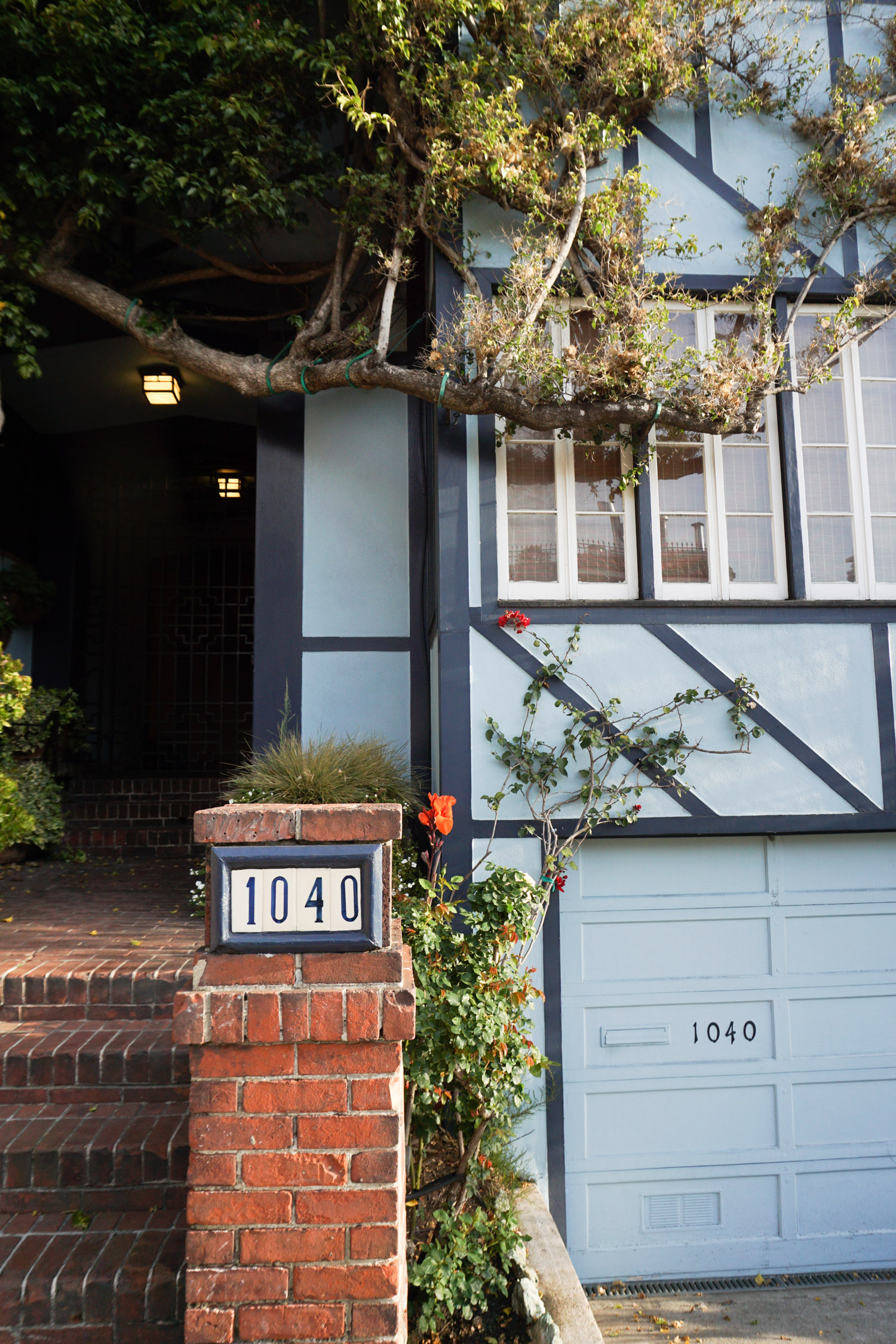 After Lombard Street, we walked down to Fisherman’s Wharf and had breakfast at this little placed called 8am Diner. It was good, not great, but was open early and was conveniently located. Ideally we’d have gone to a less touristy spot but the other places we wanted to go were about a mile away and with SF’s hills, we didn’t know what we were getting into on the walking front. We finished breakfast before 9am and walked through Pier 39, Fisherman’s Wharf, and Ghirardelli Square. The restaurants and shops were just opening up and it really made for the perfect time to explore: sans crowds, cool and breezy but comfortable, and with an overall less “touristy” vibe. If you’re not interested in the food and retail, go early and spare yourself the chaos. 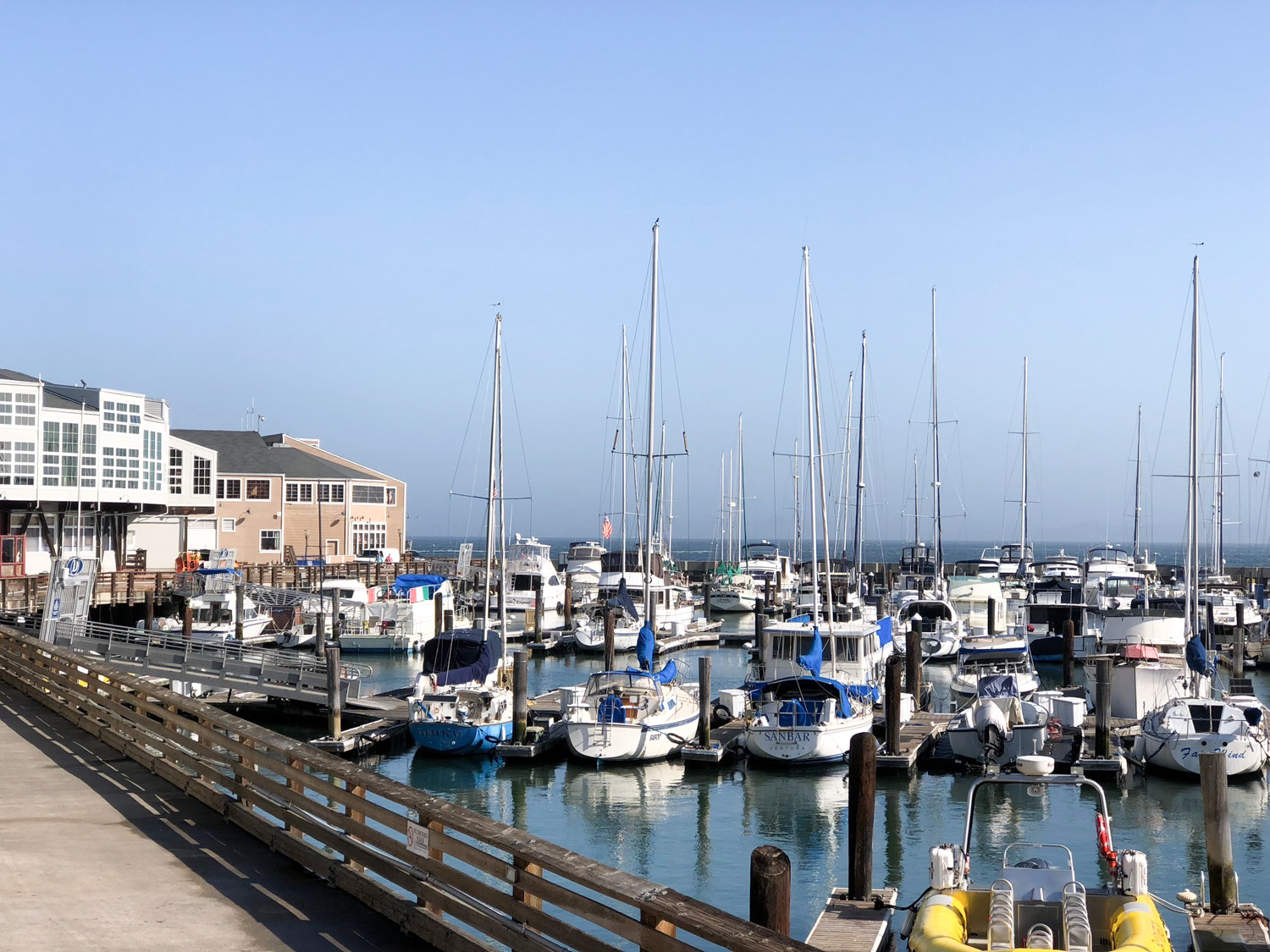 I had plans to meet Jillian and Emiliee, the girls behind Sweet & Spark (who I do freelance design work for!) for lunch at Little Gem, so we Ubered over to Alamo Square to see the Painted Ladies, and walked around the nearby Hayes neighborhood until noon. We checked out the S&S studios and had a quick meeting after lunch, after which J and I headed to the Everlane store–something I was so excited to check out. Having been a fan of the brand since the year they launched, it’s been so cool watching them grow their offerings and establish a brick and mortar all while maintaining the same pricing transparency and integrity they’ve had all along. 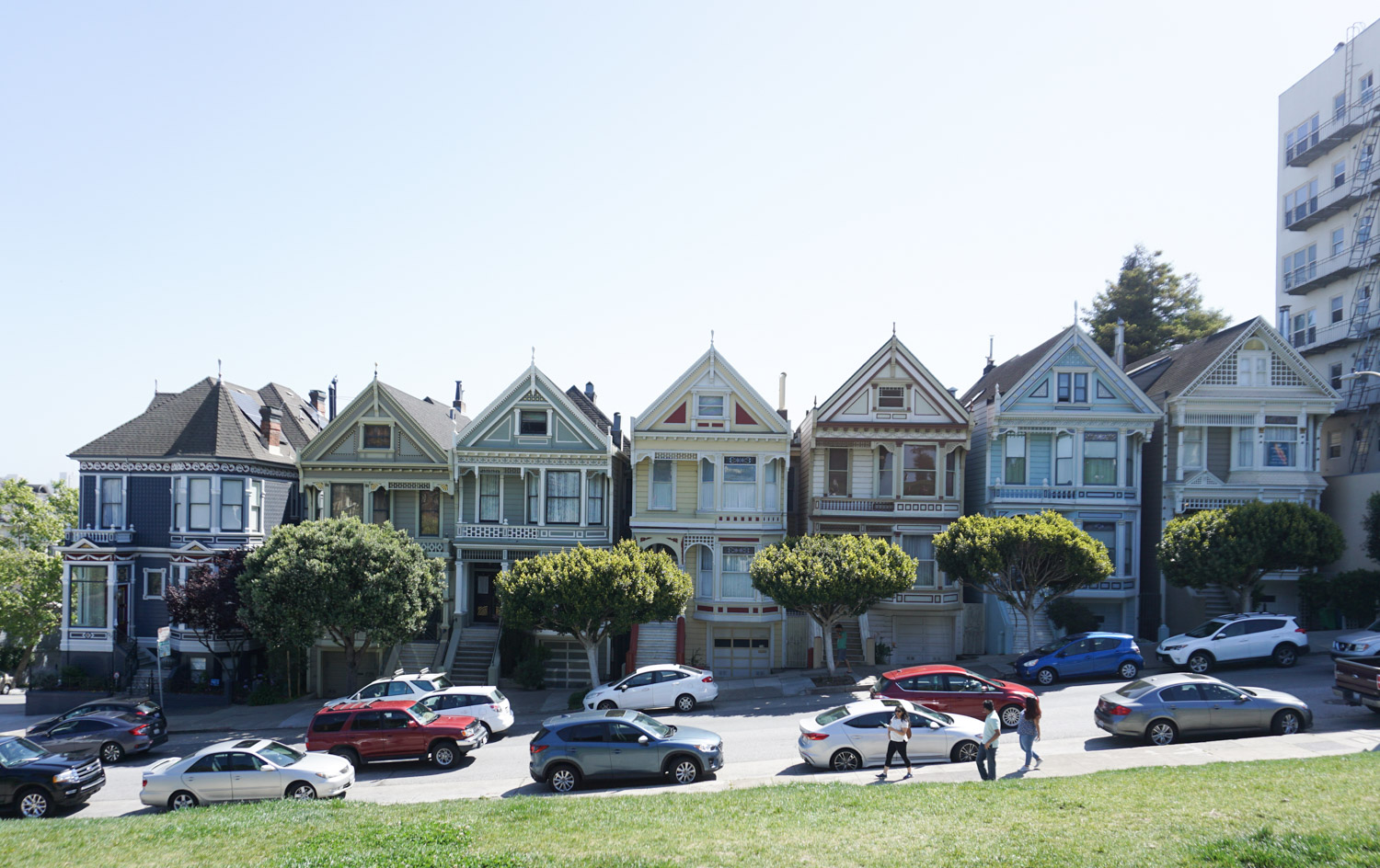 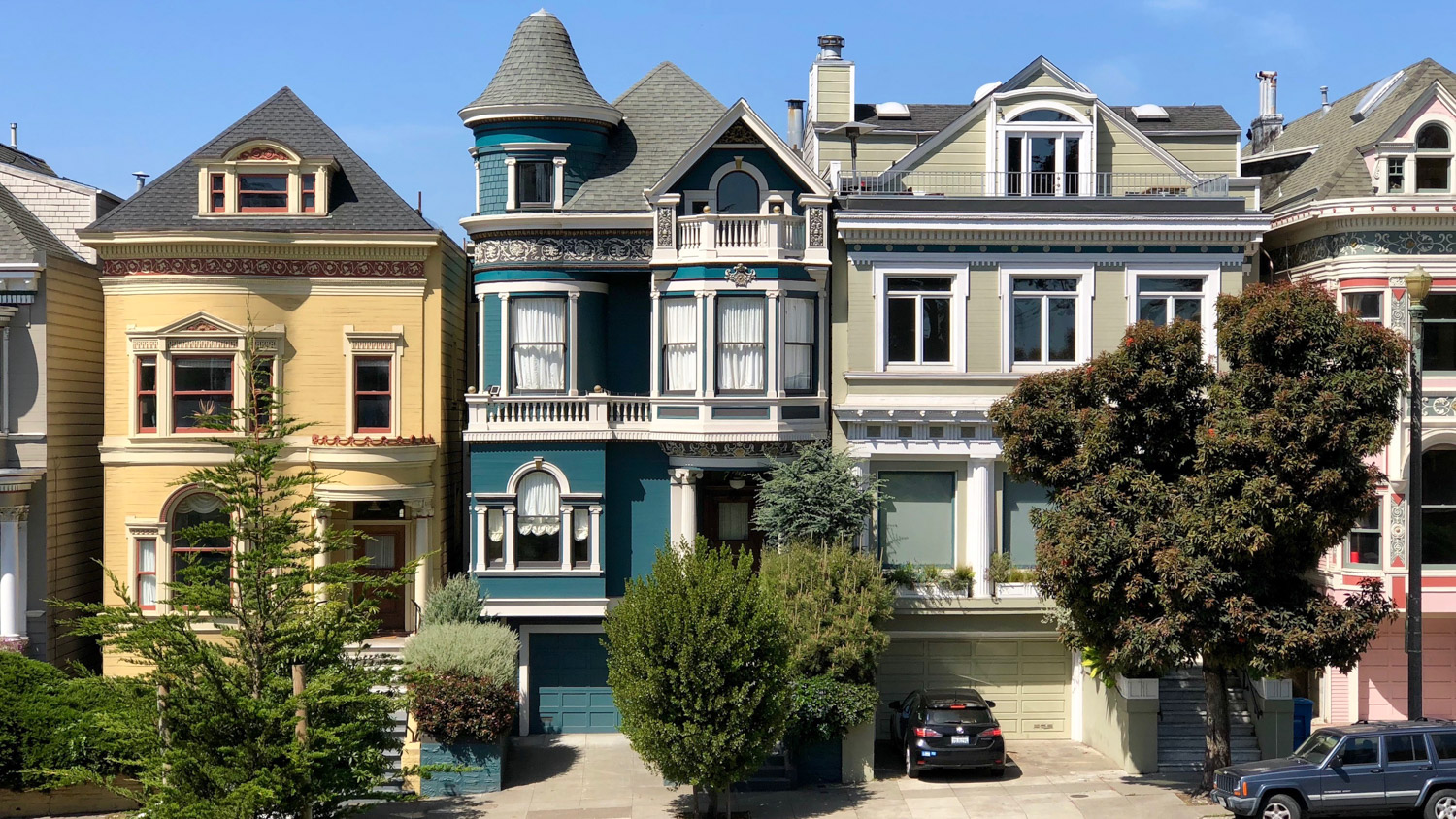 Post-shopping, we headed back to the hotel to freshen up before dinner at Liholiho Yacht Club. The restaurant came highly recommended by Victoria and given that I trust her with pretty much any recommendation ever (and she went to culinary school and knows SF inside and out), it was a no-brainer. More below but it was so insanely good! After dinner, we grabbed a drink at Benjamin Cooper before turning in for an early night. We woke up really early the next morning, had a delicious breakfast at Cafe Réveille before I had a quick meeting with Victoria at her gorgeous studio + apartment…I’ve mentioned this in the past, but I work with her in a sort of internship/mentorship capacity and it was so nice going from working over the phone and on Slack to in-person! We had a flight to catch after that and took an easy Uber to the airport–kind of sad to lose your entire day to travel, but way better than a red eye :)

Souvla: Many people recommended Souvla so I made it a point to get it on our list. It’s basically a fresh, pretty, fast casual Mediterranean spot with a limited but delicious menu. We split a chicken salad, fries with “granch,” and the frozen yogurt with baklava. The salads are enormous and I loved sharing so we could try everything…I seriously wish this place would come to DC. It’s probably the best non-full-fledged restaurant meals I’ve ever had, and would do so well here. Souvla, if you’re listening… 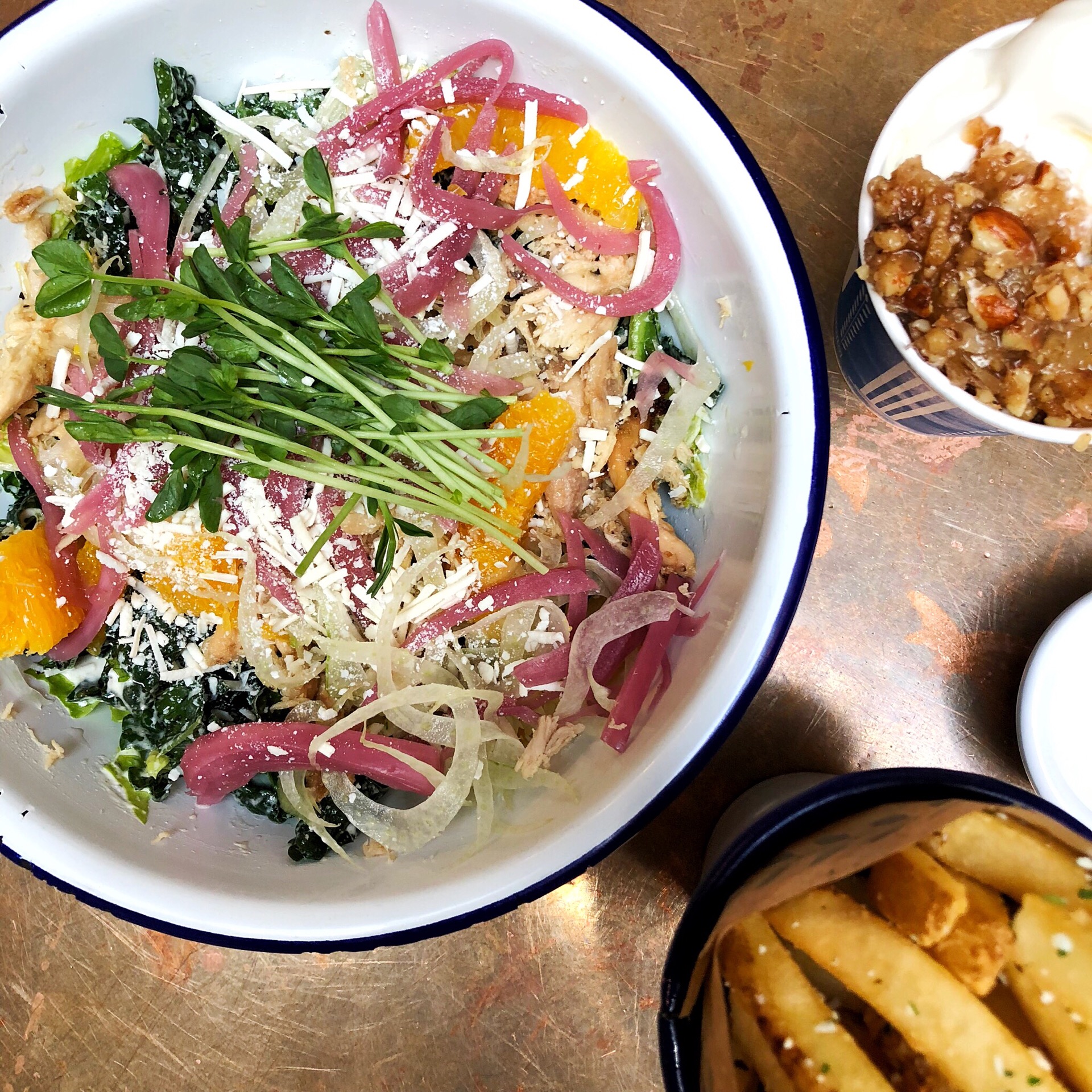 Cityscape at the Hilton Union Square: Victoria recommended Cityscape for the sweeping city views and let me tell you, the SF sunset from 46 floors up is pretty spectacular. Go before or after dinner if you can…the food menu is really limited. We’d gone to Souvla late in the afternoon so weren’t hungry for dinner, but ended up getting a couple rolls at a random sushi restaurant across the Hilton after drinks. 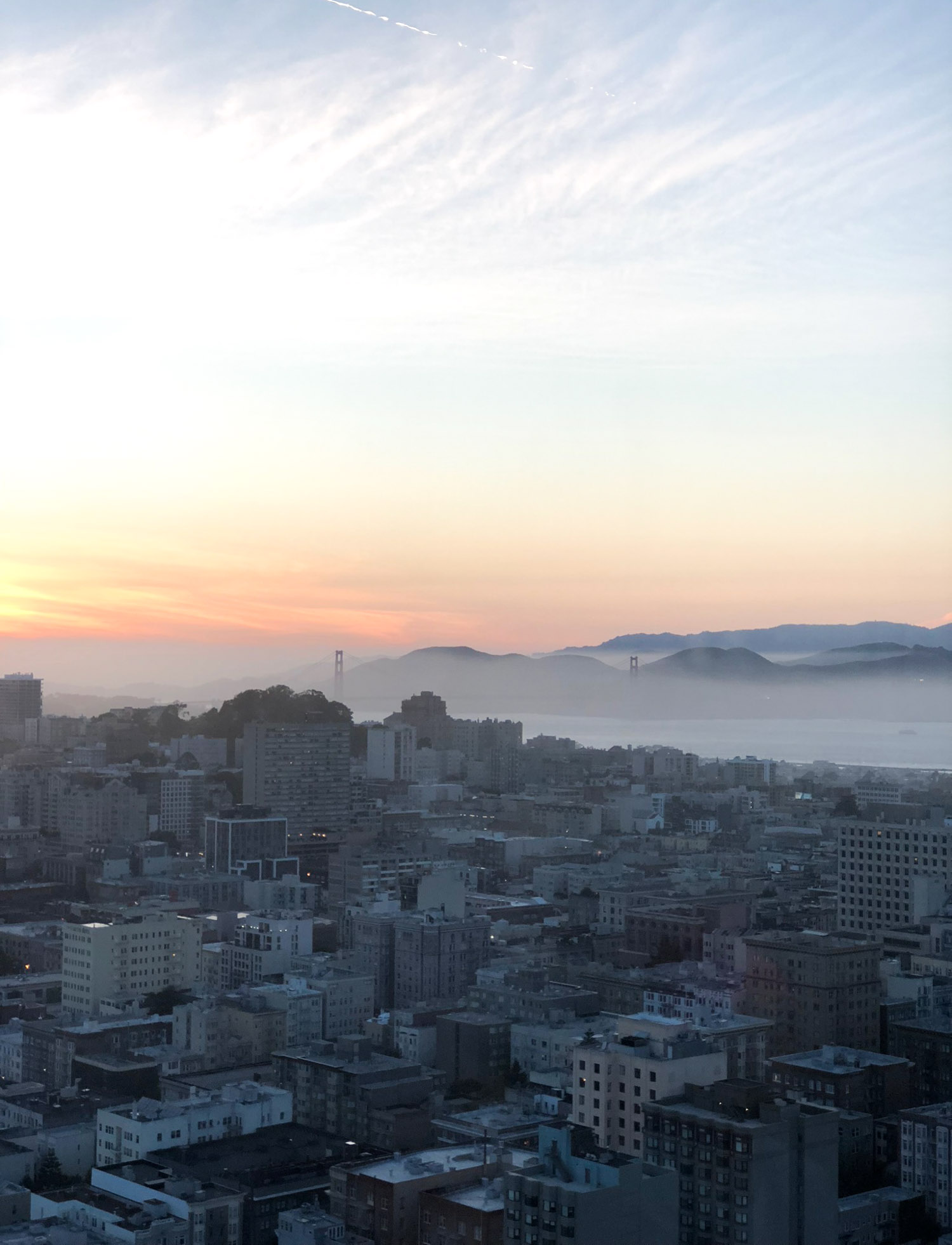 Little Gem: This is a cute little spot in the Hayes neighborhood. Everything is delicious-healthy sounding; I got the chicken broth soup (it had chunks of pulled chicken, scallions, mushrooms, and lots of broth) + housemade kombucha because lunch was 2.5 hours after I indulged in a cookie cake craving on Pier 39 at 9:30am. Next time I’d totally get the bibimbap if I were more hungry–Emilee got it and I had a little food envy!

Lhioliho Yacht Club: If you’re in SF and are looking for an incredible dinner, go to Liholiho–it’s truly one of the best meals we’ve ever had. We shared the beef tongue buns, shrimp fried rice, clams in coconut curry, and the Baked Hawaii for dessert. Keep in mind this place is popular–it was a short walk from our hotel and we got there at 5:04 (four minutes after they opened) and got the last two seats at the bar. The wait would have been 1.5 hours for a table (at 5pm! on a Monday!) so either snag a reservation, be prepared to wait, get in line before they open, or cross your fingers for the bar! Seems unnecessarily complicated when there are so many great restaurants in the city, but it’s well worth the legwork to have one of the most unique dining experiences. Sometimes I have trouble envisioning what some of these complex combinations of food will taste like, but Liholiho is one of those paces where you just have to ask for recommendations, get outside your comfort zone, and try a range of items from the menu because you’ll be blown away by something you didn’t know even existed! 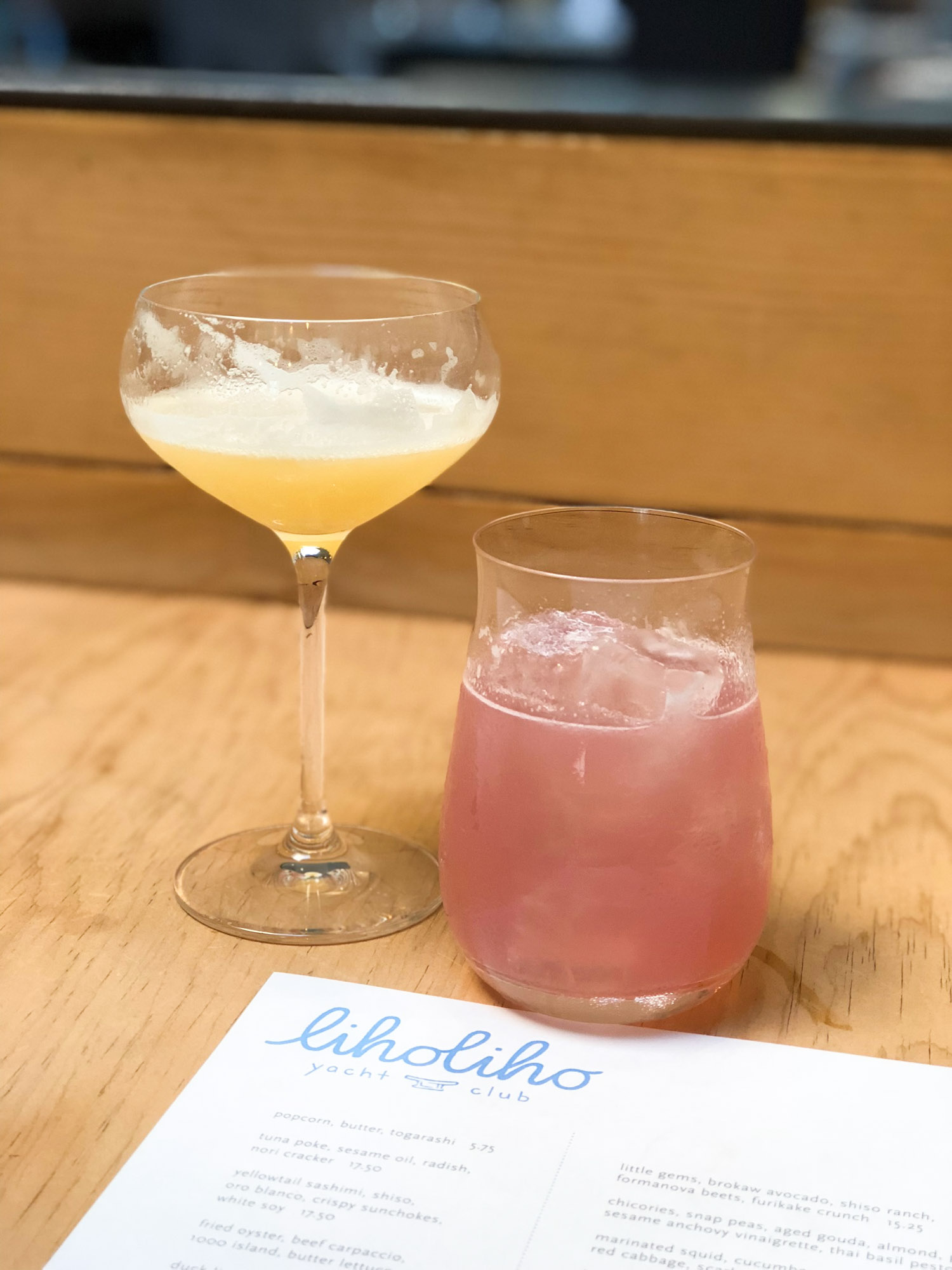 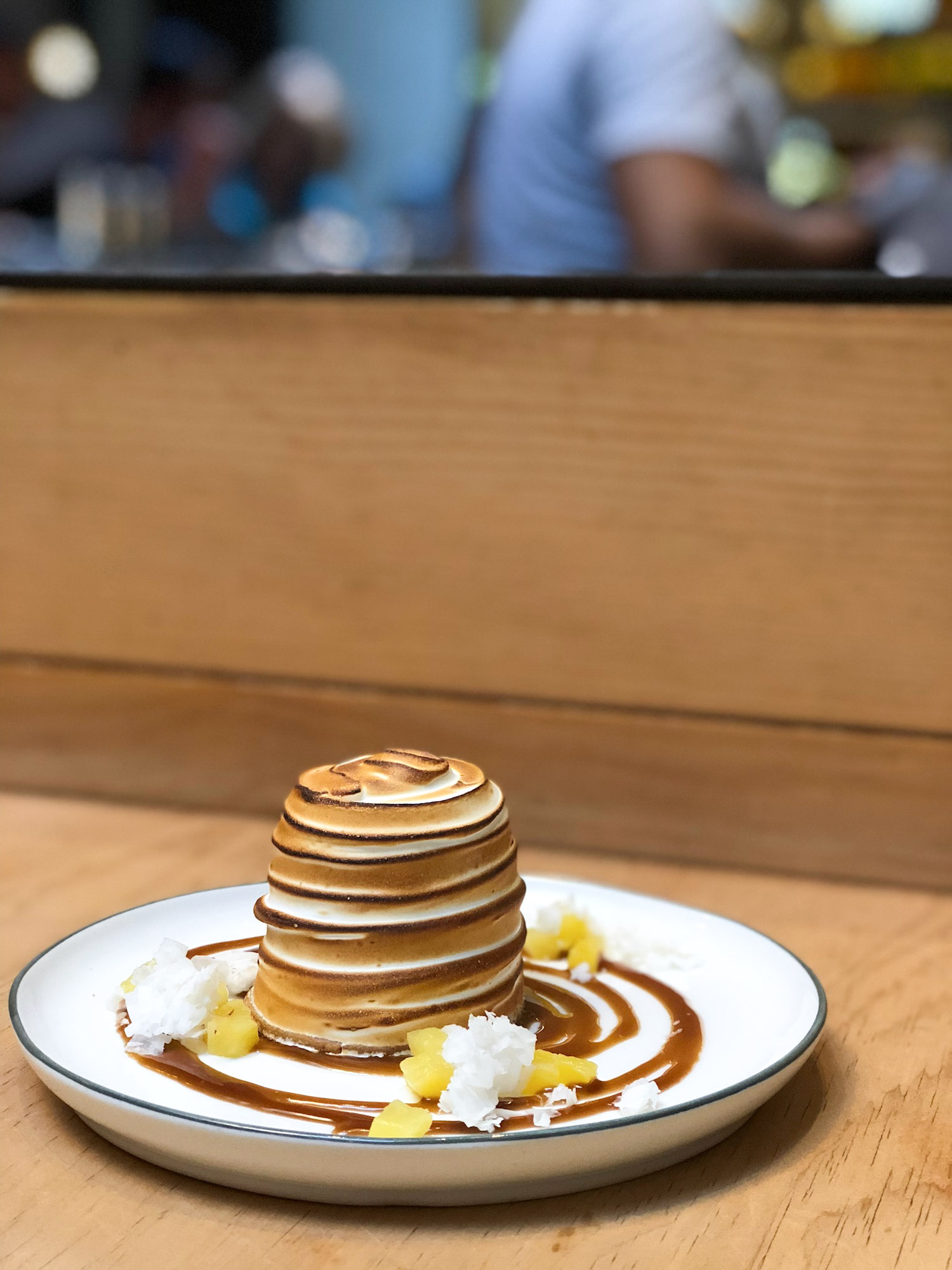 Benjamin Cooper: Condé Nast Traveler had conveniently sent out a guide to 20 bars in SF literally hours before we landed at SFO. Benjamin Cooper was this cool little speakeasy literally next door to our hotel and was a great “local” spot to grab a drink after our early dinner. I had the bartender come up with something gin-based and he definitely got creative, in a good way!

Cafe Réveille: Another local recommendation that did not disappoint! I seriously wanted nearly everything on the menu, but settled for the mushroom hash and J got the smoked salmon plate. We went to the Mission Bay location and they have the cutest bar–much like the other places we visited during our visit, I’m ready to go back! 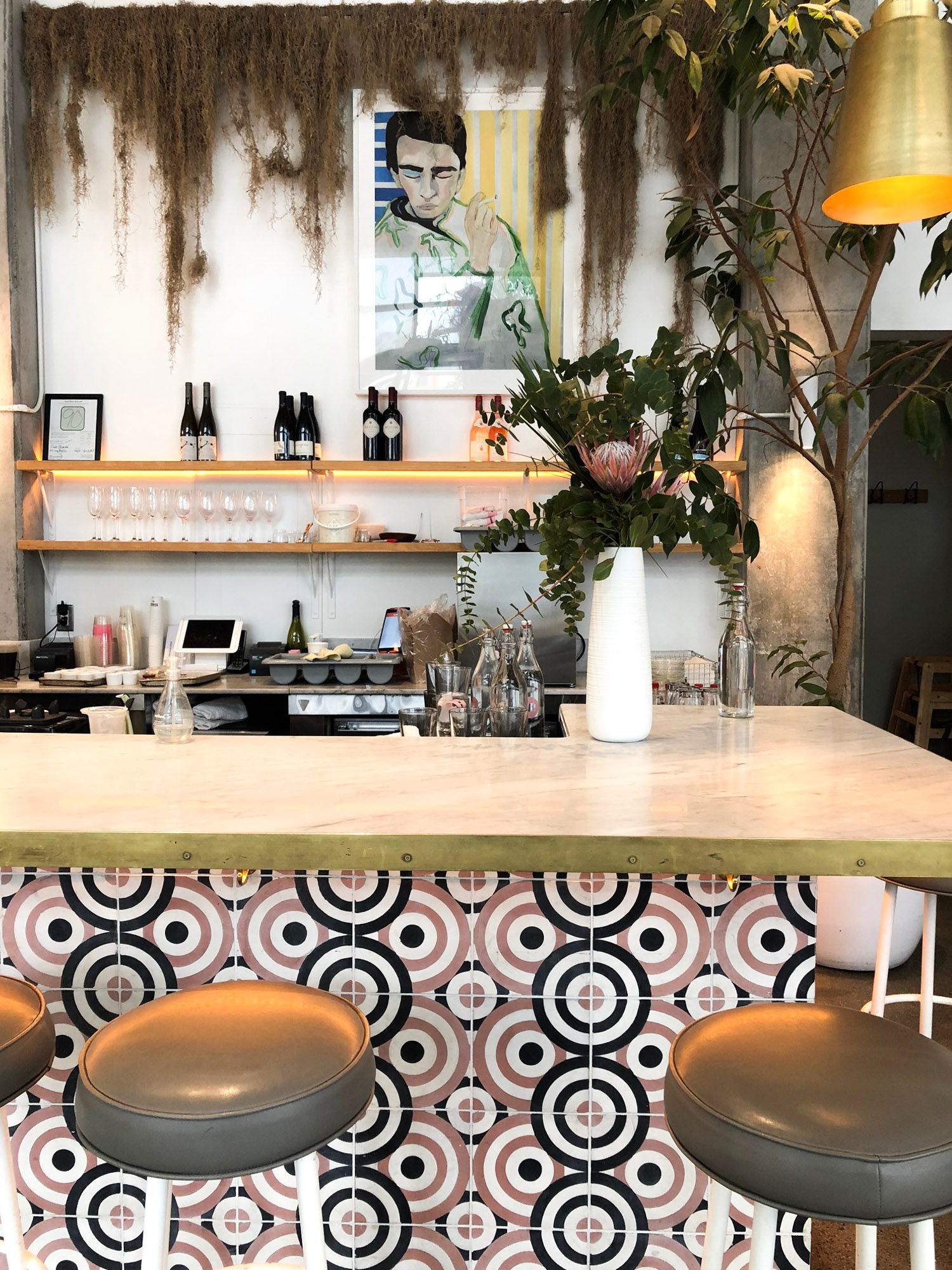