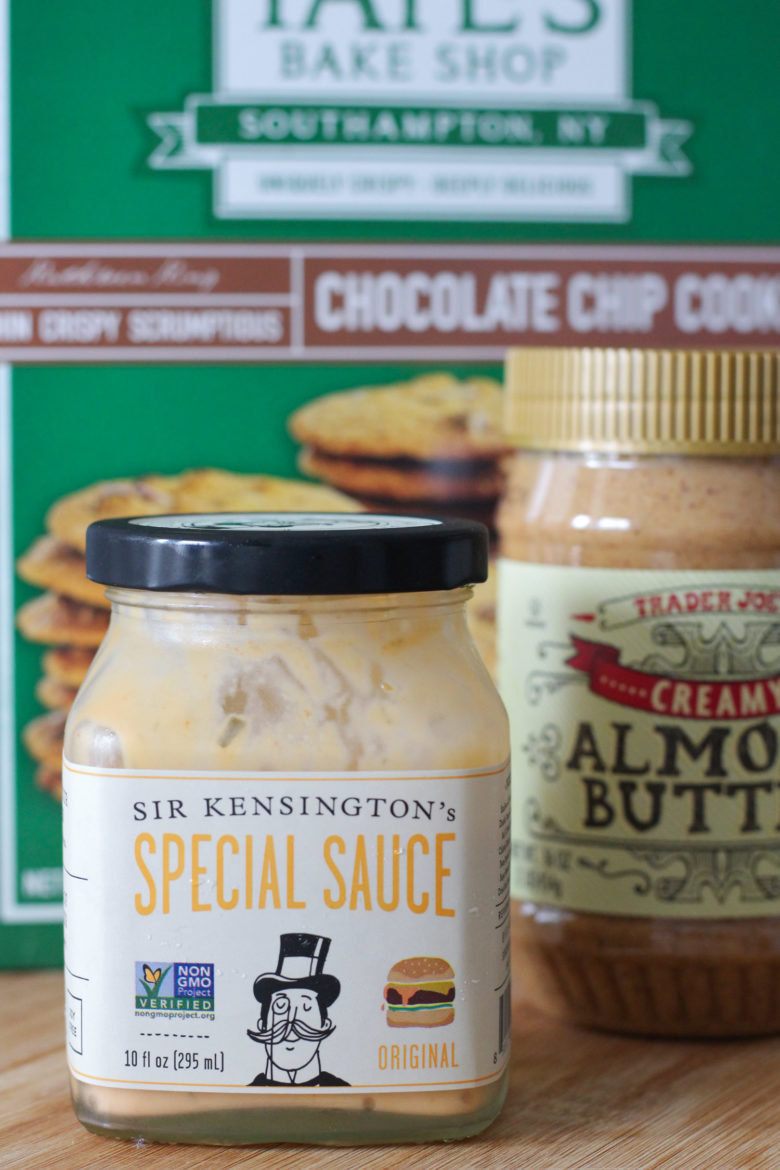 Much like “day in the life” and “what’s in my bag?” posts, I love reading about what people buy at the grocery store or stock in their fridge or pantry. I’ve highlighted a bunch of my favorite Trader Joe’s finds in the past, and since that’s where we do 90%+ of our grocery shopping, those posts are a pretty good peek at what you’d find in our kitchen on a given day.

However, despite my insistence that we almost exclusively do our shopping at TJ’s—it took J awhile to warm up to the non-branded items so there used to be a little more Safeway sprinkled in there—there are a few things I will happily splurge on. These probably aren’t considered splurge items to many people, but I take a lot of pride in making sure our weekly groceries ring in between $45-70 and picking up a couple of these can  easily throw that figure out the window. Luckily most of them last a little while and let’s be honest–even if their prices skyrocketed, I’d probably still buy them!

SIR KENSINGTON’S SPECIAL SAUCE: This stuff is like the gold standard of condiments…all of Sir Kensington’s products are so good! The special sauce pairs well with seemingly everything—we most frequently eat it with veggie burgers and turkey burgers. Sir Kensington’s other condiments are also delish…while they aren’t ones I’d regularly indulge in for my own fridge, I always enjoy when nicer restaurants and bars serve them alongside their food.

TATE’S COOKIES: If you haven’t tried Tate’s chocolate chip cookies, get yourself to the store ASAP. I’m the girl whose screenname was cookiesnmilk2009 for years and I literally ate two cookies with a cup of milk nearly every night growing up. I therefore consider myself a cookie connoisseur of sorts, and Tate’s are hands down the BEST—perfectly crispy, the right amount of butter, the best kind of chocolate…they are indescribably good. If you’ve had them, you know exactly what I’m talking about.

We got lucky the other day and snagged a huge box of the chocolate chip variety at Costco for under $10; typically they’re between $4-6 for a small package. They’re definitely pricey but I’ve seen them on sale at Whole Foods, surprisingly fairly often. I’d say to go for the real thing whenever possible, but per this post, TJ’s makes a pretty good knockoff!

ALMOND BUTTER: We are both huge peanut butter fans but in an effort to find a healthier alternative to use selectively, (Read: nothing will fully ever replace PB for me), decided to try almond butter. Again, I’m sometimes unreasonably meticulous when it comes to deal hunting—we rarely buy PB that’s not on sale for $2—which made the TJ’s $5.99 almond butter price a hard one to swallow. We finished our first jar and I just bought a second over the weekend…it may not make the cut for a PB&J, but it sure does taste good on waffles and toast with honey!

CASHEWS: I’m sure a lot of people buy a variety of nuts regularly but they are pricey! We both love cashews but J snacks in bulk and will go through a bag within three days if he could. We therefore aim to and limit our cashew buying to every other week, max. They’re definitely more affordable at TJ’s compared to other retailers, but I’d consider them one of my splurge items nonetheless. I’ve found that they really elevate simple dishes…I especially love mixing them in with TJ’s Asian frozen meals.

BONNE MAMAN JAM: Hands down the best jam ever. I’m partial to the mixed berry but they’re all wonderful. They do go on sale sometimes but are a worthwhile indulgence regardless–they’re something I’d treat myself to even as a minimally-paid intern immediately post-graduation, which is saying something. I especially love pairing it with a warm croissant and pretending my breakfast bar is a Parisian cafe.

These are my five big ones–not included is the occasional overpriced block of cheese :) Are there any splurge items you indulge in on the reg? Leave them in the comments below!