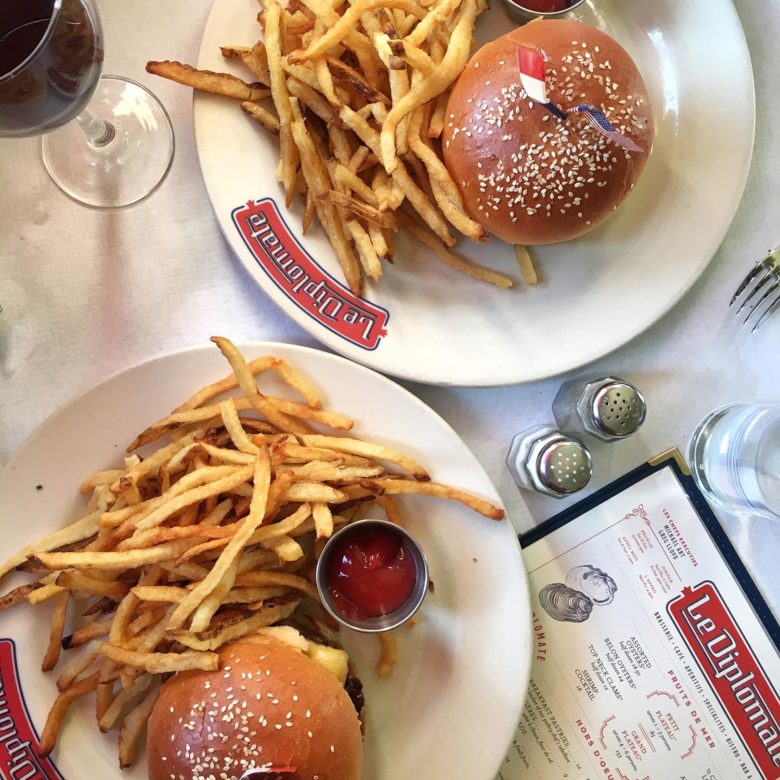 This post is pretty overdue because most of my friends know how much of a burger connoisseur I’ve become over the past few years. I probably eat one almost weekly and generally can’t resist ordering one if they’re at all unique or if the establishment is acclaimed for theirs. I’ve done a little roundup of my top five best burgers in DC on Insta Stories before, but it’s about high time I put it into writing–that is, of course, till I try a new place that earns a spot! (I’m looking at you, Bourbon.)

Hands down the best burger I’ve ever had…ever! (It’s unsurprisingly on my list of best dishes in the city.) Many DC residents will surely agree with me on this. There are two thin beef patties, a delicious sauce that’s better than any other “special sauce,” and the yummiest bun–I’ve actually had multiple conversations with people about just what makes the Le Dip burger so memorable, and the closest conclusion we’ve come to is the ideal ratio of ingredients. The proportions are perfect and as is the case with everything at the restaurant, all the ingredients are so fresh and good on their own, that it’s no surprise that they make up the dreamiest Burger Américan. The fries are also out of this world–and that solidifies the No. 1 spot.

If you’re feeling ambitious, you can try making your own at home but if not, be warned that once you start ordering this (at a restaurant where literally everything on the menu is fantastic, at that), you probably won’t choose anything else :)

P.S. Every time I’ve asked a server what they recommend, they’ve always said the burger. Pretty interesting for a French restaurant!

Ah, the Mintwood burger. I raved about this thing for years–a deliciously large, juicy bacon cheeseburger. Much like Le Dip, Mintwood is an upscale French restaurant that happens to dominate in the hamburger department. I first had it about 2.5 years ago and it’s rivaled the Burger Américan ever since. I almost dropped it to the third spot because last time I ordered it, it was so overcooked. I usually order my burgers cooked “medium” which definitely leaves room for overdoing things…it usually doesn’t bother me if it happens once, but excitement was sooo high after the first experience that I left disappointed. However, aside from the lack of pink, it was still delectable (and available on happy hour, though that’s where I got the overcooked one so maybe don’t be shy about sending it back if that happens to you) and so worthy of the No. 2 spot.

When the Salt Line opened last summer, Washingtonian questioned whether their burger usurped Le Dip’s–a bold claim, clearly! I therefore went in with ridiculously high expectations, meaning Salt Line didn’t stand much of a chance. The burger is fantastic albeit a little bit small, particularly for the price. The patties are thin and well-seasoned and while I don’t even really love pickles, these are so good (and somehow tie everything together in a standout way, which is why I’m convinced this burger is so good). Now that I’ve been to the restaurant a few times, I’d safely say that it’s my go-to unless I’m seriously craving seafood. It’s not as consistent as Le Dip, but nothing is! It’s also called the New England Smashburger, which earns it an extra point.

It feels kind of ridiculous to put two chains on this list but they’ve earned their spot! Taylor came out with their burger as a limited edition menu item last year and I was blown away at how good it was. They currently only have it after 4pm on weekdays and all day on the weekends, which is kind of weird but based on how long I’ve had to wait for it to be made, probably makes sense given that their lunch rush is usually so packed. I really can’t put a finger on why these are so good…I think it’s because of the bun, grilled onions, and how the cheese melts over the two thin patties. Also, my tweet to Laura (who is equally a fan/is a fellow burger aficionado) is featured in this article–#truefans.

In the grand debate of Shake Shack vs. In-N-Out, I’m firmly on team In-N-Out. Sadly it doesn’t exist in the DMV, but I’ll happily settle for Shake Shack! The burgers are consistently good–their Shack Sauce is one of the best “special sauces,” in my opinion. Unlike with Salt Line’s burger, the small size doesn’t deter me…I actually like it (since it’s like, half the price), so I can indulge in an order of their cheesy fries and not leave in a food coma. Also, for vegetarians and beyond, the ‘Shroom Burger is phenomenal. Trust me! It takes a lot for J to pass up meat, but he’s actually ordered it himself before.

Clocking in at No. 5 of the best burgers in DC is The Smith’s Burger Supreme. While I typically prefer thinner patties, this one is really thick and complemented with a wonderful selection of unique ingredients among which are a short rib blend for the meat, raclette cheese, and a peppercorn sauce. The only reason it’s not higher on my list is that it’s been overcooked at least two of the three times I’ve ordered it, and the same has happened with others in my party. I wish that wasn’t an issue but it unfortunately seems to be kind of consistent. Hopefully it’s remedied next time and if it does, it’d move up a couple spots on this list! (Their fries are also awesome, if you were wondering.)

That’s my list of  best burgers in DC–if you live in the area or have visited and have a favorite burger (or two), I’d love to know what it is!

P.S. My favorite restaurants in DC, broken up by cuisine–it can be found under the “Travel” section of my blog!