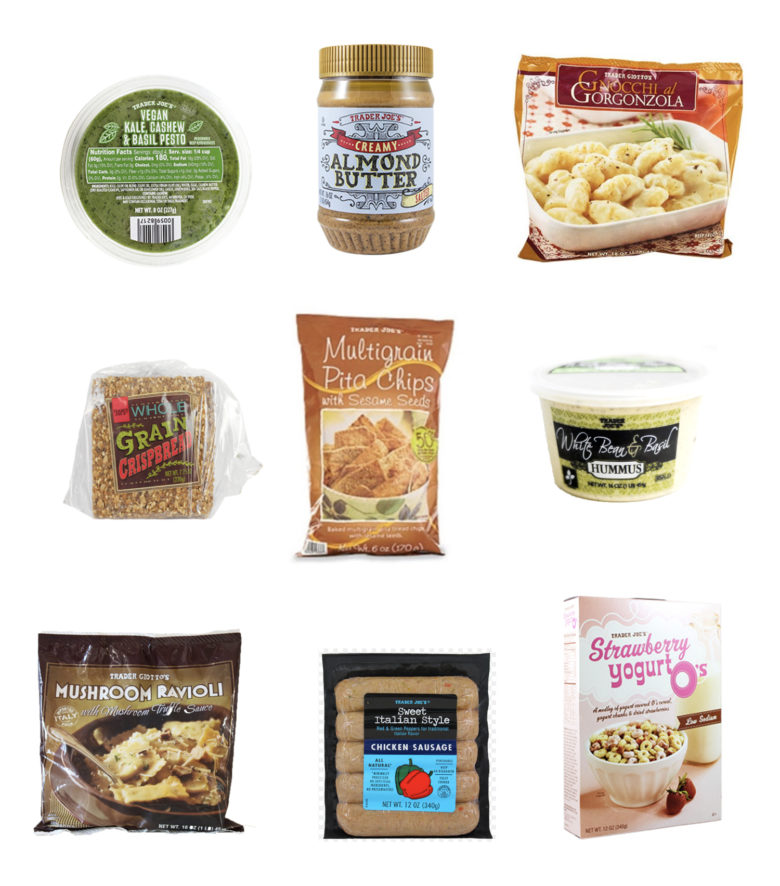 We are back in DC after a really fun wedding weekend in Dallas–losing Thursday made it feel like a really quick trip since I was so busy with bridesmaid festivities, but I’m so glad it all worked out during what seemed to be an awful travel week for people across the board!

I’m back with another installment of Trader Joe’s products favorites and have a feeling a similar, more summer-centric roundup will follow in the coming weeks. We’ve been trying a bunch of new things lately and they tend to add a lot of seasonal items, which we haven’t even dipped into yet this month. Here are nine best Trader Joe’s products we’ve bought lately/buy on the reg…

Vegan Kale, Cashew, and Basil Pesto: This is definitely an item I viewed as a little “extra” at first because I didn’t think pesto needed bells and whistles, but I bought it on a whim and hate to admit that it’s the only pesto we’ve bought since. It can be used in the exact same ways as the “regular” version; the only thing I noticed is that it’s a little less oily than the jarred variety, so you may want to add a little olive oil if you’re mixing it in with pasta. You’ll find it in the refrigerated section near the fresher pastas and cheese.

Almond butter: I mentioned almond butter in this post, where I talked about what foods we typically splurge on. We always buy it from TJs…to be honest, the only other one I’ve really tried is a sample of the new RX bar nut butter and while that was delicious, I’m happy with this one (both salted and unsalted). The price is good, too, as far as nut butter goes!

Gnocchi al Gorgonzola: Frozen pasta round two! For some reason, I’d kept skipping over the Gnocchi al Gorgonzola until Katie recommended it the other week. It’s as close to restaurant-quality as frozen pasta can be! I do wish it was a bit more flavorful, but you can easily add a little black pepper or fresh parm to round things out.

Whole Grain Crispbread: We’ve been adding this Nordic cracker to our car the past few weeks and will probably do so for the foreseeable future! It’s the perfect vehicle for pretty much anything: peanut or almond butter (with honey, sometimes!), Nutella or another sweet spread, avocado, turkey/cheese, and more. Think of it as a very thick, grainy cracker. Its not my favorite plain but is the best snack once you add a little something.

Multigrain Pita Chips with Sesame Seeds: A multigrain version of a classic pita chip–if you like sesame seeds, definitely pick this up. My only complaint is the bag is kind of small but it’s not a bad deal if you’re trying to exercise some portion control (vs shop for a large group).

White Bean and Basil Hummus: A year or two ago, I discovered that I likely have a mild chickpea allergy–a huge bummer because I love them and anything made with them–so unsurprisingly, I’ve significantly cut down on my consumption of this particular legume. The reaction isn’t severe (just a dry/itchy throat) but it’s enough to nip any craving in the bud. Hummus, however, is one thing I really miss. I’ll eat it in small portions but was delighted to spot TJ’s White Bean Hummus…it’s so, so good! It’s nearly identical texture-wise (maybe a little softer/creamier) and is incredibly flavorful. Highly recommend in any circumstance where you’d normally buy the chickpea-based variety! We’ve been eating it with the aforementioned multigrain pita chips.

Mushroom Ravioli with Mushroom Truffle Sauce: A huge win in the frozen pasta department! It’s on the rich side so if you serve it with an app and/or bread, you should have a generous two-serving portion. We’ve been keeping one or two bags of pasta on hand for an easy weeknight meal.

Chicken sausage: We usually have a package of chicken sausage in our fridge because it’s such an easy thing to whip up–we’ll have it with grain bowls, with breakfast, in pasta, etc. and J eats it plain with mustard sometimes! There are a bunch of different flavors and we don’t even have a favorite…we’ll just pick up a random one depending on how we’re feeling that day.

Strawberry Yogurt O’s: I actually haven’t had these in awhile but used to buy them pretty frequently in my first couple years post-college. If you like a sweet cereal that isn’t overly sugary (or eating cereal for dessert), it’s perfect. The ratio of “strawberry o’s” to “plain o’s” is ideal, and it’s my favorite cereal they sell!