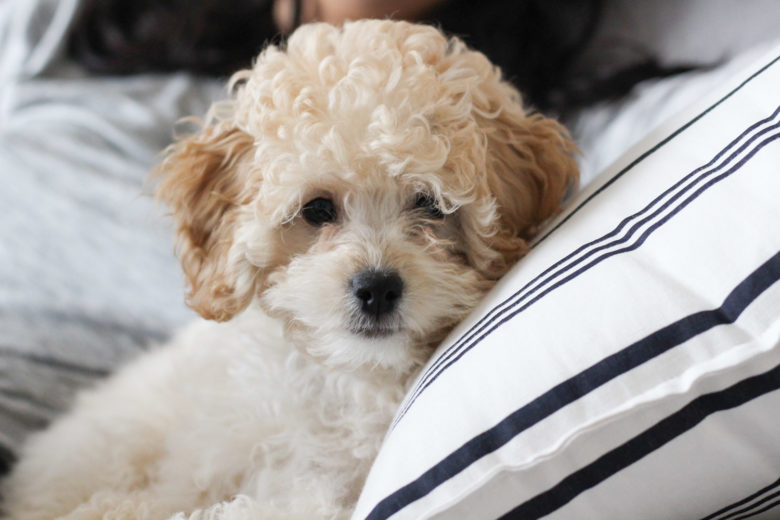 Meet little Millie! She’s a toy Cockapoo and we’ve had her for just over a month. She’s currently 13.5 weeks old and weighs six pounds! After years of [unrealistically] begging J for a pup, it still feels surreal that we’re dog parents!

The question we probably get asked the most in regards to her breed is why we chose a Cockapoo. In short, J and I both thought we were allergic to dogs and therefore were looking for a hypoallergnic breed. I ended up getting allergy tested a few weeks ago for a different reason, and turns out I’m just really allergic to trees and not dogs–which explains a lot, because I have really bad symptoms around some dogs and zero around others.

Personally, I really wanted something under 20lbs because a) we live in 540 square feet in a high-rise in the middle of DC and b) then we’d have the option to fly with the pup if we chose to–key since neither of our families are within driving distance. We literally had years of half-joking conversations re: what breed of dog we’d ideally end up with…J grew up with three Newfoundlands–at the same time–and I grew up with one Yorkie. He was happy to meet in the middle weight-wise, I wasn’t (like HAHA, the average here did not honor my preference one bit), and after researching some smaller breeds and coming to terms with our limited real estate footprint, he gave in. Don’t worry, I promised a big dog once we have a house and a yard! 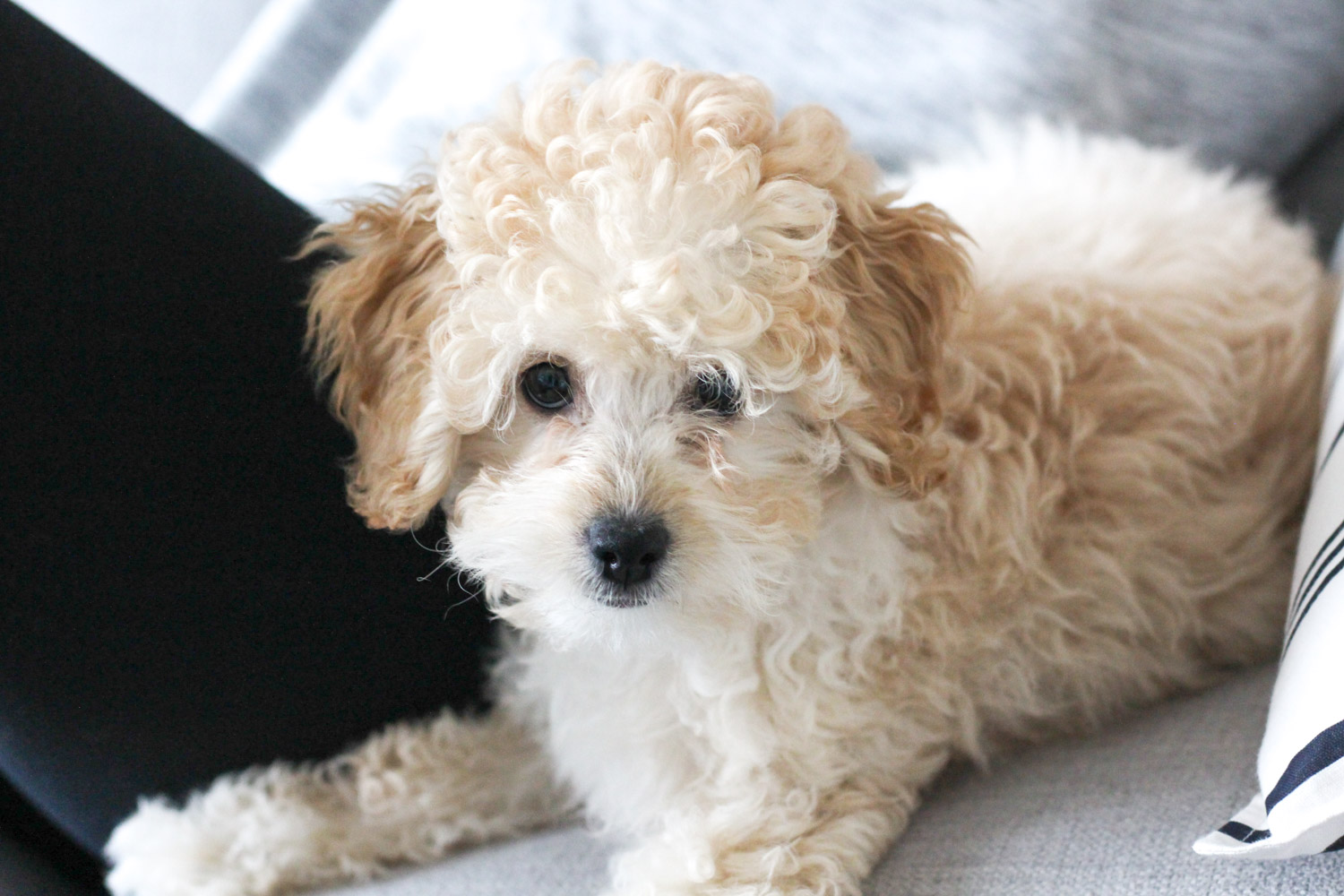 After all this, we’d pretty much narrowed it down to Mini Goldendoodles, Mini Cockapoos, West Highland Terriers (Westies), and Havanese. I’d been enamored with Sheepadoodles for a few years after literally stopping a woman on the street to ask where she got her pup. We sadly ruled them out this time since we wanted to be within driving distance of the breeder. In general, poodle mixes were especially appealing since they’re both hypoallergenic and known for their smarts, making them easier to train than some other breeds (our family Yorkie was a pain in the butt in this department!). I basically had a spreadsheet for each breed and would drop in breeders’ names + contact information. Some responded promptly, a couple had really intense processes that were a huge turnoff–like a $500 deposit on a $3500 dog and you didn’t even know when you’d get the pup–and some flat out didn’t respond. I literally called our breeder one day during lunch (when I was going line by line on the spreadsheet), she answered, and we had a wonderful 20 minute conversation. I immediately gchatted J that we needed to get a Cockapoo from her. We happened to be driving back from The Greenbrier a few days later and were able to stop by her place and meet her mom pups…that sealed the deal! It was really important to me to find an open and ethical breeder whose puppies also didn’t cost an arm and a leg. I truthfully think we’d have been happy with any of the aforementioned breeds, but I loved that Cockapoos are a little less common and have those perfect Cocker Spaniel ears combined with a Poodle’s intelligence :) 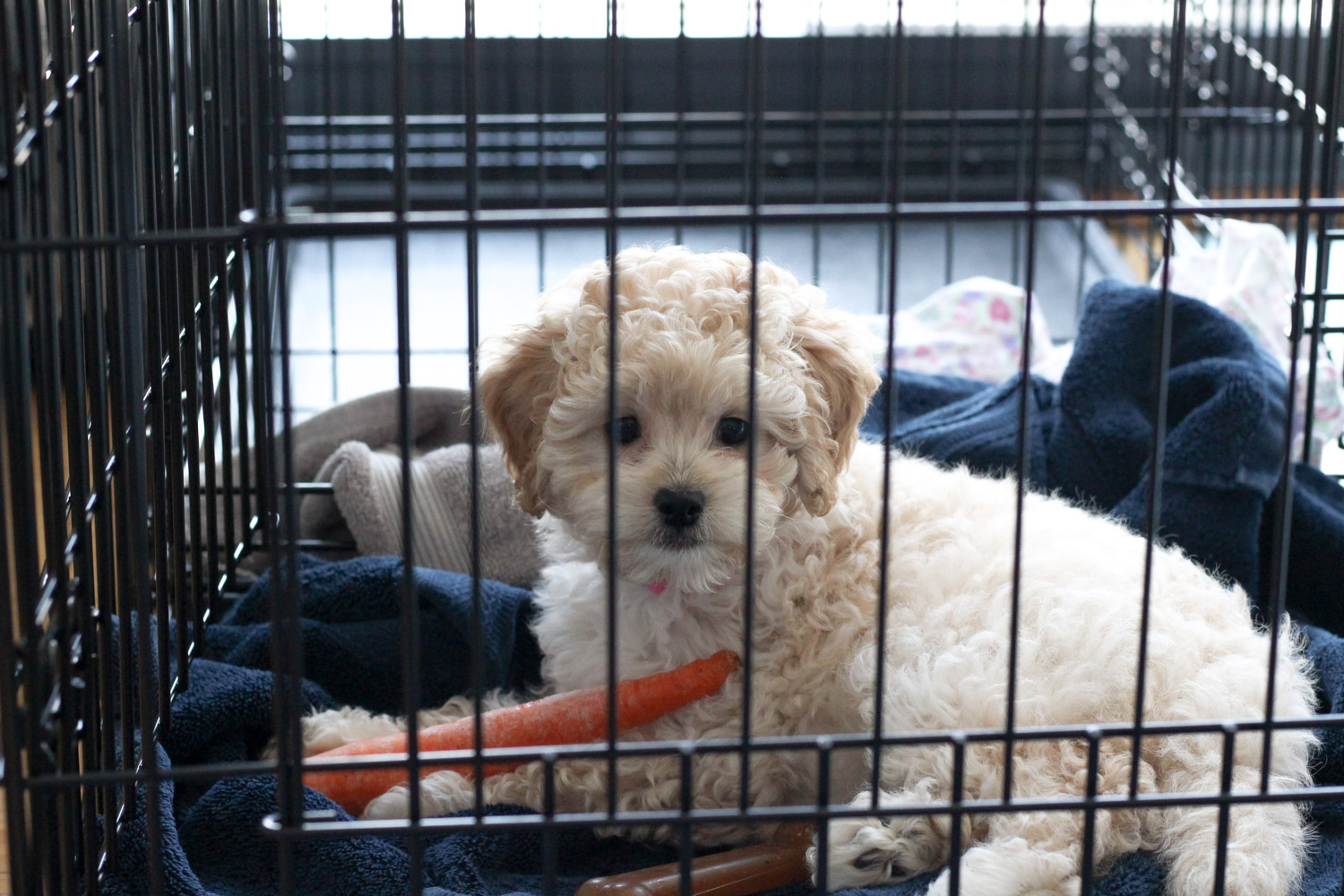 She looks so small here with her carrot! This was on May 15. 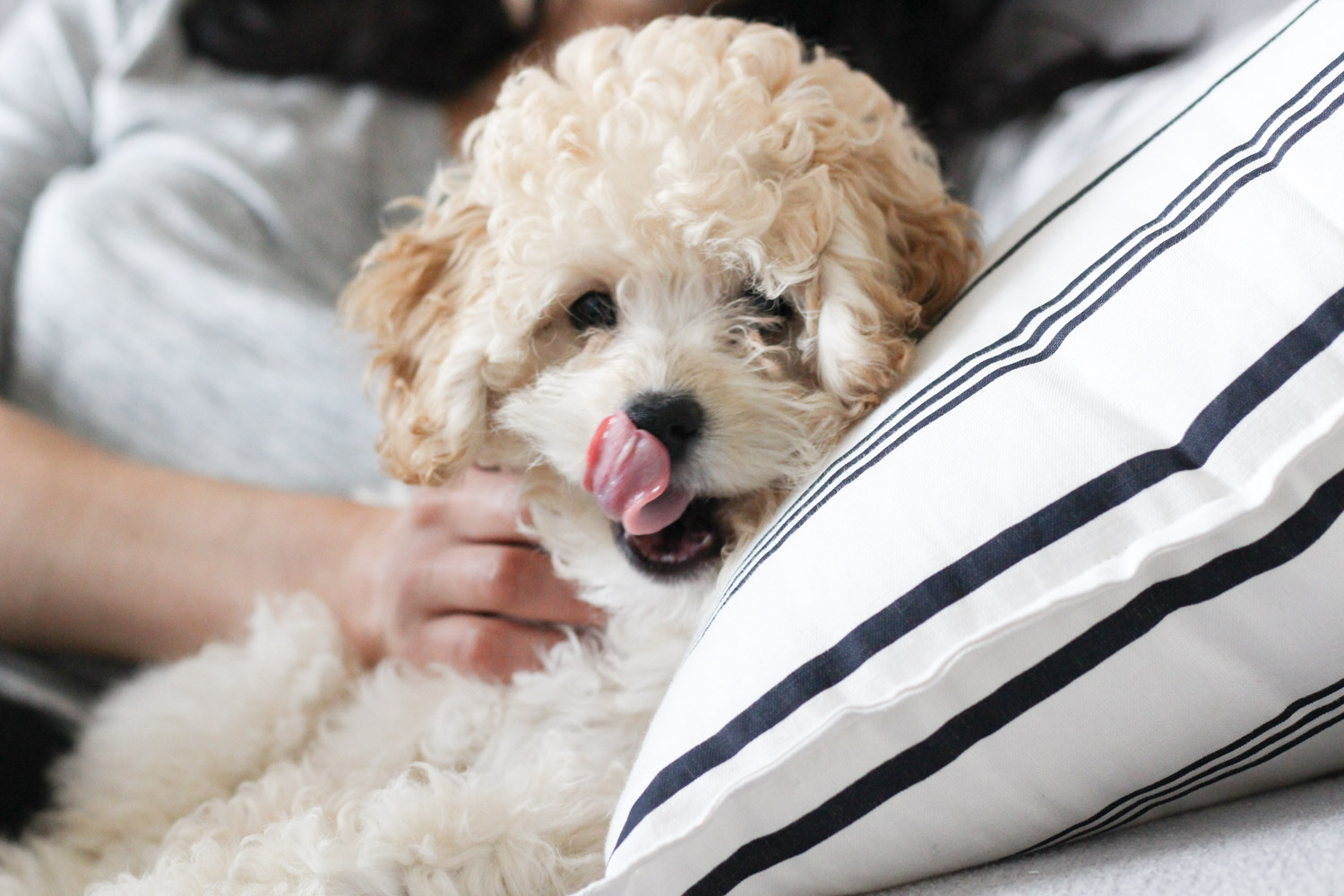 This was taken on Monday night–squeal.

We actually went into the breeder’s place assuming we’d be getting a pup from one mom’s litter, but J ended up really connecting with another one–who happened to be a “toy” Cockapoo, so when full grown, her dogs would be smaller than we were initially looking for. We went back and forth over whether to go with a smaller dog or a larger one (the pup from the initial litter would have been about 18-22lbs, vs. Millie will most likely be 10-12lbs) or whether to prioritize the “connection.” As you can see, we went with the toy and ended up with little Mildred. Obviously we’re thrilled with the decision and based on how he acts with her, you’d never think J was partial to anything else!

As everyone who has a dog knows, timing is never perfect. Is there ever really a time when everyone isn’t “busy”? We were initially thinking fall, but once we met the breeder and found out when the mom was going to be pregnant, we embraced the earlier timeline. We’re fortunate to both be in jobs that are fairly flexible–I work from home two days a week–and weather-wise, this is the ideal time of year to train a clueless puppy. Luckily all this started evolving in January so we had a few months to plan; that’s why we front-loaded our vacation days! 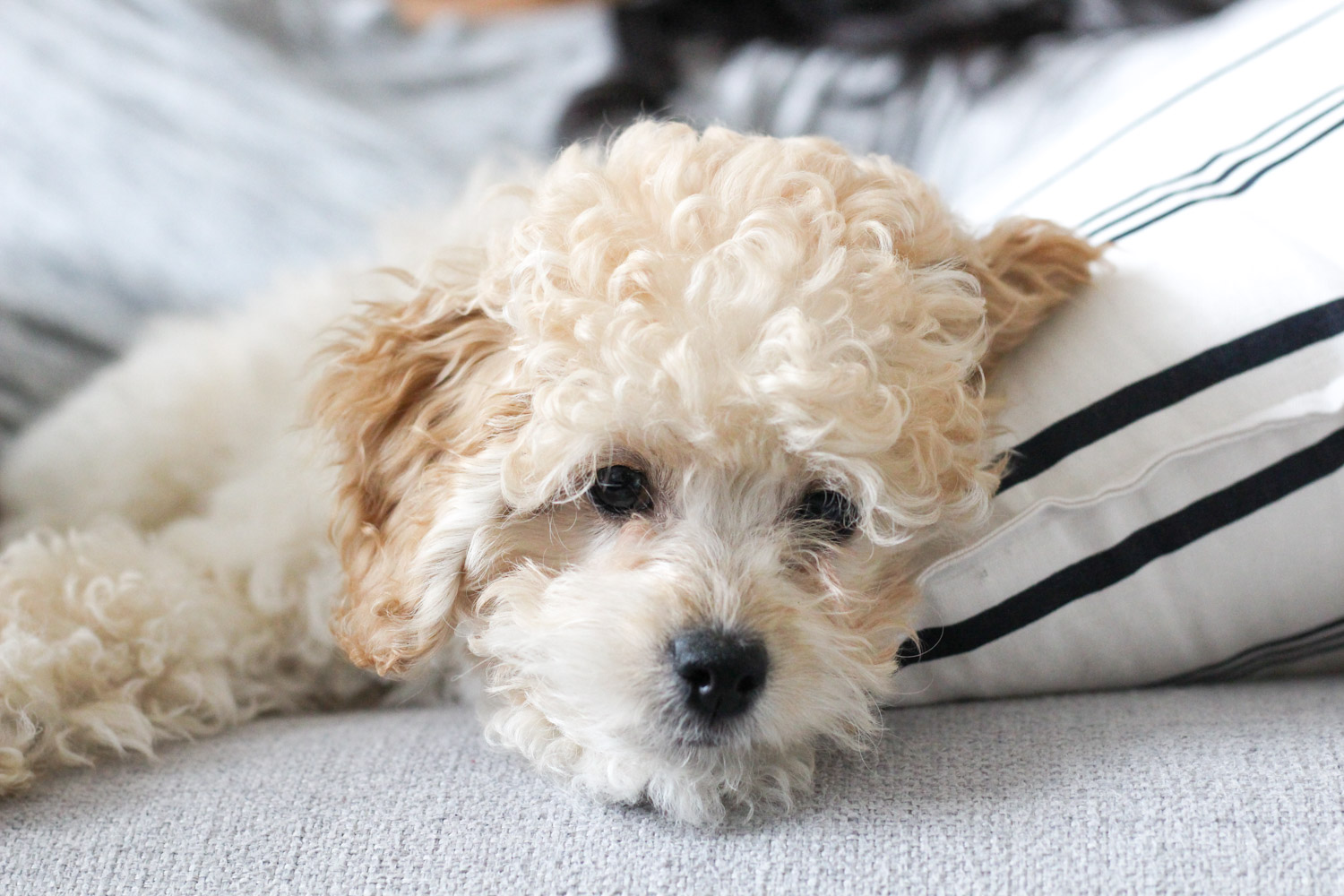 On a more serious note, a lot of people are firmly in the “Adopt Don’t Shop” camp, and I fully respect that. If we both weren’t allergic (or at least, this was the idea when we thought I was, too), we’d have more confidently gone that route. We also weren’t in a position both time wise and financially to support a pup with health or emotional challenges, so the combination of being limited breed-wise, size-wise, and care-wise prompted us to go to a breeder. If you’re looking for a Cockapoo breeder, I can’t recommend ours enough. She’s about two hours away from DC in the Shenandoah Valley, and was a joy to work with. Feel free to email me (monica@monicadutia.com) and I’ll pass along her information!

If you have any questions about the adoption story, I’m happy to chat…we did a lot of research! And I’m constantly posting about Millie on Insta stories, if dog videos are your thing!

P.S. When we got Millie!

P.S.S. What it’s like to move in with your significant other. 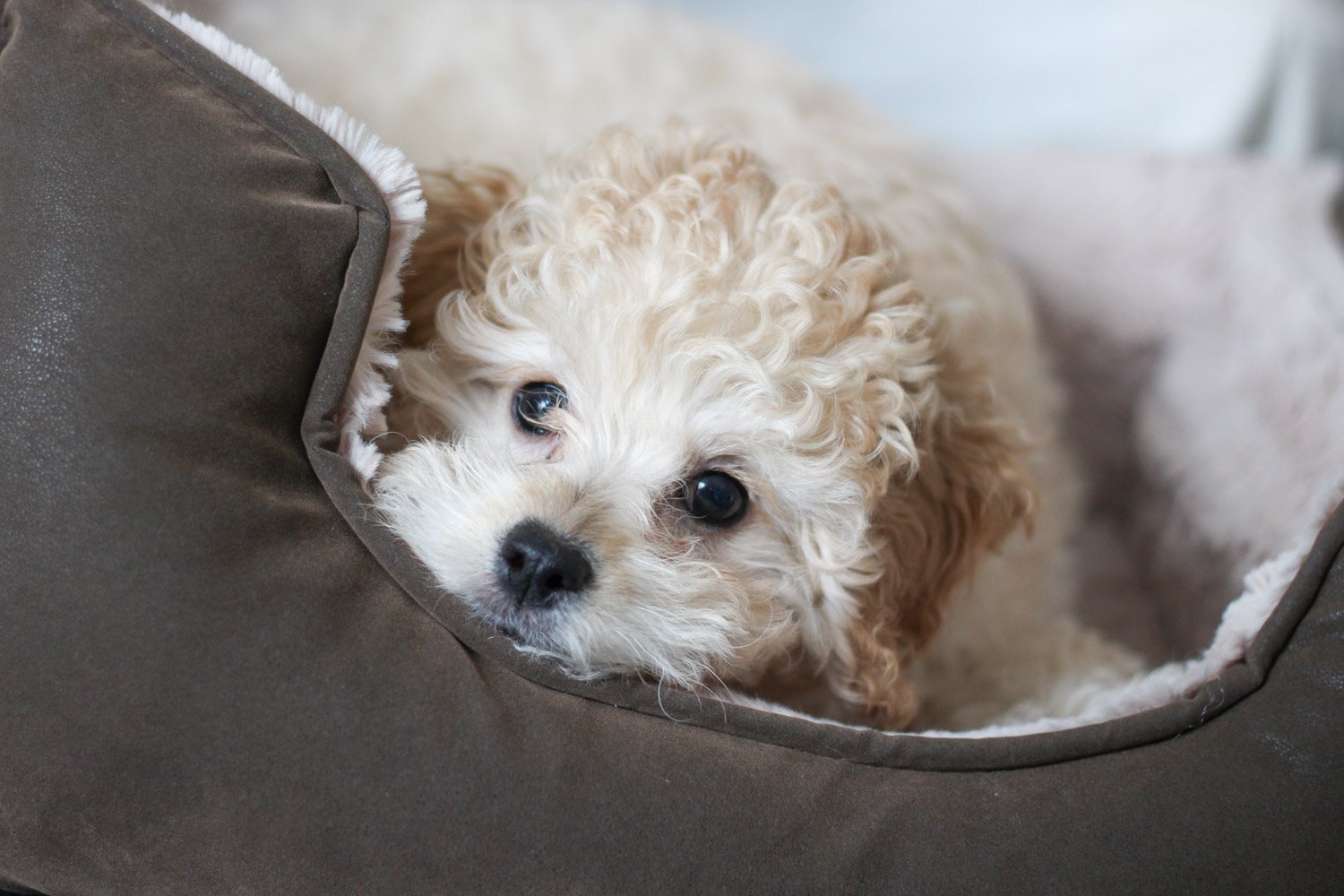