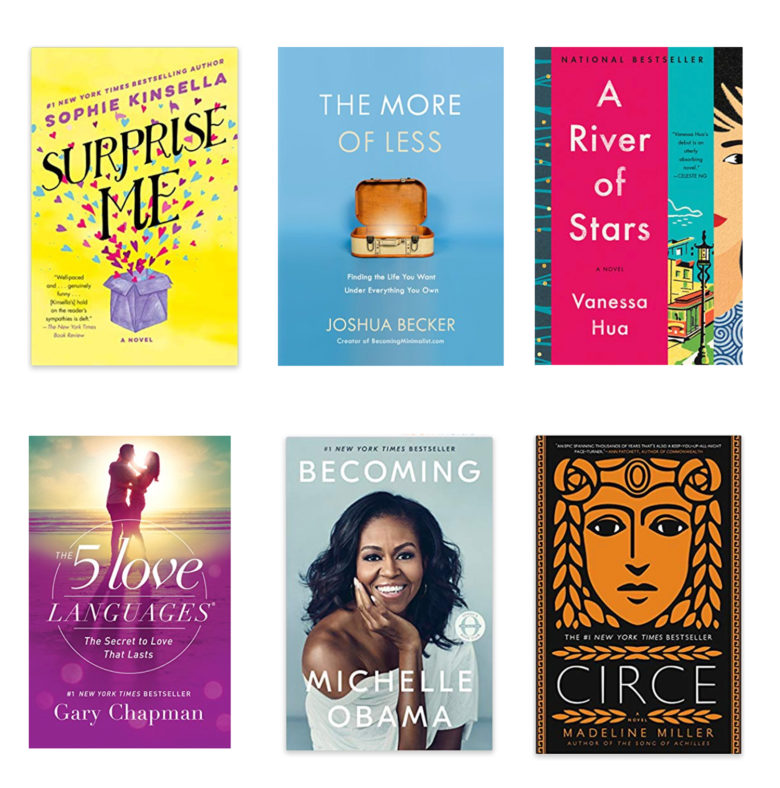 So…I lost count of how many books I’d read as of late and blew through my usual six or nine read roundup! I’m at 12 so am going to split this into two posts–the next one will be up in a week or two!

Surprise Me by Sophie Kinsella

I always have a soft spot for Sophie Kinsella’s books and will read anything she writes! I wouldn’t necessarily say Surprise Me was one of my favorites, but it’s a cute, light read. (I usually blow through her novels and this one took more than a few days!) Sylvie and Dan have been solidly married for over a decade and basically panic at the thought of spending literally the rest of their lives together given how many years still lie ahead. In an effort to keep things fresh, they look for find new ways to renew the spark…but some drama gets drummed up in the process and their marriage has to weather the storm. The story was cute but the plot was too slow for me–it was a little boring at times!

The More of Less by Joshua Becker

I know many people are burnt out hearing about Marie Kondo and “sparking joy,” but if the idea of owning less appeals to you in any way, The More of Less may be a good read. It’s short and to the point–but be aware that the author weaves in his own religious beliefs pretty consistently throughout the whole book. This personally didn’t bother me and I thought the author did a good job capturing the big picture of minimalism…that said, nothing in here is incredibly groundbreaking and can’t be found elsewhere. If you’re newer to minimalism, want to be motivated to pare down, or just really enjoy the subject (like myself!), it’s worth the quick read.

Recommend? Yes, if you’re looking for a light read on decluttering and owning less.

A River of Stars by Vanessa Hua*

This is one of the best books I’ve read lately. It’s beautifully written and while I definitely wouldn’t call it a “feel good” read, it’s full of the highest of highs among the lowest of lows–little victories and major struggles for the protagonist, if you will. It’s one of those stories that’ll have you rooting for the main character, Scarlett, who, unbeknownst to her family, is newly pregnant with her boss’ child and arrives in California for the American dream. Life throws many challenges her way, and Scarlett finds herself fleeing from the secret maternity home–where her lover had sent her to live–and goes out to find her own footing in this foreign country. What she doesn’t know is the baby’s father is not too far behind her, and you’re on the edge of your seat hoping Scarlett manages to avoid his path, conceal her identity, and develop her own fulfilling and life with a new baby.

Recommend? Yes!! It’s a little heavy, but so good.

I mentioned this book back in the fall but regardless of your romantic status, it is absolutely worth reading! It uses five buckets to down how people prefer to show and receive love and affection–through acts of service, words of affirmation, gift giving, quality time, and physical touch. It’ll help you learn more about yourself and those around you, including friends and family…as kooky as it may sound, the love languages really do impact your day-to-day life and happiness, and it’s clear there’s a reason this book is as popular as it is! I knew my primary love language was acts of service, but didn’t know the degree to which the others affected me until I read this book. It definitely gets the discussion going…I’ve talked extensively about this subject with both J and my girlfriends!

If you’ve debated picking up Michelle Obama’s book, do it. The hype is real, whether or not you live in DC (or America, for that matter), regardless of your political preferences, and whether you’re a male or female. It’s definitely targeted towards women but everyone can learn something as Michelle chronicles her life as a young girl in Chicago all the way through her role as First Lady. I’ve always liked her, but I came out of this really, really liking her–the way she talks about years of balancing work and motherhood, down to the story of how she met Barack…it’s all very candid and personal, and you almost forget that she’s not actually a IRL friend. I have a few memoirs on my “to read” list and I can only hope they’re remotely as captivating as Becoming!

Ok unpopular opinion: I was not much of a Circe fan! I had really high hopes for this book after seeing what felt like universal praise…I also love Greek mythology so thought this would be a winner! It took me awhile to get into it and by the time I did, I was just…kind of over it? Circe has been banished to a deserted island and faces dangers from both men and gods. She gives birth to a son and has to balance the power of witchcraft she was born with, coupled with the relationship she’s developed with mortals. The book started out kind of slow, and I think I’d mentally checked out by the time it started holding my attention. I don’t really like abandoning books part way through but given how long it took me to chug through this, wish I’d put it down and picked up something else!

Recommend? I wouldn’t, but I seem to be in the minority.

*Thank you to Random House for sending me this book!