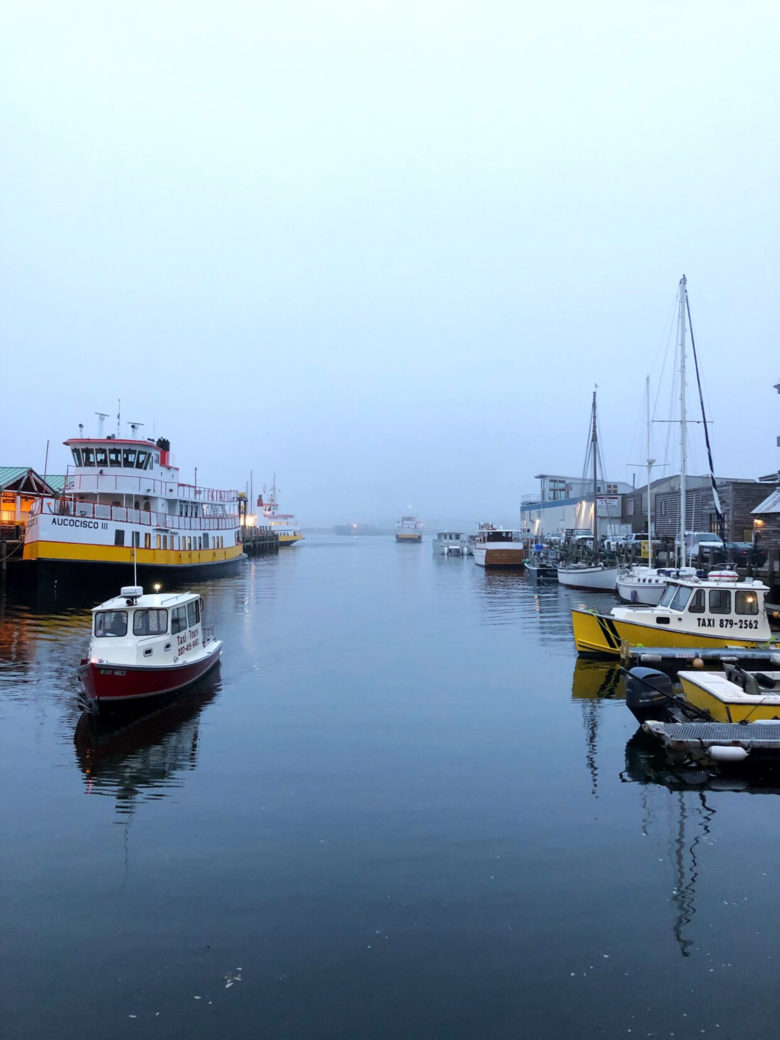 A couple weeks ago, we took a quick two day trip to Portland, ME (thanks to the Companion Pass!) and spent Saturday-Monday exploring the city. We wanted to do a dedicated trip to Portland because we both know we love the smaller Maine towns and without intentionally dedicated a couple of days to Portland, would likely inevitably end up glossing over the city beyond a quick meal or two en route to another destination. I’d only been to Maine once before this and just spent a mere couple of hours in Portland, so our plan to skip renting a car and stay right in town worked out perfectly!

This was also one of the few trips we’ve taken where I’ve done virtually no planning minus making a list of restaurants to try and setting up one “activity.” We had dinner reservations Sunday night but that was the only set plan, and it really ended up being the best way to spend the weekend!

How we got there

BWI is a Southwest hub so we took the train there from Union Station (the Amtrak there, and the MARC back) and hopped on a direct flight to Portland. The flight time is about an hour so our travel time really came from getting to and from BWI! Once you arrive, PWM is only about a 15 minute drive from downtown.

Last time we went to Portland, we flew into Boston and were traveling with our friends who have a car. It’s an easy two hour drive from Logan!

We stayed at the AC Hotel in downtown Portland and used a combination of points and our annual free night certificate to cover our stay. The location couldn’t have been better—it’s right on the water by the Old Port and was a 15 minute max walk from everything we did— and the staff is incredibly helpful and kind. The friendliness and general hospitality was definitely a theme in Portland!

There are several hotels and Airbnb’s in the vicinity so there’s something for every budget! We’re entering the high season (apparently it really picks up after July 4) so prices will be higher, but being okay with slightly lower temperatures and planning your trip for May, June, or October (when it’s cool but not freezing, usually!) is a great way to save a few bucks. What we did + shops I loved

Like I said before, we didn’t have many constructive plans but jumped at the chance to take a lobstering cruise with Lucky Catch! Jackie highly recommended them to me a few months ago and I mistakenly thought you had to catch the boat outside of Portland-proper. Turns out I was wrong–they dock right on the water downtown, which was less than a quarter mile from our hotel! The location couldn’t have been better, and the 1.5 hour cruise is a modest $35/person. It’s basically an interactive lobstering cruise where you get to help catch them, learn about the lobstering industry, and if you’d like–buy one to go after the ride! Be sure to book early–this is a really popular activity in-season!

Uncommon Paws: We didn’t stop into many stores but this adorable pet store was one of them! It’s on Exchange Street right by The Holy Donut and they make a bunch of leashes and collars in-house. We picked up a leash for Millie and loved browsing their impressive selection of treats and accessories.

Gus & Ruby: The cutest letterpress + gift shop, also right on Exchange Street. The other location is in Portsmouth, NH and they have a perfectly curated product selection.

Eastern Promenade: If you walk east from downtown, you’ll hit the Eastern Promenade which is an area with lots of large homes, condos, and green spaces. It felt very local and was a great way to work off all our food…if you have to skip something, I’d make it this, but it was a good way to get some exercise and see a more residential and less touristy part of the city.

The one thing we didn’t do was take a ferry to Peak’s Island, which is inexpensive and easy to do. We were debating between that and the lobstering tour and I’m glad we stuck with Lucky Catch but would love to venture to Peak’s sometime. You can rent golf carts and drive around the island, which sounds like a great way to spend an afternoon! Where we ate + drank

J’s Oyster: Our driver from the airport to the hotel recommended J’s when were said we wanted a casual seafood spot for lunch and it was exactly what we were hoping for! It’s full of locals and some tourists, too, but if you’re looking for a no-frills place with excellent seafood, it’s the perfect place to go. It’s smaller than some of the other places on the water but worth the wait. 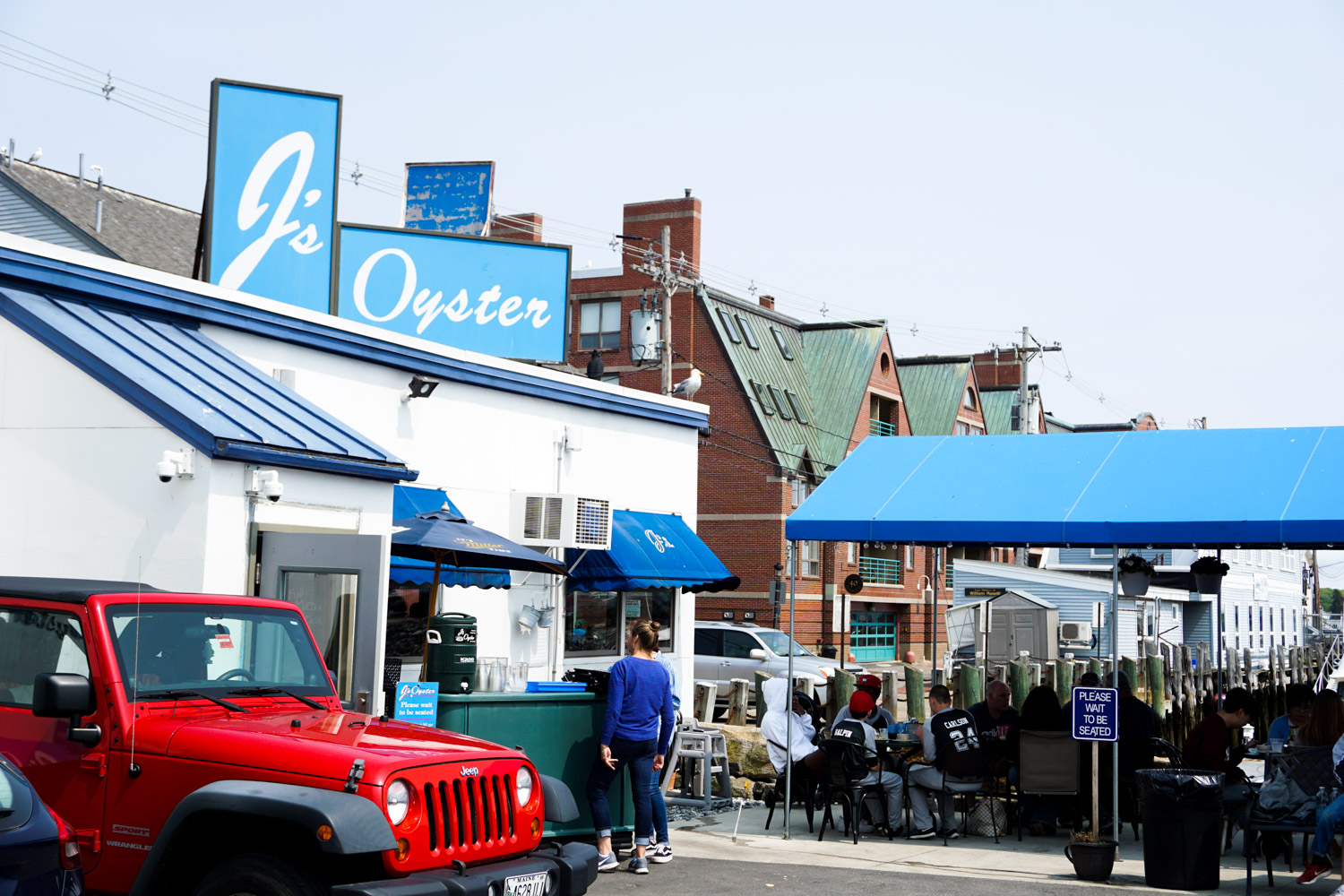 Portland Lobster Company: A pretty touristy spot right on the water that has live music and a huge, bustling patio. We had drinks Saturday afternoon after lunch and it was packed even around 3pm. I can’t speak to the food but the ambiance was fun! It’s really casual–you order at the counter and get a buzzer to pick up your food. 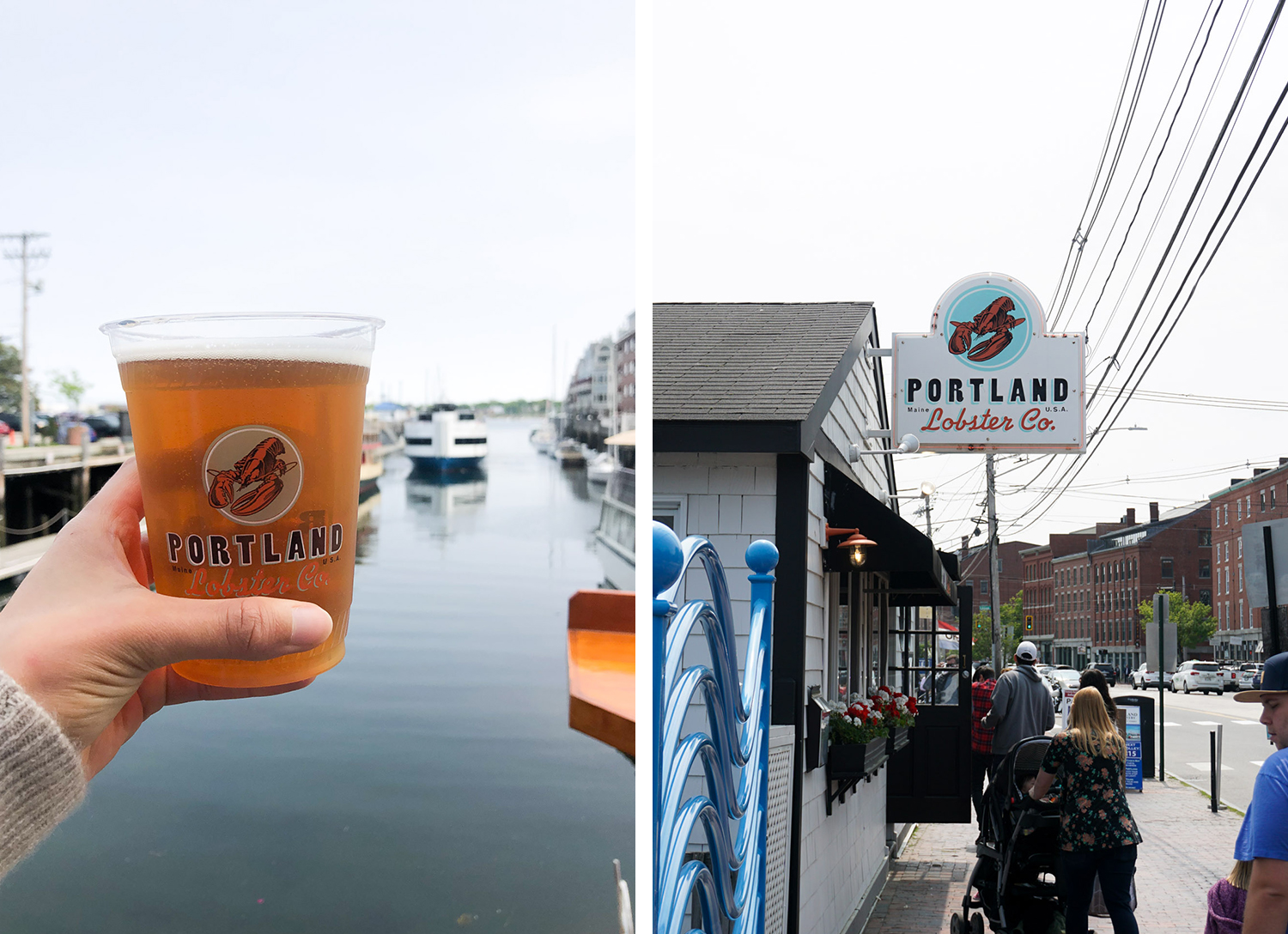 Flatbread Company: Pizza in Portland wasn’t initially that high on our list but everyone raved about Flatbread Company and I’m so glad we made it there Saturday night. It’s a phenomenal pizza spot with a casual, family-friendly ambiance, waterfront views, and great beer selection (a common theme in Portland!). I wasn’t feeling 100% but still thoroughly enjoyed the food, which is saying something…they’re randomly about to open a location in Dallas so I’m excited to take my parents there next time I’m in town! Holy Donut: Another unanimous Portland recommendation! Controversial opinion but we weren’t blown away? They’re undoubtably good donuts but if you’ve had other speciality varieties (so something other than Dunkin’, Krispy Kreme, etc.) they’re fairly similar. If you’re in the mood for donuts and are there overnight, it’s worth stopping in–I just think it was a little too hyped. 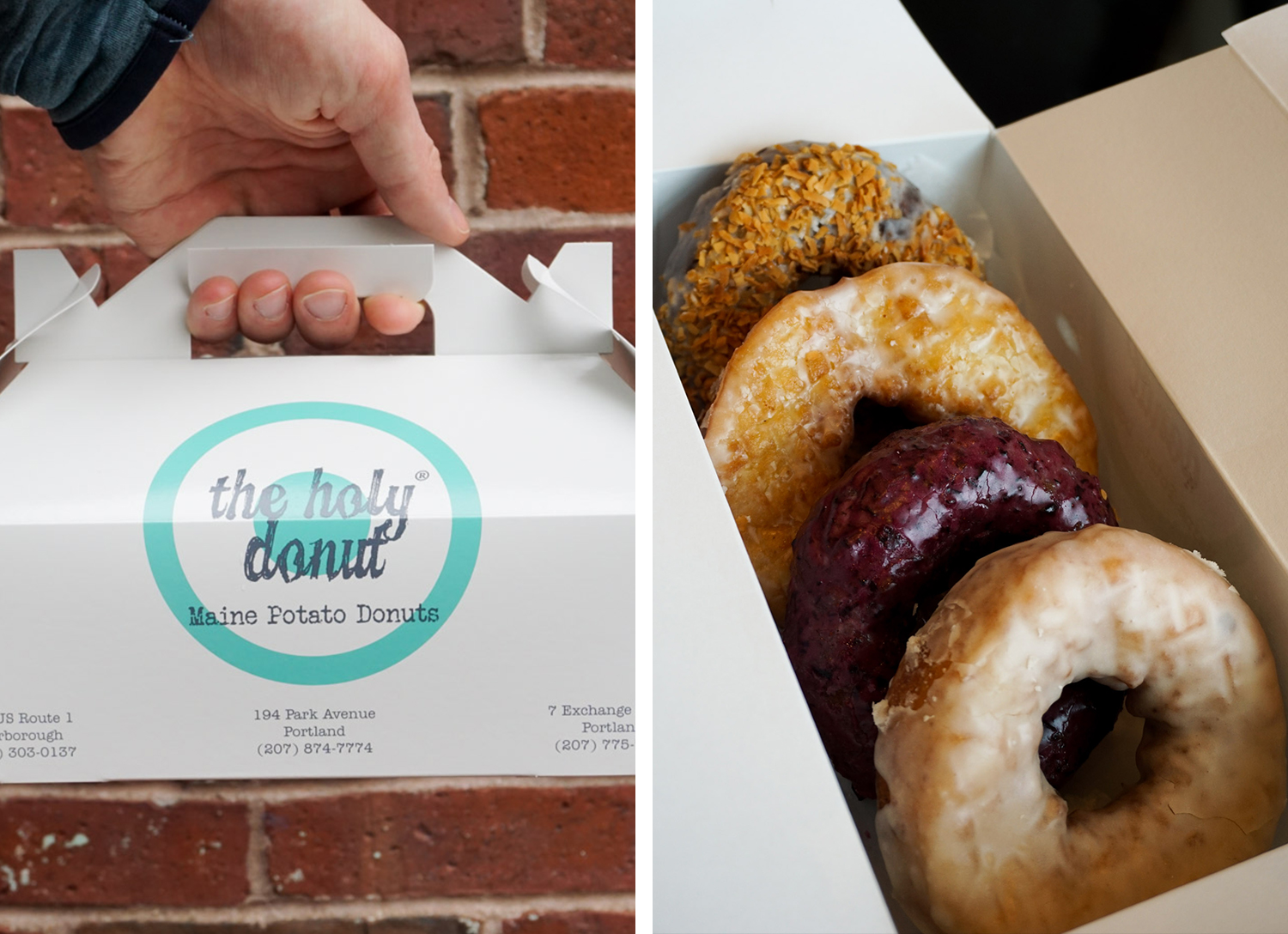 High Roller Lobster: We expected this place to be really divey but it was basically an upscale seafood dive meets diner in the best possible way! They have some unconventional items on the menu including a lobster cheese crisp taco and a “Fried Lobby Pop” (basically a lobster corn dog). The portions were generous and everything was delicious! 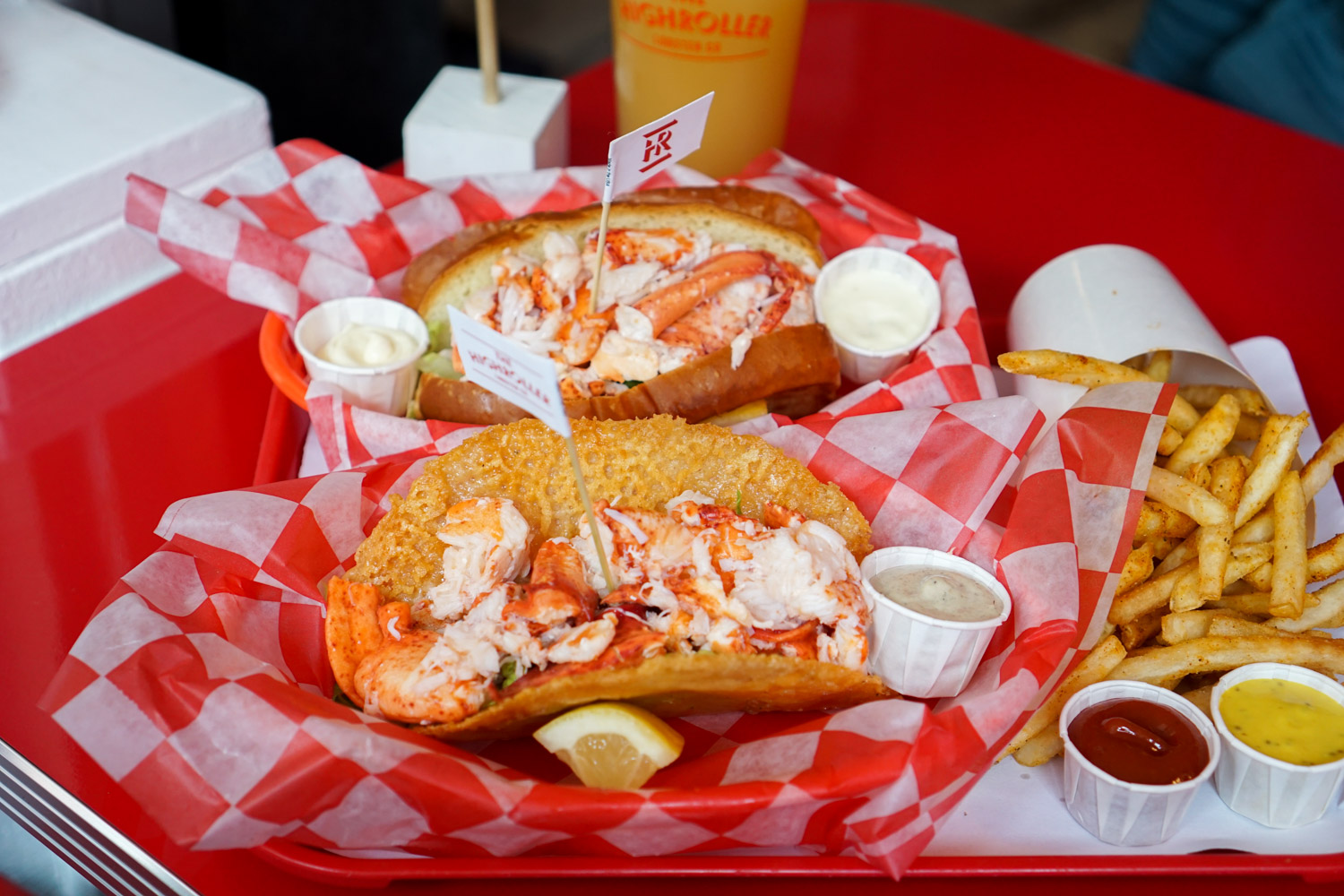 Mount Desert Island Ice Cream: A Maine staple that’s your quintessential ice cream shop with a number of unique flavors! I’m a sucker for ice cream on vacation so made it a point to stop in Sunday afternoon. There’s also a location in DC, so I’m planning to check that out this summer.

Vena’s Fizz House: A fun little cocktail bar and shop with a small, fun bar and really good concoctions. They make their own accruements (bitters, tonics, etc.) and have really inventive combinations. We stopped in for a Sunday afternoon drink! 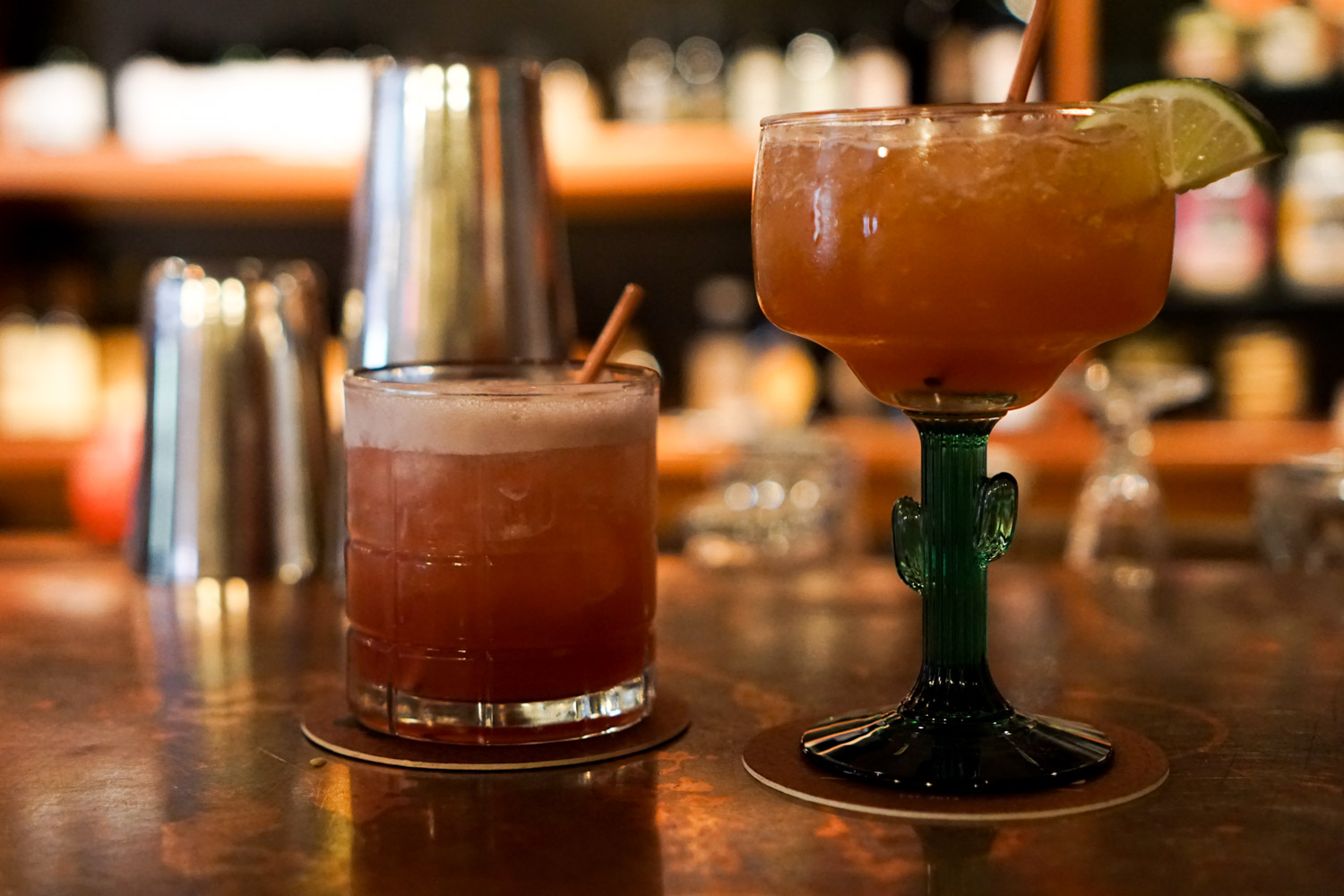 Fore Street: Our one reservation was well worth making a reservation a few weeks in advance! My pilates instructor actually recommended this spot to us and everyone we met in Portland ahead of our dinner affirmed our decision to dine there. It’s right above it’s partner spot, Standard Baking Co., so they serve the bakery’s phenomenal bread that essentially make ordering the mussels a no-brainer. It was our splurge meal but was 100% worth it…the service was incredible! We split the mussels, J got the sea bass, and I took a break from seafood and got the chicken. We also took dessert to go and ate it while watching Veep in our king size bed, because vacation. Their menu changes everyday but everything was delicious and I would definitely go back!

Standard Baking Co.: We snagged brownies on Saturday and walked over to pick up pastries for breakfast on Monday morning–this place is good, you guys. I wish we’d tried more because everything we had was incredible and everything else looked so good. I’d say this is a can’t-miss spot but be prepared for a bit of a line on weekends! Shipyard Brewing: There are SO many breweries in Portland and while we both like beer, visiting a bunch of them wasn’t a priority this time around. We did, however, stop into Shipyard–which was right next to our hotel–at 10am on Monday to split a flight ahead of lunch. It’s a great space (that apparently gets very crowded in-season/at normal times) and I’m so glad we make it a point to go! There are a handful of breweries in walking distance of downtown, and even more a short drive away. 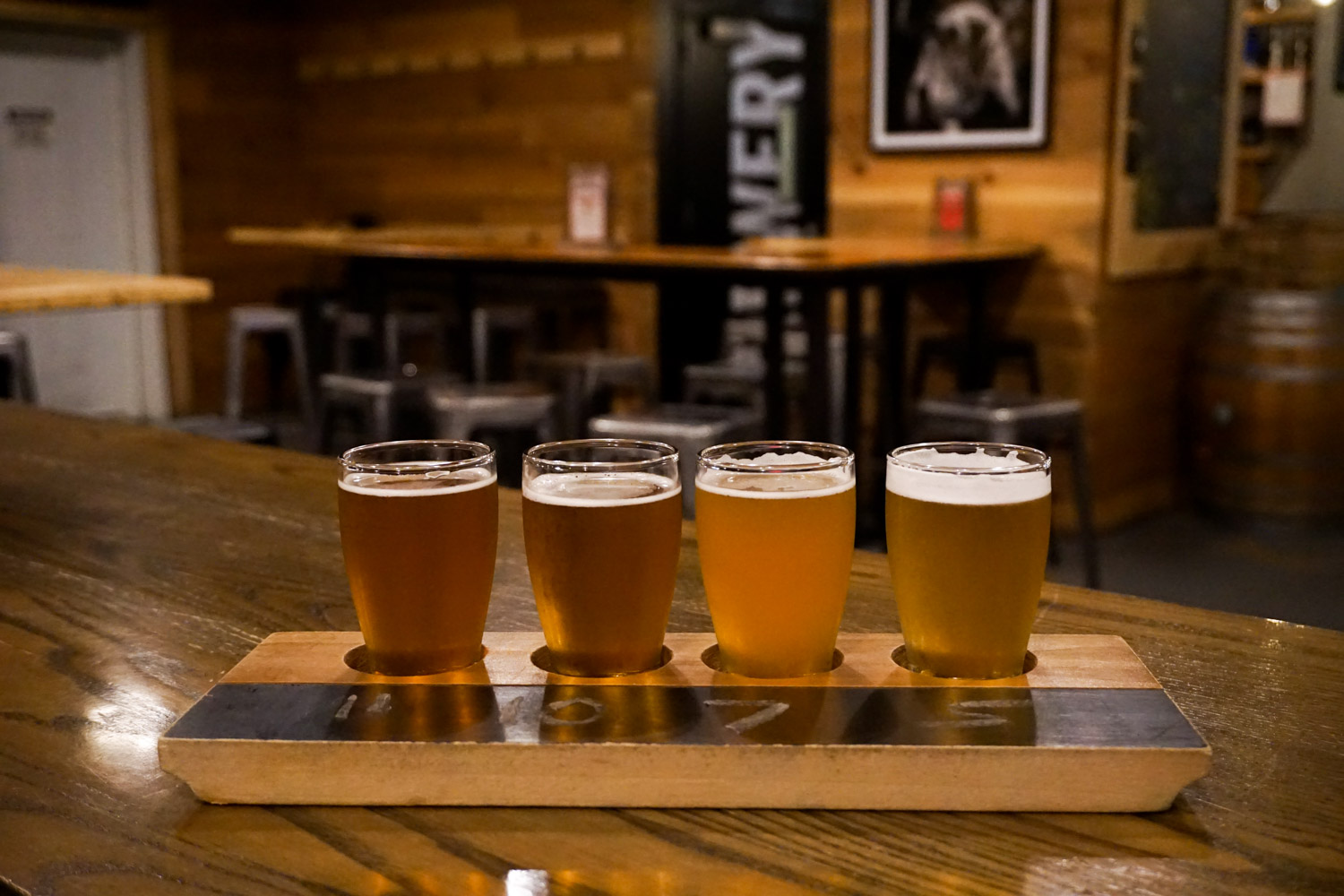 Eventide: This has always been the most highly-recommended Portland spot whenever I hear people talking about the city’s food scene, and that was evident from our first glance when we were driving in Saturday and saw a line out the door. The tiny restaurant doesn’t take reservations and fills up so quickly, so we saved it for lunch on Monday instead of fighting the weekend crowds. We easily grabbed two seats at the bar at 11:30 and within about 45 minutes, every seat was taken. We shared oysters (I’m not even normally an oyster person, but these were fantastic), the lobster roll (it’s a brown butter lobster roll, which I’d never had and now love), and the fish sandwich. It was all delicious! I wish I could pick favorites but every meal we had was so good…but seriously, there’s a reason why people say not to miss Eventide. There’s a location in Boston, too! The Porthole: We ate here last time we were in Portland and stopped in for a beer before flying out on Monday. It’s a super casual bar and I remember the food being good! They have great outdoor seating, too. Duckfat: Seemingly every guide to Portland also includes the poutine at Duckfat, and you don’t have to tell me twice to get fries with cheese curds! Duckfat is even smaller than Eventide but luckily they have a modified to-go menu, so it’s easy to try the poutine without a wait. We got it right before heading to the airport on Monday and it was a great afternoon snack.

We missed going to Scales, a gorgeous waterfront restaurant with an amazing bar! It’s going to be a must next time we’re in Portland…I’d imagine it’s great, since like I said before, every.single.thing. we ate and drank was notably good! 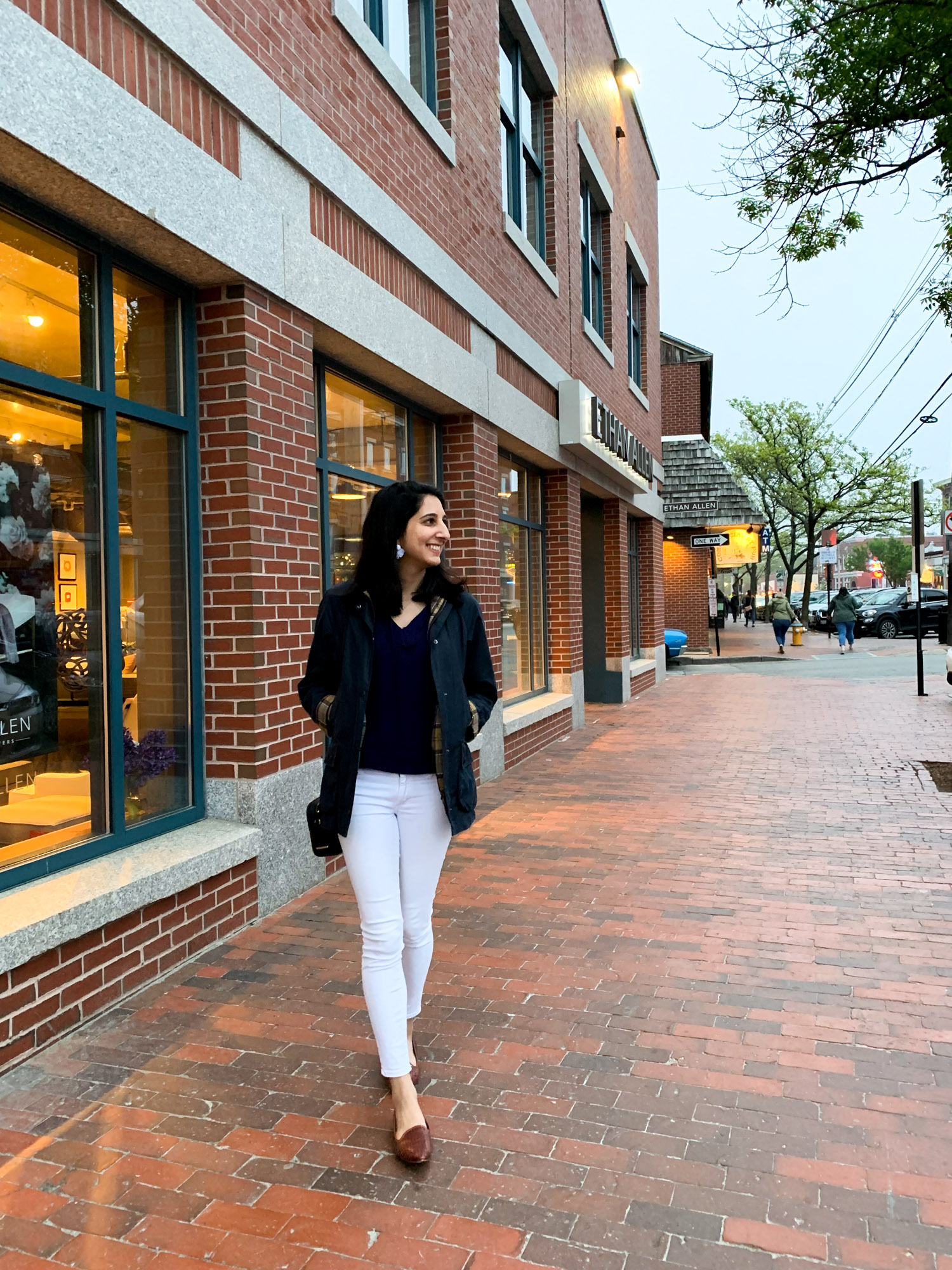