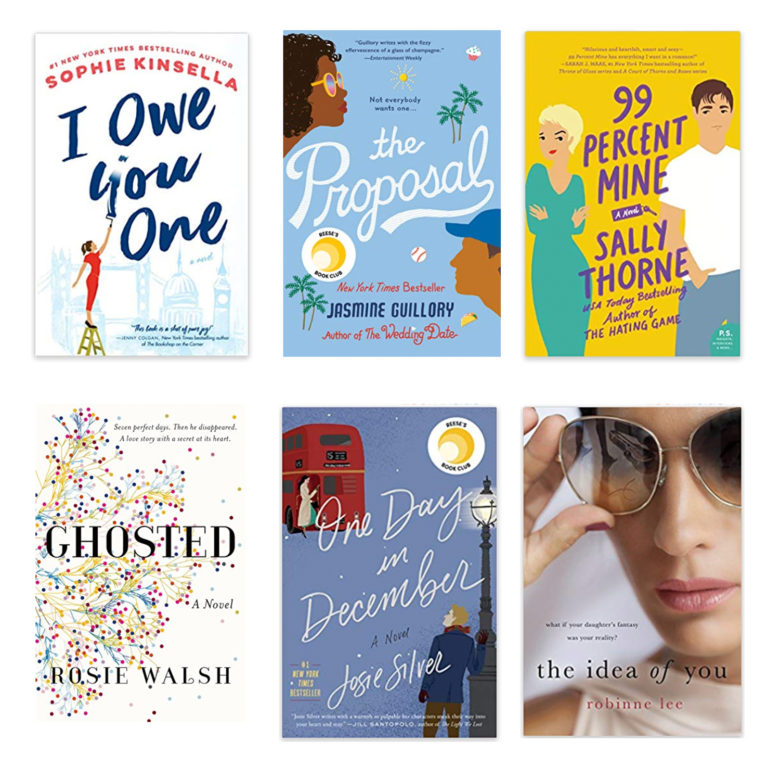 After belatedly writing up some reads in this post, we’re practically caught up after today! I read some of these earlier in the year and finished The Idea of You a few weeks ago. I’ve read a couple books since and promise to be more timely with these recaps since analytics tell me that you guys love them, so thanks for your patience and happy reading!

Nikole and Carlos meet at a baseball game after Nikole’s [terrible] boyfriend proposes to her on the Jumbotron in front of the entire crowd. She turns him down and Carlos saves Nikole from the chaos that ensues and surprise, surprise, he ends up being her rebound.

The story is cute but the whole thing felt really predictable! It’s actually a sequel to The Wedding Date which I just finished reading and enjoyed a lot more. (There is character overlap but it’s not a consistent plot line.) Apparently Guillory is coming out with a third book in the series later this year and I’ll definitely pick it up–so while The Proposal wasn’t my favorite, I’d still recommend it if you’re looking for something quick and light.

Darcy and her brother inherit their grandmother’s home and he flies his best friend, Tom, in to restore the property. Darcy has a history of dating questionable men but Darcy goes from knowing Tom in a close-friend-almost-family capacity to falling hard for him romantically all these years later. She’s determined for them to be more than just close childhood friends but as one would expect, that’s easier said than done.

I didn’t love The Hating Game and couldn’t really get into this, either! I think it’s because the protagonists both drive me nuts with so much of their character development being framed around getting a guy or playing hard to get–it felt a little shallow and cliché. That being said, I definitely seem to be in the minority as both of these books were pretty popular…I’ll see The Hating Game when the movie comes out, but I’m not as into it as many others seem to be!

I Owe You One

London-raised Fixie meets a handsome stranger in a coffee shop and he ends up giving her an IOU for saving his laptop from a minor disaster. Around the same time, her childhood crush comes back into her life and the three end up getting looped into this triangle of love, IOUs, Fixie trying to keep everyone happy, and family drama.

I always say it but I’ll do it again: I LOVE Sophie Kinsella! While nothing compares to her Shopaholic series in my mind, I always enjoy her wit and how she develops the main character–and this was no different. Like all of Kinsella’s books, it’s a fun, light read with a female protagonist faced with her own problems and a set of issues out of her control. They’re great beach reads!

Sarah and Eddie meet and fall instantly into a passionate relationship, but Eddie leaves for a pre-planned vacation and promises to call…but Sarah doesn’t hear from him again. Despite friends telling her to forge about him and move on, Sarah knows something isn’t right and is determined to figure out what’s happened to him.

I liked this book while I was reading it because it successfully bought me into Sarah’s emotions…the ending is somewhat predictable but with a few twists that you don’t really see until part way through the story. The part that knocked down the rating for me is that the middle of the book was kind of forgettable? I was into the story but the plot structure and details didn’t feel very memorable once I hit the end. Don’t get me wrong, it was still a good read– but the best books stick with you longer than that!

One Day in December

This was easily one of the cutest books I’ve read in years…bonus points if you read it over the holidays and can doubly soak up the cozy, Christmas-in-London plot line! One day while on her bus home from work, Laurie makes eye contact with a man on the street and it’s love at first sight. He’s in the back of her mind for months, and she has her eyes peeled for him hoping their paths will cross again. Then she does see him–Jack–again one day–on the arm of her best friend at a Christmas party.

The book chronicles the upcoming years has the three navigate life and love…it’s a wonderfully heartwarming story and I couldn’t put it down. The character development is so good and the emotions they feel are so real. I do have a soft spots for books set in the UK, but this one was especially strong in every way. Highly, highly recommend!

The Idea of You

Solène is a 39 year old art dealer and mom who chaperones her daughter and her daughter’s friends to a concert and backstage meet + greet with world famous boy band August Moon. She and the 20 year old lead, Hayes Campbell, have an immediate connection and fall deep into a secret relationship that takes them around the world…literally, thanks to Hayes’ band schedule. The story follows their passionate affair through stages of love, stress, confusion, and everything in between–all while she’s dating her teenage daughter’s crush.

I went into this with really high expectations because Becca was practically obsessed with it and I can definitely see where the hype comes from! If you’re looking for a juicy read with genuinely great character development, this ones for you. It’s definitely a fast-paced romance that had me hooked from the beginning to the end. It didn’t get 5/5 from me because I found myself rolling my eyes at some of Solène’s decisions, but I’d still recommend it in a heartbeat if you like a well-written romance!