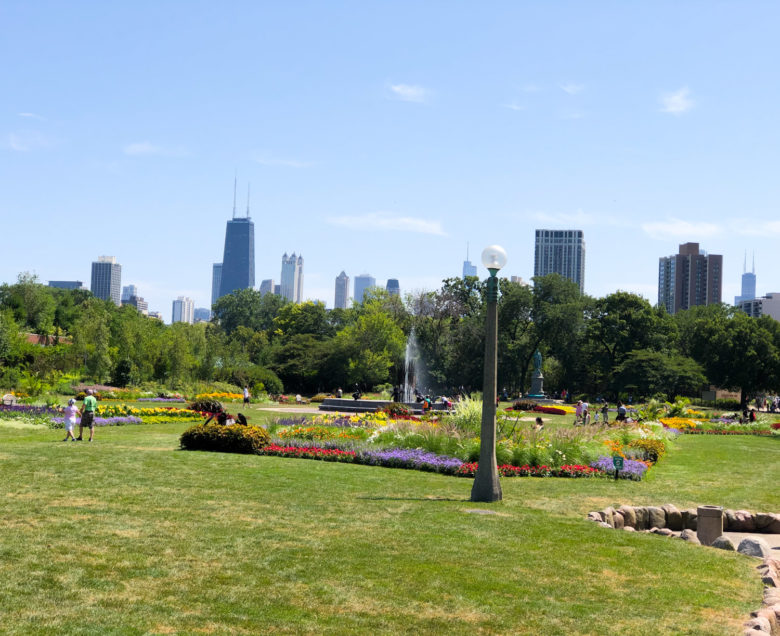 I recently spent wonderful three day weekend visiting one of my college bffs in Chicago and wanted to share a quick trip recap since we were in a couple new to me neighborhoods and ate very well! K and I lived together in DC when first graduated six years ago (four of us had the best, most fun apartment and despite stressors over “adulting” and navigating our first entry-level jobs, that will forever be one of my favorite years!) and she moved to Chicago right after that year and has lived there ever since. The last time I visited her was in January 2015 so not only was it awhile ago, but it was also absolutely frigid. This time was so different…it’s true when they say Chicago is incredible in the summer! I unplugged quite a bit (to the point of posting no IG Stories until I was back in DC, which sadly feels like the definition of a digital detox in 2019) and didn’t focus too much on “content creation,” but we did eat and drink at some great places that I wanted to share! There are a few iPhone snaps but I honestly had my phone in my bag more than I have on any other trip so we just have the highlight reel! 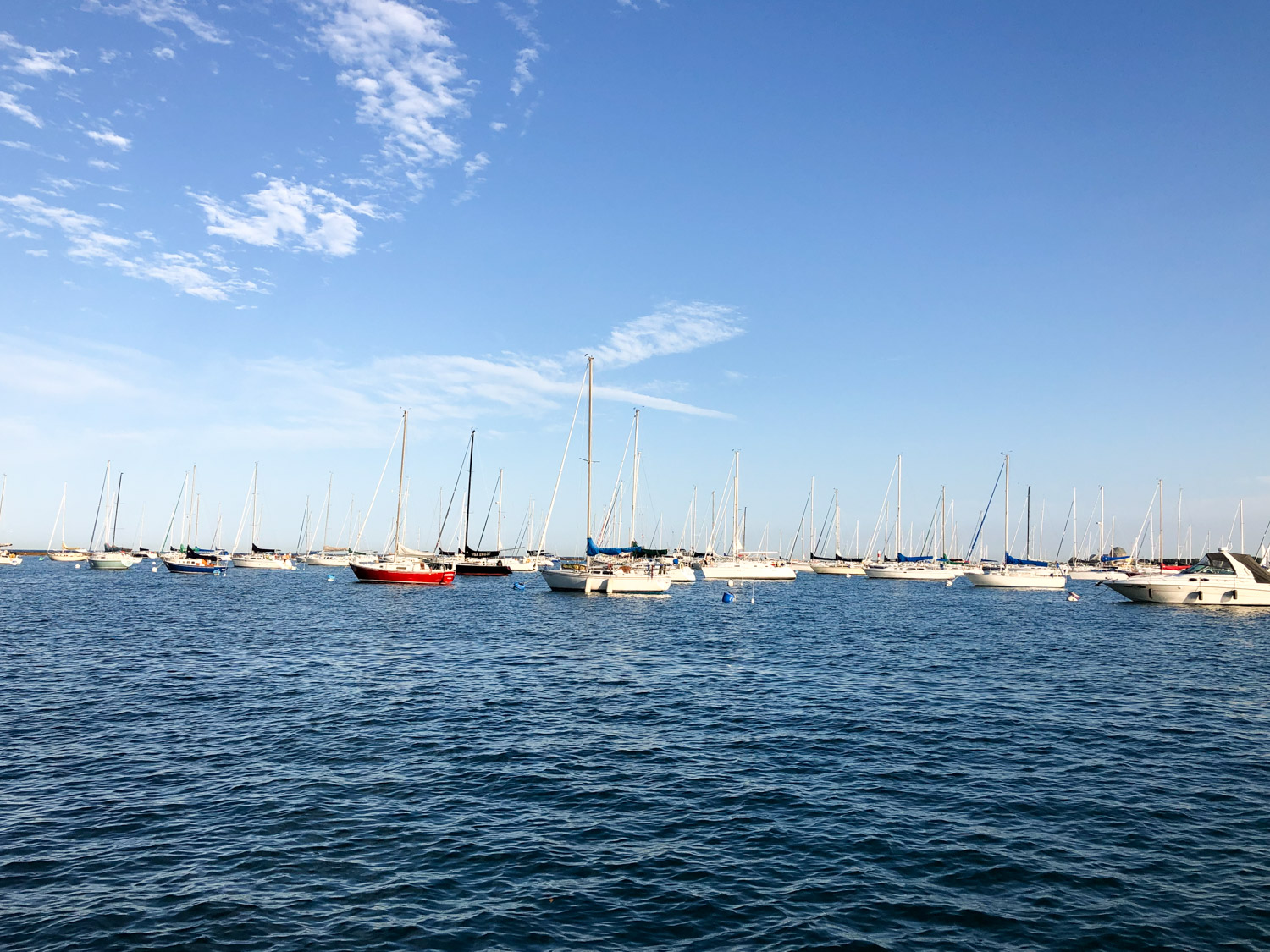 I flew Southwest direct from DCA to Midway and took the “L” train (Chicago’s metro/subway system) to K’s apartment near Andersonville. The trip took just over an hour but was really easy…it’s only $3 vs. ~$40+ in a cab or ride share, plus my flight landed at 4pm so it would have coincided with rush hour. The L stations are stair-heavy so if you have a lot of luggage it could be tricky, but I just had a small rolling carry-on which wasn’t bad at all.

We were both hungry so I dropped off my stuff and we walked over to grab Mexican food at Octavio in downtown Andersonville before spending the rest of the night on the couch planning our weekend catching up over wine!

We started Friday with a yummy breakfast at Lost Larson and walked around by the beach/lake before taking the L downtown for lunch and our boat tour. This had been on my Chicago to-do list for years so we booked an afternoon cruise with Wendella, the oldest boat tour in the city. Katie highly recommended it and it did not disappoint! Our guide Jack was hysterical and full of fun facts and corny jokes and I think it’d be enjoyable whether or not you’re specifically interested in architectural history or just want to learn more about and see the city! 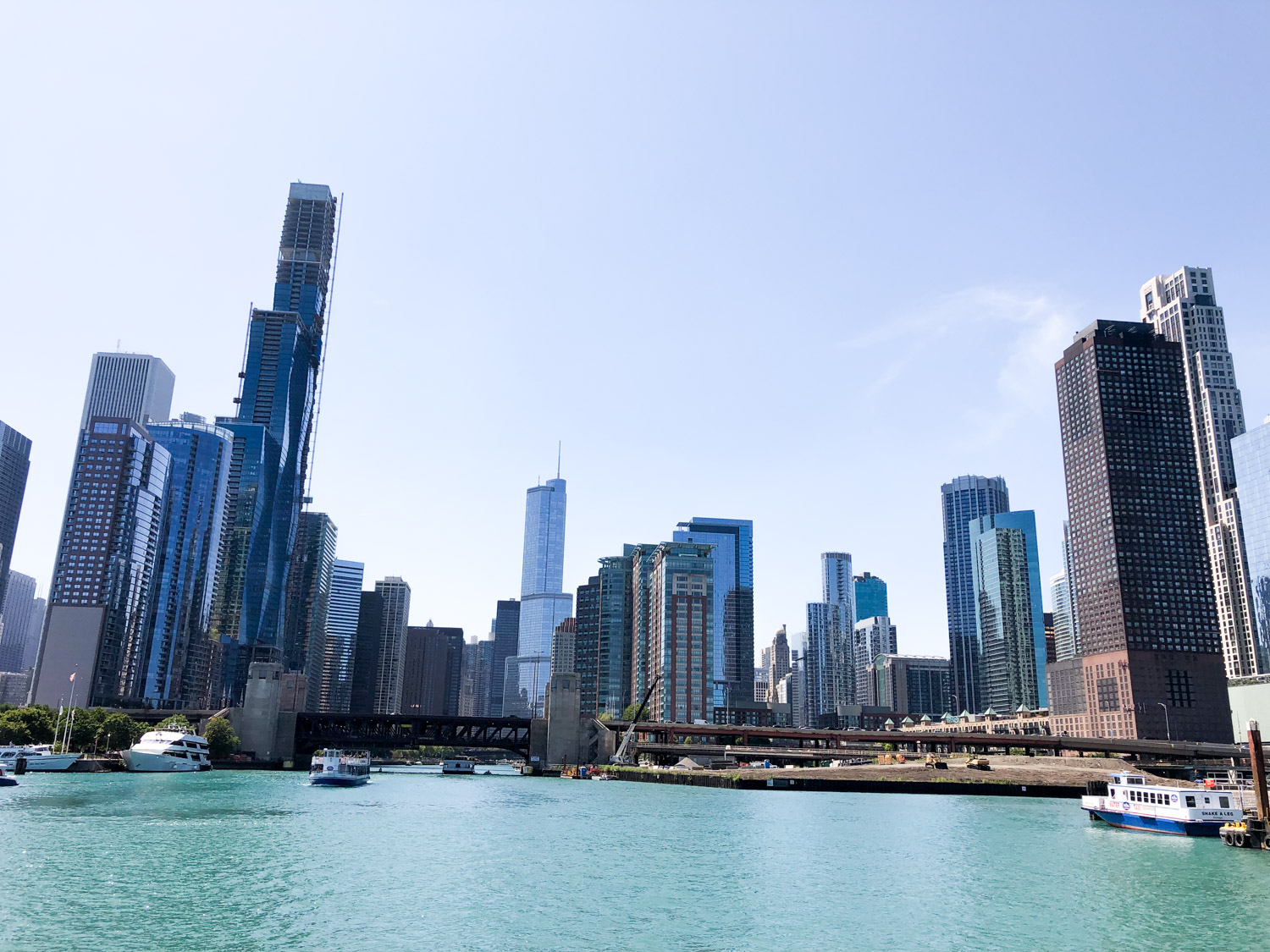 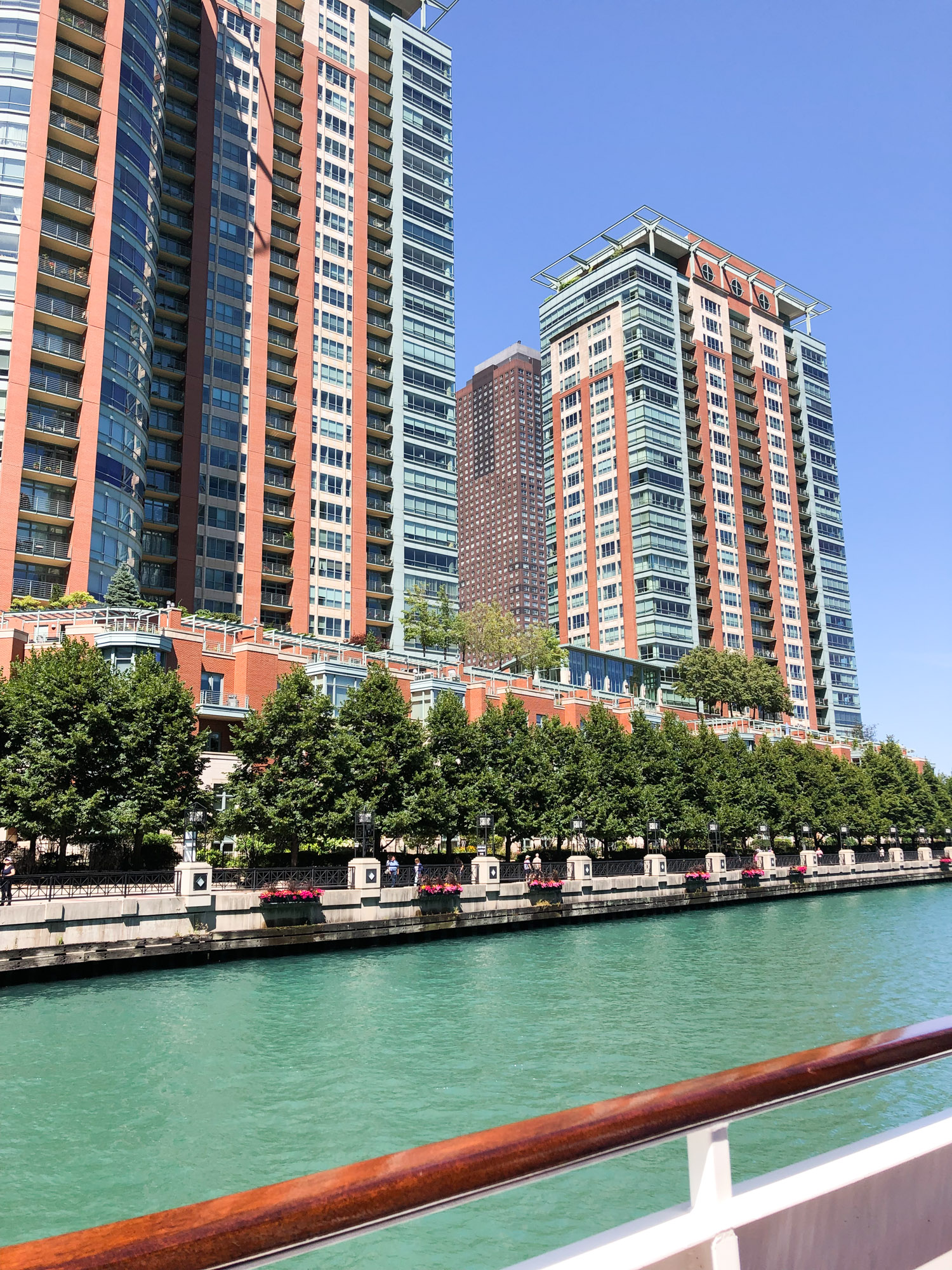 Post-boat we popped into Nordstrom—the one on Michigan Avenue is truly stunning—before heading back to Andersonville to freshen up. We’d initially planned to head back to the Loop for dinner + drinks but were worn out from our day in the sun and opted for a nearby BYOB sushi spot and a martini bar instead. We ended the night FaceTiming with two of our other best college friends who were also together and it was the perfect way to end a full day! Saturday saw a slower start thanks to the fun from the night before but we spent most of the afternoon walking around Lincoln Park and the zoo. The zoo is free and the views of downtown are incredible, so I’d recommend it if you’re considering a visit. We went home for a bit and showered before heading back to the Loop to hit up the Bean, walk along the lake, and grab dinner + drinks. I left for DC early the next morning! 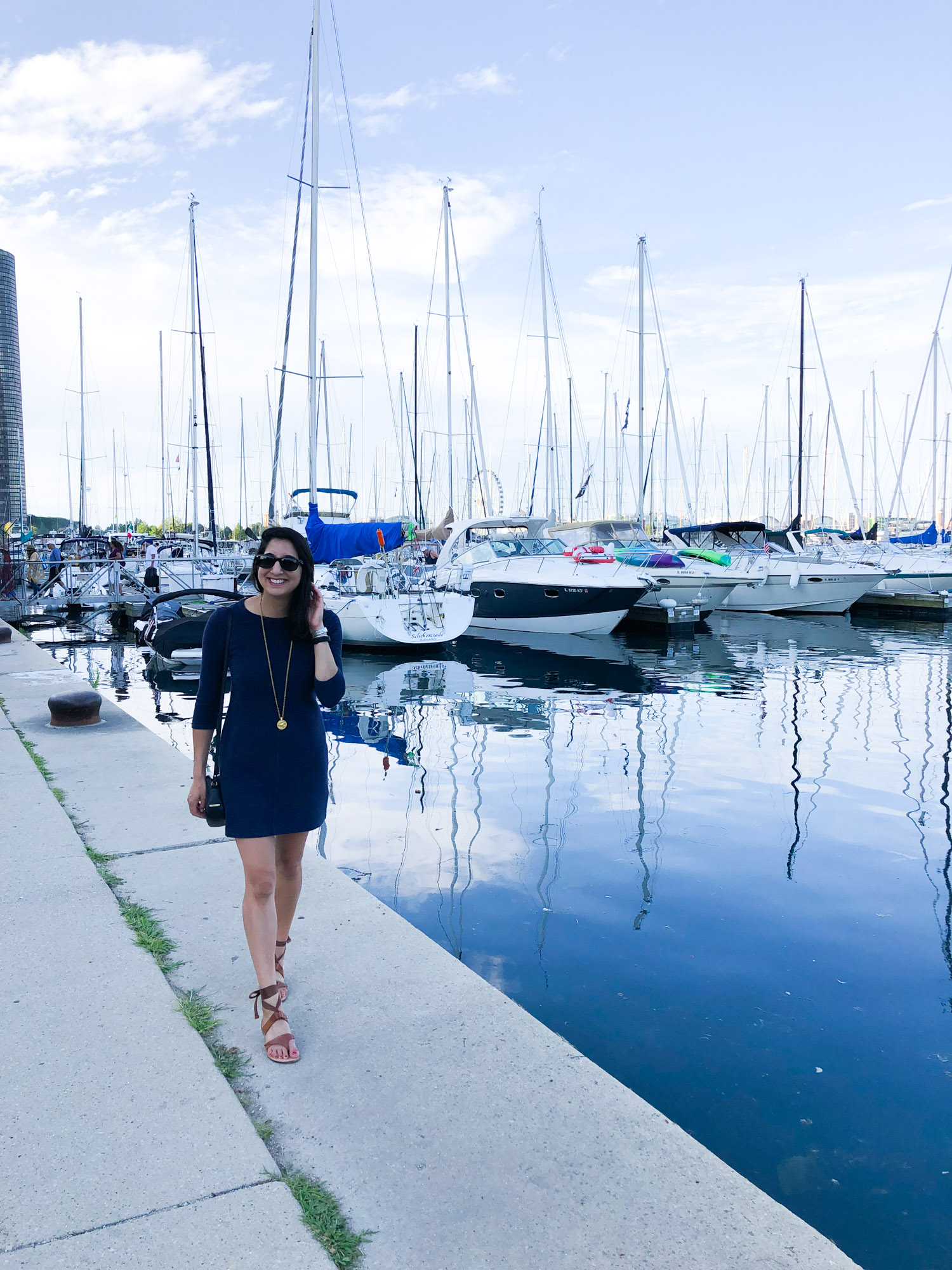 Octavio: A lively Mexican restaurant in Andersonville with a great Thursday night happy hour! We went there right after I arrived and got frozen margaritas and guac to start, and I had the Baja fish tacos with rice + beans. Everything was great! They also have tons of vegetarian options that are clearly noted on the menu. Try and get a table by the window—they open up onto the street when the weather is nice! Lost Larson: K told me she thought of me the first time they went to Lost Larson so I knew I was in for a treat! It’s a Swedish-influenced bakery + restaurant and they have a huge selection of pastries and breakfast items in the morning. We saw lots of people enjoying food and wine in the evenings, too, and everything I saw looked amazing.

Lou Malnati’s: I LOVE deep dish pizza and Lou Malnati’s is a Chicago staple. There are a few locations and we went here last time I visited. While it’s definitely touristy, it’s a great spot for reliable deep dish if you’re checking that off your Windy City bucket list.

Ora Sushi: I wish BYOB spots with no corkage fee were a thing in DC! We were so full from lunch and grazing on apps at home so sushi felt like a logical option on Friday night. Ora is a great little spot in Andersonville and along with your traditional sushi offerings, they have some really interesting specialty rolls. We brought our rosé and had the surf & turf and dragon rolls (along with a few other simpler varieties) and the total was about $35 per person including tip–a great deal for the quality and food we got! 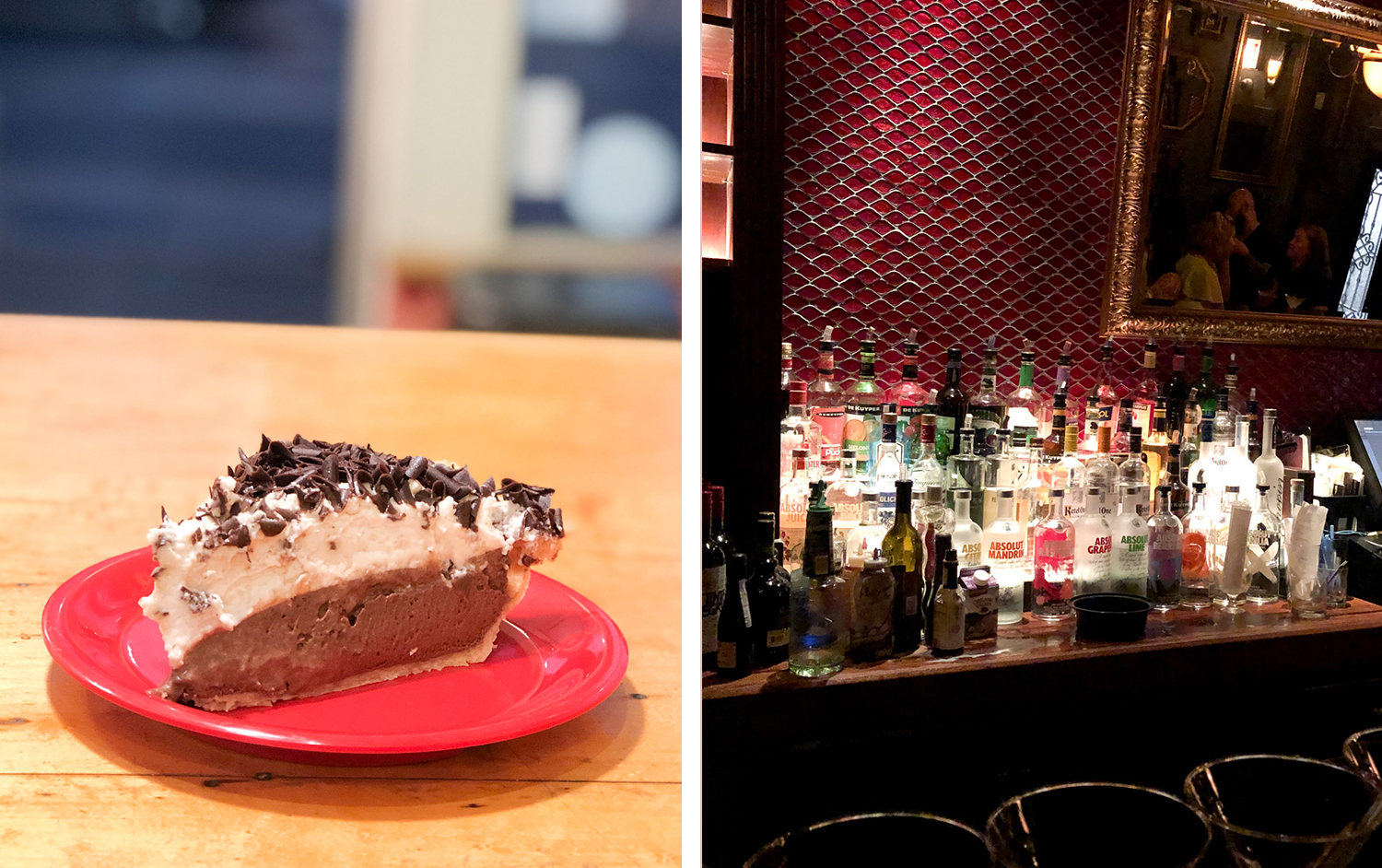 First Slice Pie Cafe: K’s boyfriend and I have similar food preferences so I didn’t hesitate when he suggested stopping by First Slice Pie Cafe after dinner on Friday! I absolutely LOVE chocolate pie and their chocolate silk was awesome. They have a bunch of pies (full + by the slice) as well as a full savory food menu!

Marty’s Martini: A fun gay bar in Andersonville that unsurprisingly serves great martinis! It’s tiny inside but they have a little patio, too. I love that they have two martini sizes–I was warned that these drinks are strong (and can attest that to be true!) so was grateful I got a “small.” I thought the Ora + First Slice + Marty’s combination made for a wonderful night out in Andersonville! Hampton Social: They’re known for their neon “rosé all day” sign but I’m happy to report that the food at Hampton Social is just as notable! We got day-of reservations at the Streeterville location for dinner on Saturday and it was packed. One thing I loved is that the tables weren’t completely on top of one another…in NYC and DC, popular restaurants tend to cram you so close together! My Bees Knees cocktail had this adorable honey mallet on top and everything we shared was incredible: the parmesan fries with truffle aioli, the Brussels sprouts, the burger, and the Asian chicken salad. I’ll be trying to replicate the Brussels at home—they were served over goat cheese and we were obsessed! 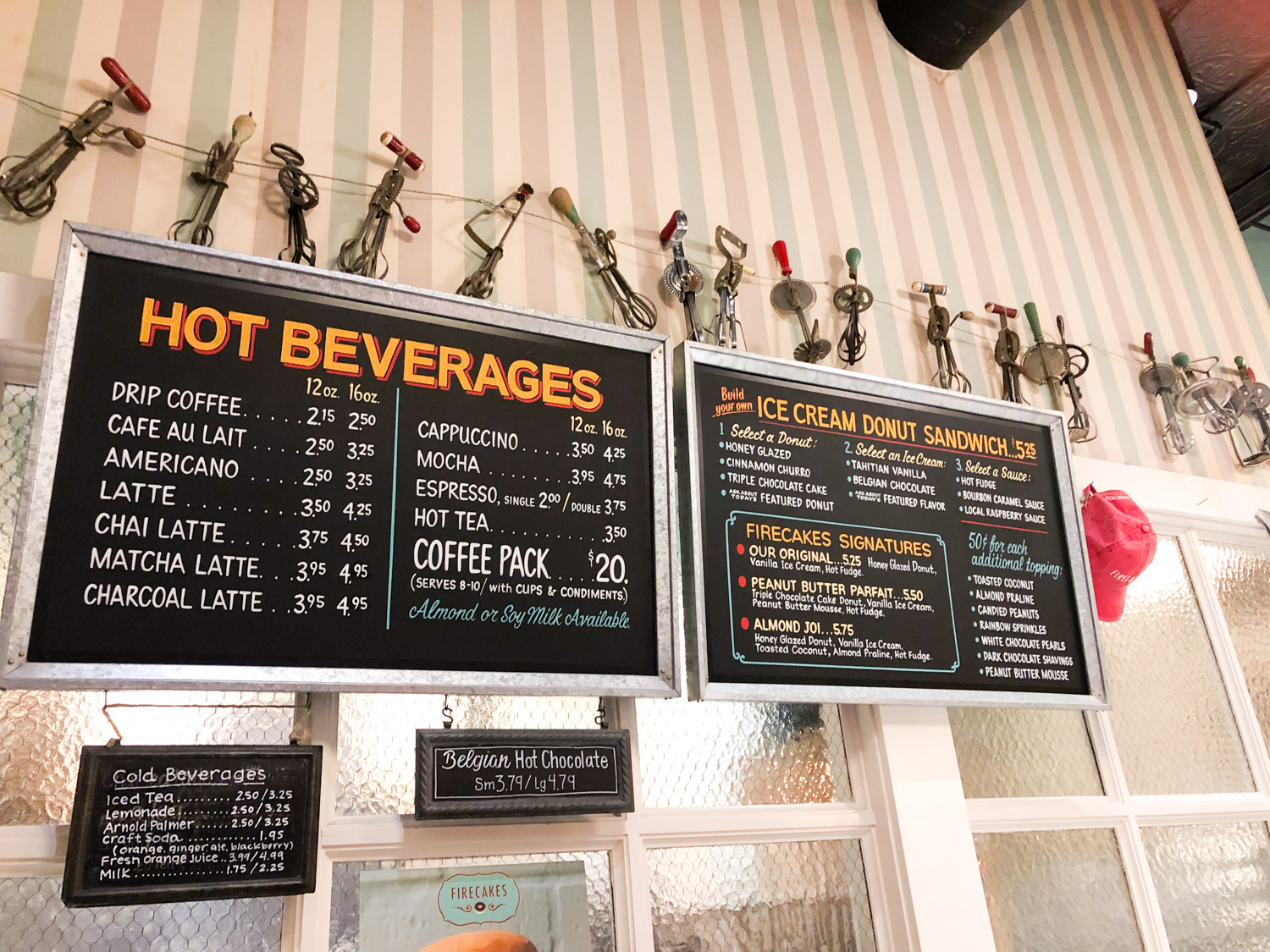 Firecakes: We made a quick stop at the famed Firecakes after dinner at Hampton Social and I wish we were hungry enough to try their classic donut ice cream sandwich! You choose your donut and ice cream flavors and they make it into this little sandwich that looks incredibly delicious. We ended up splitting a Buttermilk Old Fashioned and it lived up to expectations! 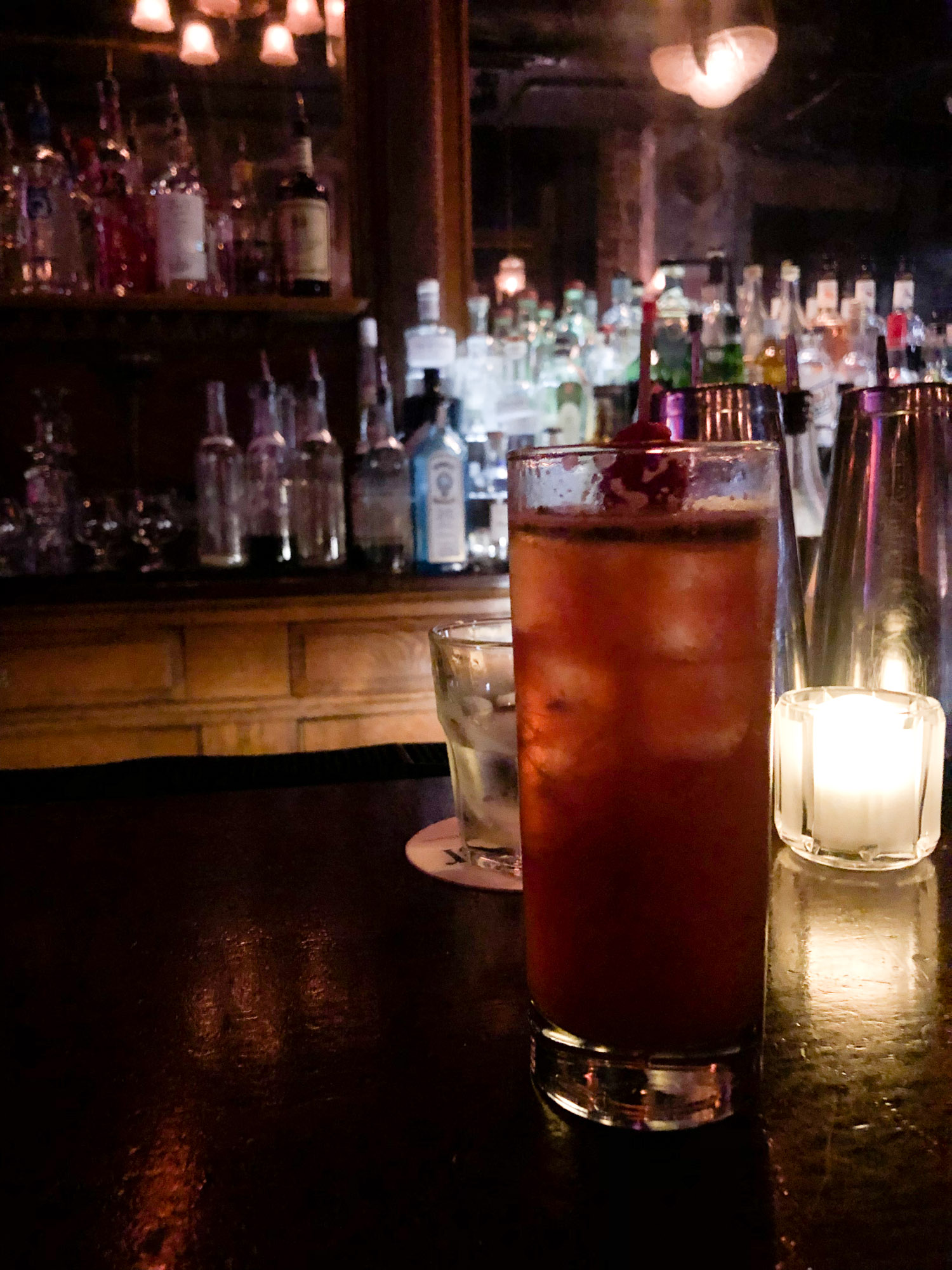 The Drifter: The Drifter is a cozy speakeasy located underneath The Green Door Tavern, which is one of the oldest bars in Chicago. My friend had been a couple of times so she knew it was worth getting there on the early side to avoid a long wait; if there is a wait, they’ll take your name down and text you when it’s your turn. They have a different act every hour or so (it can be anything from burlesque to a magic show to a piano player…there’s a huge range and you don’t know what’s coming ahead of time!) and it’s definitely one of the coolest bars I’ve ever been to!

Pre-Drifter, our original plan was going to be to try this new tiki bar, Three Dots and a Dash (which is literally right around the corner from/in the alley of Firecakes) but we went in and it was PACKED at around 8:45! The space was really cool—I compared it to a nice, upscale, grown up version of Rainforest Cafe because of the theme—but there was literally no space to comfortably sip on a drink because it was so packed and loud. They do serve food and you can make reservations so next time we’d definitely go that route.