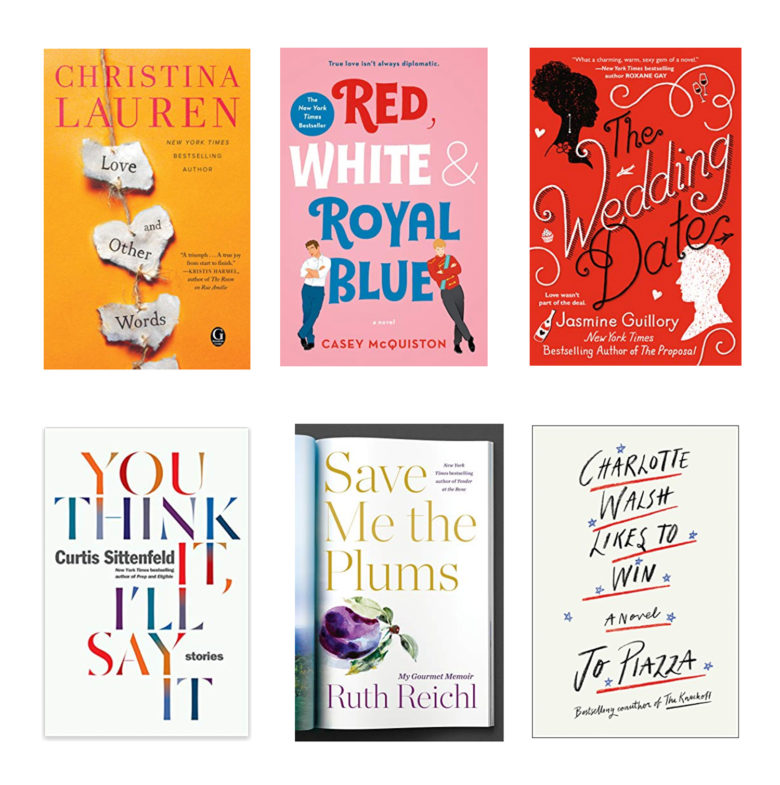 Six more recent reads! This was another good bunch. I’ve been reading a lot of fiction as of late, but finally got in a couple of non-fiction books and let me tell you–they were good ones! Some of these are on an exceptional e-book sale right now if you buy Kindle books on Amazon but otherwise, get buying or go to your library (though the hold times for many of them are really long in the DC Library system, both with digital and print). Happy reading!

I went into this book with zero expectations…I requested it at the library and the hold time was so long, I’d pretty much forgotten about it when it finally became available. Spoiler: it was so good! Elliot and Macy were each other’s first loves and as soon as Elliot reveals his feelings to her, he makes a huge mistake that’s an instant deal breaker for Macy. The book alternates between the past and present–in the past, revealing how the two forged such a close bond over their love for reading, and in the present, as working professionals who had a chance encounter that brought them back into each others’ lives. The book chronicles their reunion–including why Macy went totally silent on him all those years ago. The ending is predicable but the story is incredibly heartwarming! A great lighter read if you want a very well-written, feel-good love story. (Plus, it’s also currently $2.99 on Kindle!)

This is one of the two royals-themed books I’ve seemingly seen promoted everywhere this year and it’s really cute! (The other is American Royals, which I’m reading right now.) American Alex Claremont Diaz is the first son and ends up in a bit of a snafu with his rival, Prince Henry, during a visit to the U.K. The two are forced to publicly make nice, and what starts as an act evolves into a friendship followed by a romantic relationship. Alex and Henry must keep the relationship to themselves–Alex’s mother is running for reelection, and Henry’s grandmother is set on him fulfilling his royal duties. The story is a perfectly done modern literary rom-com and I’d easily pick it up and read it again. Good thing a movie is already in the works!

It took me a little to get into Jasmine Guillory’s writing style (I’ve actually read one more of her books as I’m writing this, so that’ll be in the next roundup…it’s grown on more more since then!) but her books are solid yet predictable chick-lit. Alexa and Drew meet in an elevator and desperate not to attend his ex-girlfriend’s nuptials alone, Drew convinces Alexa to be his wedding. They hit it off and enter a semi-long distance relationship, with Drew flying home to LA and Alexa heading back to Berkeley. It’s nothing groundbreaking, but it’s a fun read if you’re in the mood for something light!

I’m kind of hit or miss with short stories but have loved the two Curtis Sittenfeld books I’ve read (American Wife and Eligible) so gave this a go. Each story is incredibly well-written and substantive without feeling dense–there are strong themes and thorough character development but the stories are easy to read and I finished most of them in one sitting (and short stories don’t often hold my attention like this!). Sittenfeld addresses the awkward thoughts and tough decisions of her characters in an honest, human way…even when the result is cringeworthy. This is a tough one to summarize but I thoroughly enjoyed it! Bonus: It’s crazily $1.99 on Kindle right now!

If you’re a foodie or enjoy reading about the culinary world, pick this up immediately! Ruth Reichl was the Editor in Chief of Gourmet and this book is her account managing one of the biggest food magazines of all time. She is somewhat pushed into the position from her restaurant and food critic and talks about going from having no idea how to manage a team, to revolutionizing the publication into a modern, record-breaking epicurean delight. This was easily one of the best books I’ve read in recent memory and I can’t recommend it enough! It’s a must-read if you’re into food or publishing, but I don’t think you need to be particularly enthusiastic about either to thoroughly enjoy this one.

I thought this was a fun read with a strong female protagonist—it’s sadly unusual to see a book with a woman running for office. Charlotte left a high powered job in Silicon Valley to move back to her home state and run for Senate. Her ruthless opponent is not afraid to play dirty, the press are incredibly hard on her, and her family has a healthy dose of drama that includes her apathetic husband who isn’t acting as much of a support system at the time she needs it most. Whether or not you’re politically inclined, there’s something relatable in here thanks to the character development and themes around being a woman who, simply put, is trying to be everything for everyone. It was a little slow for me at times but the subject matter and Charlotte’s character kept me hooked.