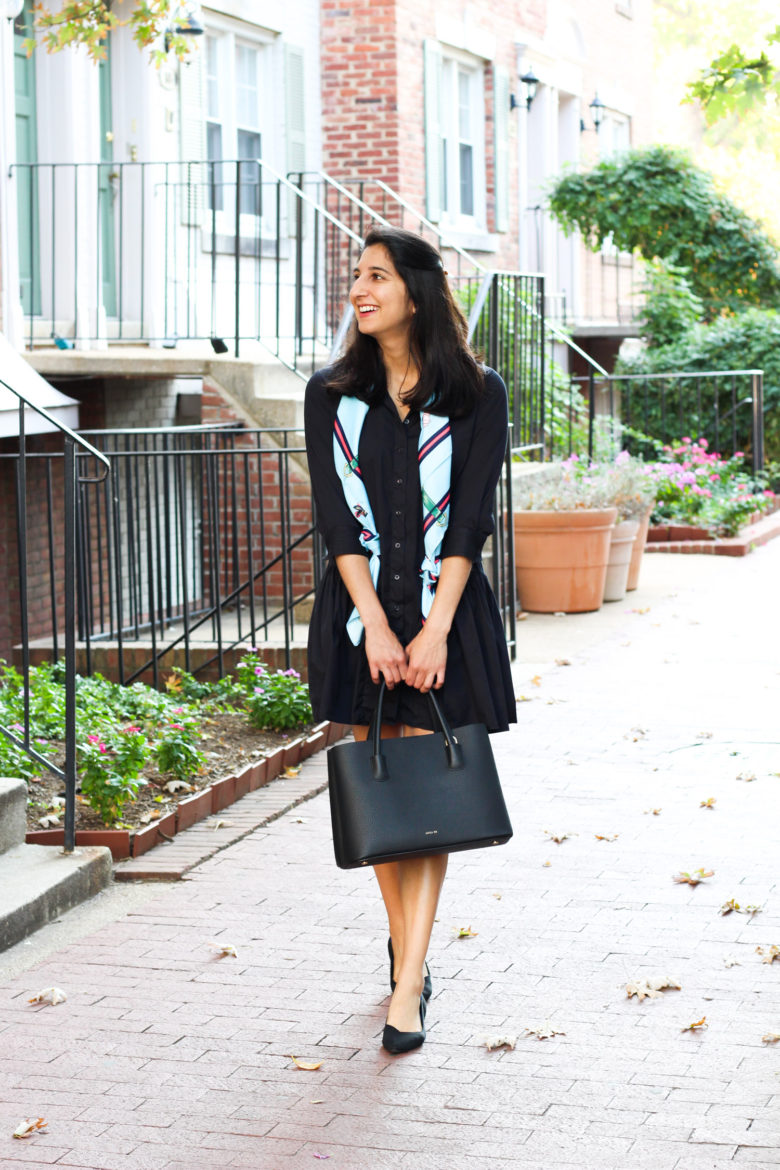 One of the biggest changes in my personal style in the past couple of years has been an increased affinity for neutral, comfortable dresses that can just as easily be dressed up as they can down. I had a handful of sundresses in my early 20s and would attempt to make them “work appropriate” by adding a cardigan and wearing flats to make the hem length look as modest as possible. (This was somewhat passable as a college intern but I probably did it longer than was professionally acceptable…whoops.) Most of them were fit and flare–so fitted up top and swishy on the bottom–and a couple of years ago, I found selling and donating those in favor of more sheath and straight styles. A less fitted style can sometimes be boxy but I find them to be so much more comfortable–particularly on hot days–and simultaneously more “grown up,” in a way. Don’t get me wrong, I still have and love some fit and flare dresses, but have surprised myself in reaching for these straighter silhouettes that I initially thought would be frumpy and shapeless on my figure!

This exact Tuckernuck dress is unfortunately sold out, but they currently have a similar version (plus this, if you want short sleeves) in a few different colors. I was initially hesitant about getting it in black since I’d personally never reach for a black button down shirt and this dress mimics that style. It was on sale, I was desperate for a couple more machine washable dresses, and I loved the cut, so I decided to keep it and am very glad I did! I’ve worn it several times since getting it in late May–to work, brunch, dinner, while traveling, and to my cousin’s rehearsal dinner. It’s a great blank canvas for styling up or down, but my favorite way to wear it has been with a bright scarf. Tuckernuck has their own line of scarves that look way more expensive than they actually are, and I love that they’re oversized and therefore can be styled in so many ways. I got this pattern on sale when I ordered the dress so it’s no longer available, but there have a bunch more (also linked at the end of this post) in some warmer hues that would be perfect for this time of year. 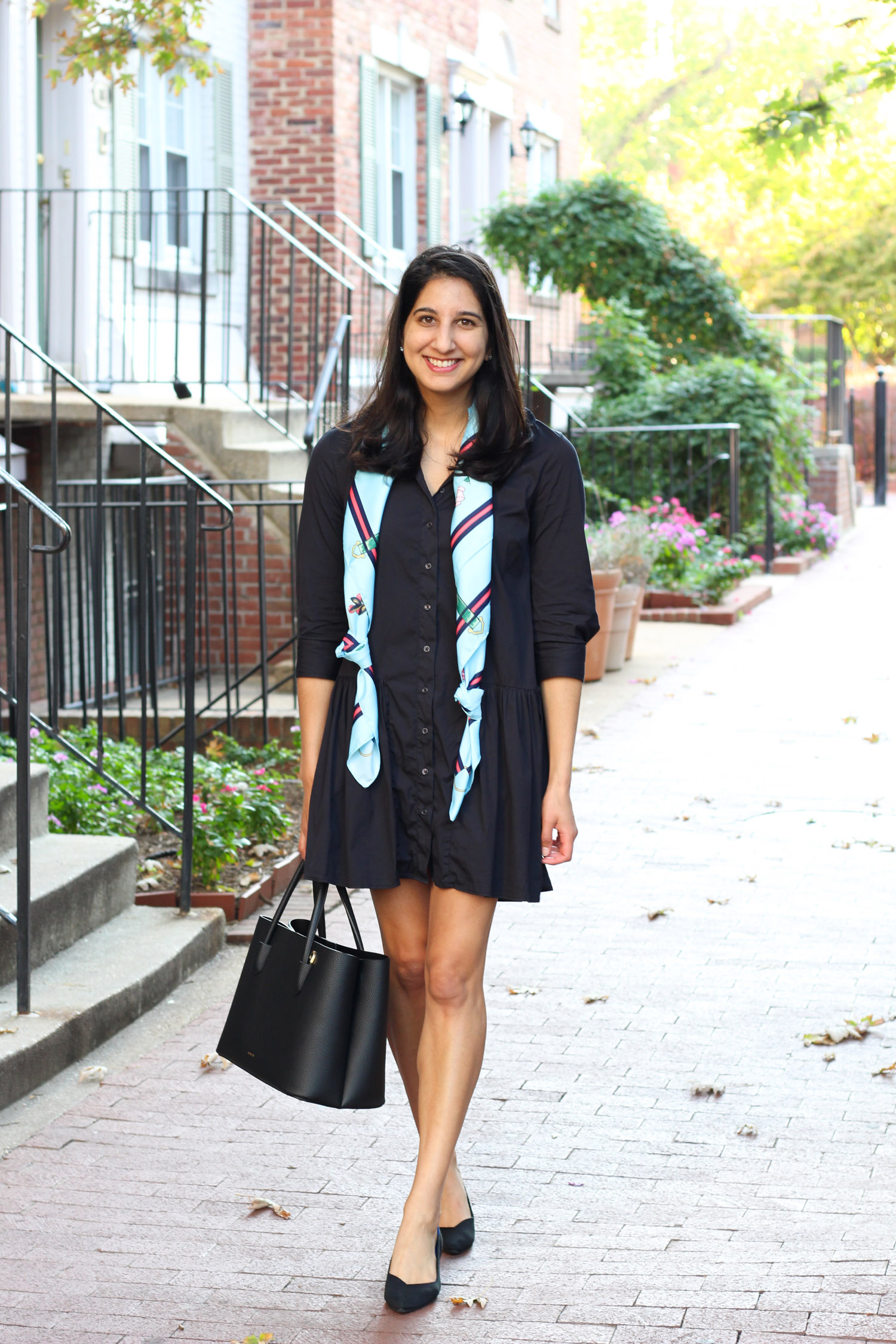 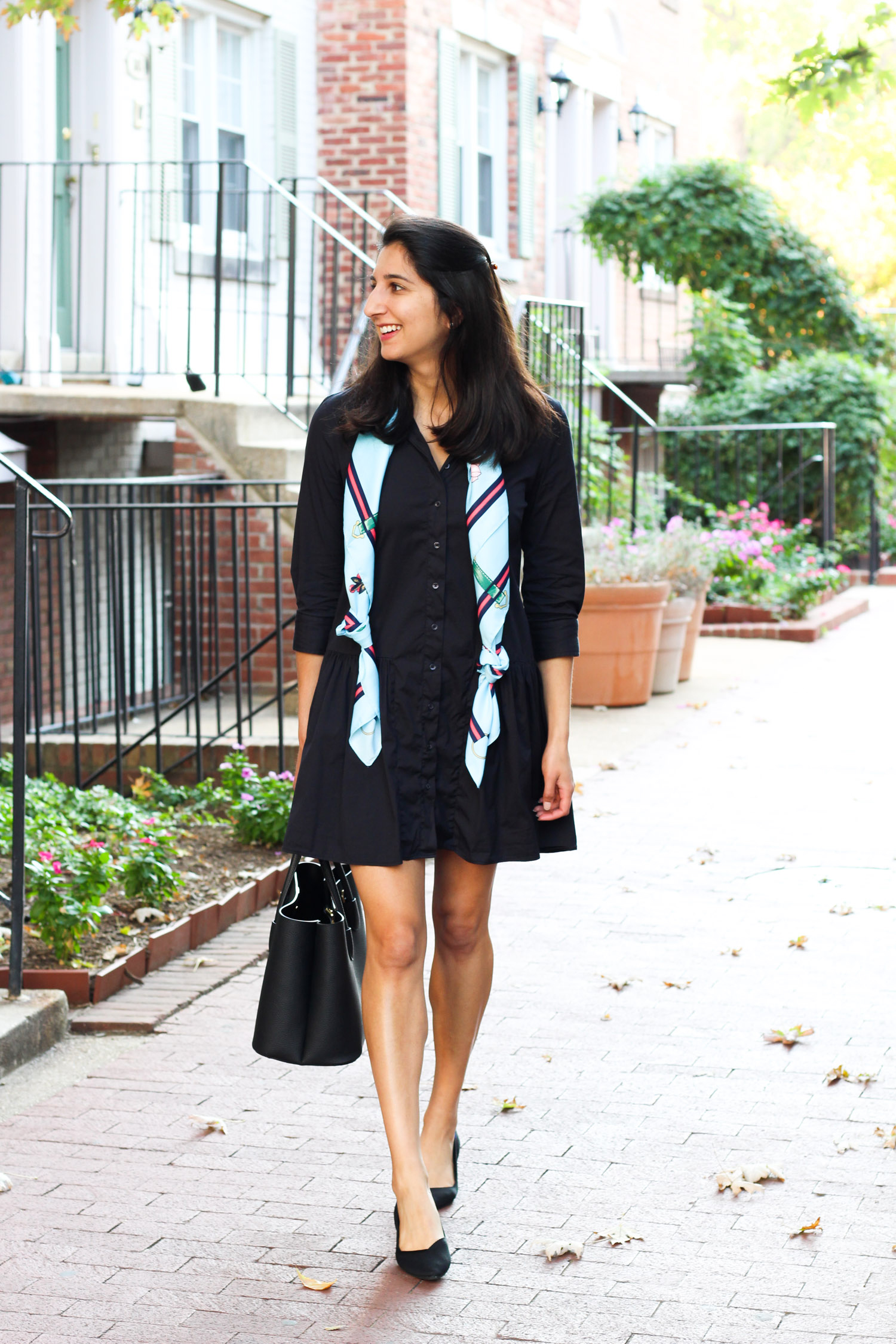 Also, a quick note about my flats–you’ll be seeing them in several future posts (especially when I do my daily outfit roundups), but they’re the pointed toe Rothy’s and one of the best purchases I’ve ever made! They’re machine washable and made with recycled materials, so stand up incredibly well in the rain, if your feet sweat, and through spills. Given that they don’t have any kind of arch support, I was pleasantly surprised to find that they’re really comfortable and while I personally don’t walk more than 3-4 miles in them in one day, know many who don’t have arch issues and can wear them for miles on end.

Tuckernuck dress (wearing a M; similar)
Tuckernuck scarf (similar, plus more linked below)
Rothy’s flats (if in between, go up a half size)
Angela Roi bag via Plan de Ville 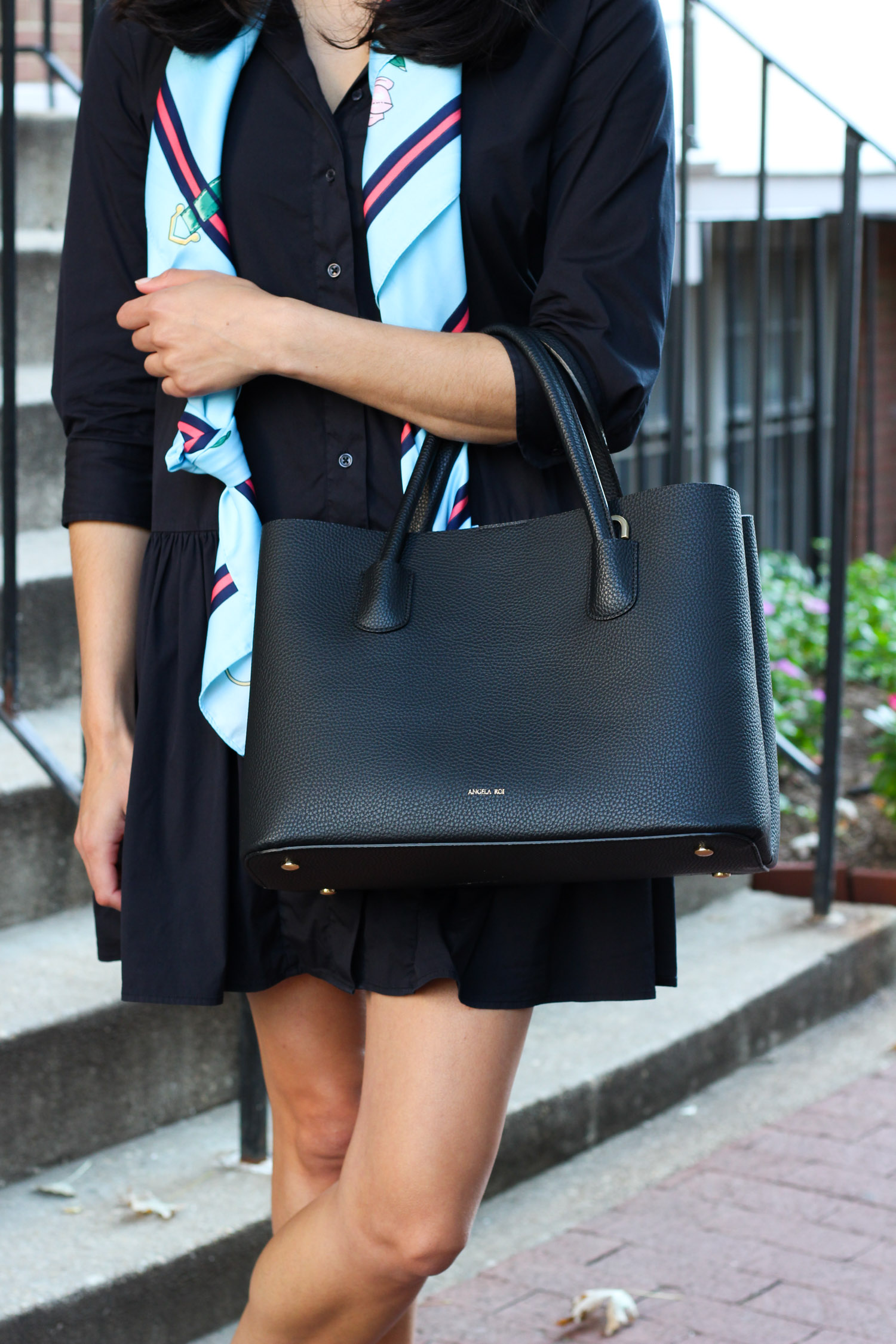 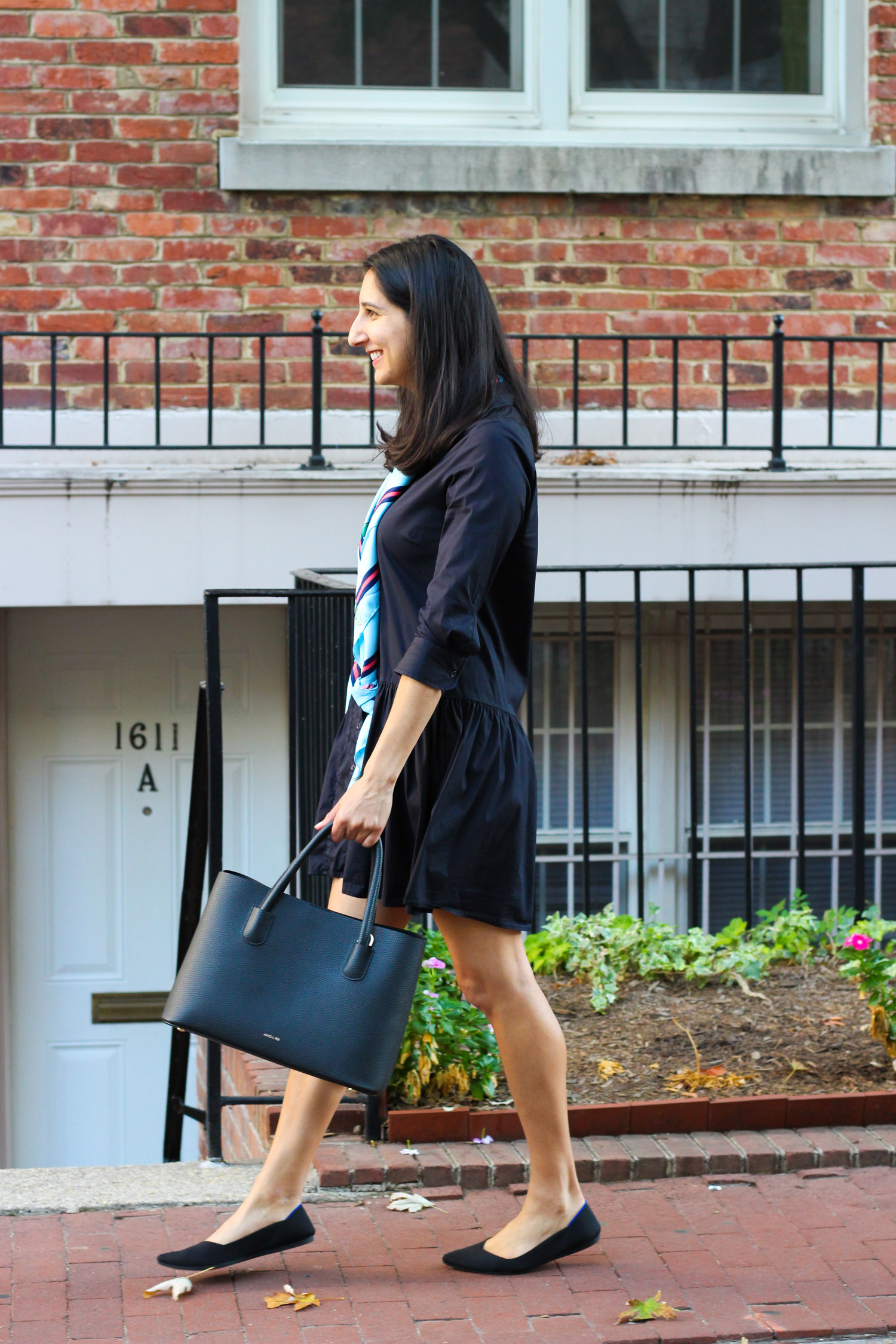