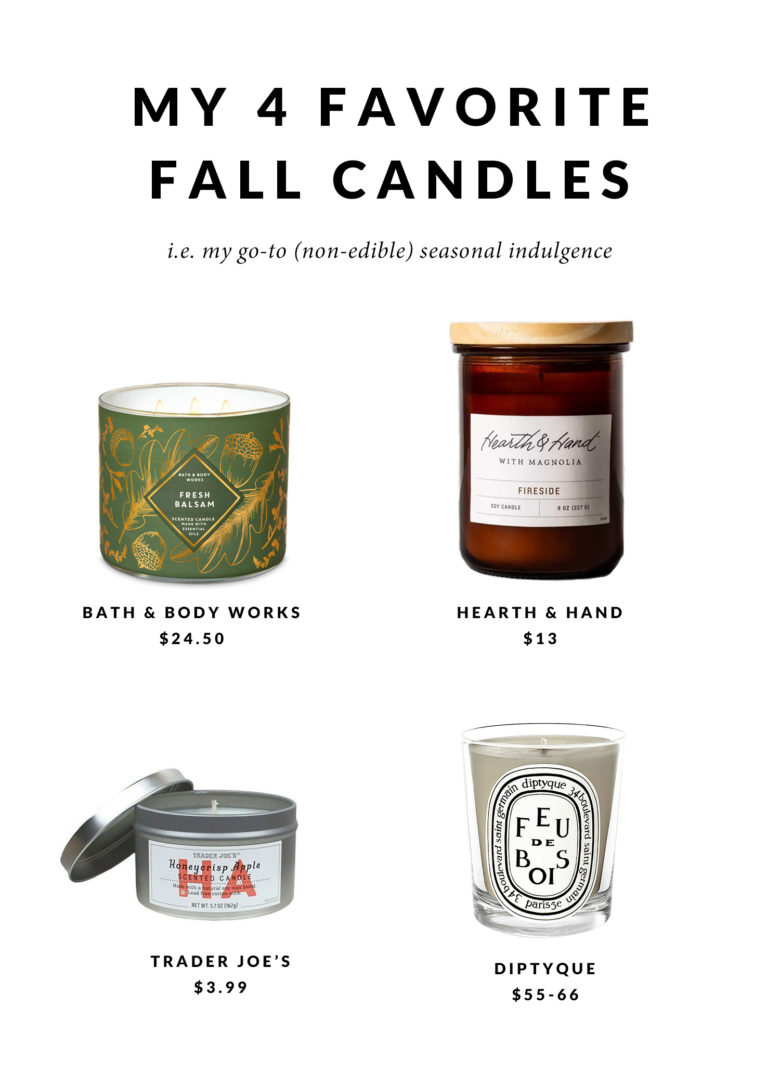 Fall candle roundups are a dime a dozen these days, but I’ve found that most don’t include personally tried and true favorites, which is unfortunate because a “bad” candle (one that smells bad or burns too quickly for the price) is such a disappointment, especially if you’re giving it as a gift–which I’m sure many of you do, too! I was going to do a more robust seasonal roundup but then realized there are just four I could personally stand behind. Thankfully, they hit all budgets!

I’d heard great things about Magnolia’s candles so picked this one up when we were at Target back in Dallas last month. It’s amazing and I’d highly recommend–the profile is small and slim but the throw is great. I also really like the label design and that it’s nondescript in our little living room! The line also includes several other sizes and scents.

Apologies to those of you who don’t live near a Trader Joe’s but I had to include this one because their candles are one of my favorite seasonal buys every year! They’re not the most long-lasting, but they do smell great, have a strong throw, and clock in at just $3.99. This year’s Honeycrisp Apple was a great scent to kick off fall and I can’t wait to see what else they’re going to come out with this season! Fingers crossed for some kind of fir or woodsy variety.

Splurging on expensive candles is not something I really do, but the one time I did indulge was three years ago during the Nordstrom Anniversary Sale when they had a box of five mini Diptyque candles. I wanted to see what the hype was about and it turns out they’re definitely worthy of the praise if you’re looking for something over the top. My favorite was hands down Feu de Bois…it’s basically an upscale woodsy scent and is wonderful. It’s not something I’d buy myself just because but if it was majorly marked down or I was buying someone a real treat, this would be it.

Leave your favorite seasonal candle rec below–especially the budget-friendly ones!