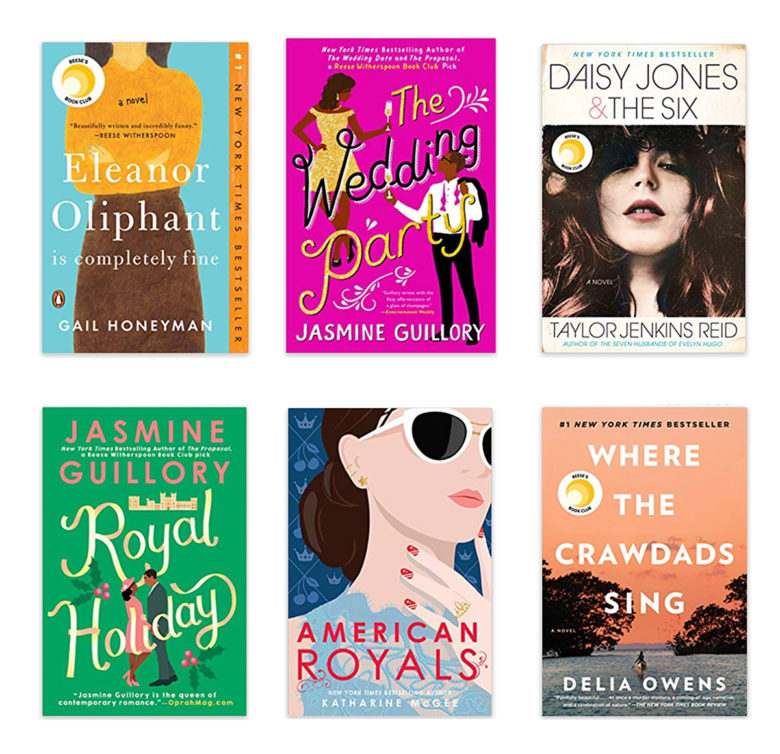 I feel like I say this a lot, but this batch of books was really good! The odds favored that to be the case because four out of the six came very highly recommended (through podcasts, friends, bloggers…several places, really) and I’m happy to say they all lived up to expectations. One of my favorite parts of the holiday season is having more time to read–I often end up tearing through books faster in that window–so if you’re trying to queue up a few good reads before the end of the year, I’d recommend any and all of these!

Eleanor Oliphant, a quirky loner who’s spent most of her life closed off from others and wrapped up in her meticulous routine, finds a friend in her colleague, Raymond, and the two form a bond after helping an elderly gentleman who had a dangerous fall right in front of them. Eleanor and Raymond are practically polar opposites but develop a friendship that leads Eleanor to move on from her troubled past and discover a new side of herself.

I loved this book…it’s unlike anything I’ve ever read, and I love how quickly you become invested in Eleanor’s character. Her troubled life is disturbing at times but there are glimmers of hope from the start that left me feeling optimistic for what’s to come. The ending certainly delivered! This book makes you happy and sad at the same time and no details are overlooked–both signs of a great read.

This is the sequel to The Wedding Date and while reading that ahead of time isn’t totally necessary to appreciate the plot line here, I would recommend picking them up in order if you can. (The Proposal comes before The Wedding Date, if you really want to hit the trio, and Royal Holiday–discussed below–is what follows!) Alexa is getting married and her best friends, Theo and Maddie, have never liked one another. But in the midst of sharing bridal party responsibilities and after an accidental night together, the pair find themselves in a pickle and must tiptoe around Alexa while also personally denying there’s nothing going on between them.

A fun, quick read–it felt a little redundant following the first two books in the series but had my attention from the start because I was already invested in the characters! I also think it lost half a star because the fourth book in the series was just so good (more on that below).

It’s the late 1960s and Daisy Jones is a teenager in LA, sucked into the sex and drugs of the rock star world and dreaming of her own future in rock ‘n roll. After being noticed by The Six, the band’s lead–Billy–and Daisy end up being the perfect musical combination needed to put the band on the map. This oral history chronicles the highs and lows of The Six, Daisy, Billy, and the most important people in their lives.

The plot of this book didn’t appeal to me at all but it seemed to get universally positive reviews so I put myself on the library’s Kindle waitlist. I think I waited for two months and while I wasn’t immediately sucked in, this book got me good despite the slow start! Similar to Eleanor Oliphant, it’s unlike anything I’ve read before and has incredible character development.

When Maddie’s presence is requested at the royal family’s estate over Christmas, she knows the best way to make the most of this opportunity of a lifetime is to bring along her mom, Vivian. The two arrive across the pond and while Maddie’s hard at work outfitting the duchess for the holidays, her mom keeps busy by exploring know the grounds and getting to know Malcom, who has spent year working for the Queen. It quickly becomes apparent that Malcom and Vivian have a special connection, and the week plays out a little differently than both Maddie and her mom expected!

This was my favorite Jasmine Guillory book! It’s not so subtly modeled after Megan and Harry and Sandringham so if you’re a sucker for a royal romance, this will be very up your alley! This is the perfect time of year to read it, too.

Princess Beatrice and Princess Samantha are two members of the American royal family (the Washingtons) and as Beatrice gets closer to stepping into her role as queen, the princesses both face their own set of struggles–Samantha falls for the one guy who is fully off-limits, and Beatrice starts to do the same while also trying to come to terms with her impending new role. It’s your classic royal family dynamic with the heir and the spare and how each navigates their position in the family and to the world.

This book got a lot of hype ahead of its release date and while I’m a huge fan of novels about the royal family, was skeptical that it would live up to expectations. Spoiler: it does! If you’re a fan, this is a must-read. I love, loved this book and am so excited for the sequel (which I believe comes out next fall)…this one ends on a big of a cliffhanger and I haven’t read a book like that lately.

Where the Crawdads Sing – Rating 5/5

Set in the 1960s, Where the Crawdads Sing chronicles the life of Kya, known as the “Marsh Girl” in her small North Carolina town. After a rough upbringing, Kya builds a life for herself and matures into a whip smart, sensitive young woman. With the help of one friend, she teaches herself how to read and goes on to become a published author–all while living as an outcast. When news of a murder hits the town, Kya finds herself in trouble with the law and must be part of a world that’s turned a blind eye on her for her entire life.

Apparently this is a theme… I wasn’t sure I’d like this book based on the plot summary. I’m definitely not doing it justice here either but read.this.book! Trust me: It’s one of the best ones I picked up this year.