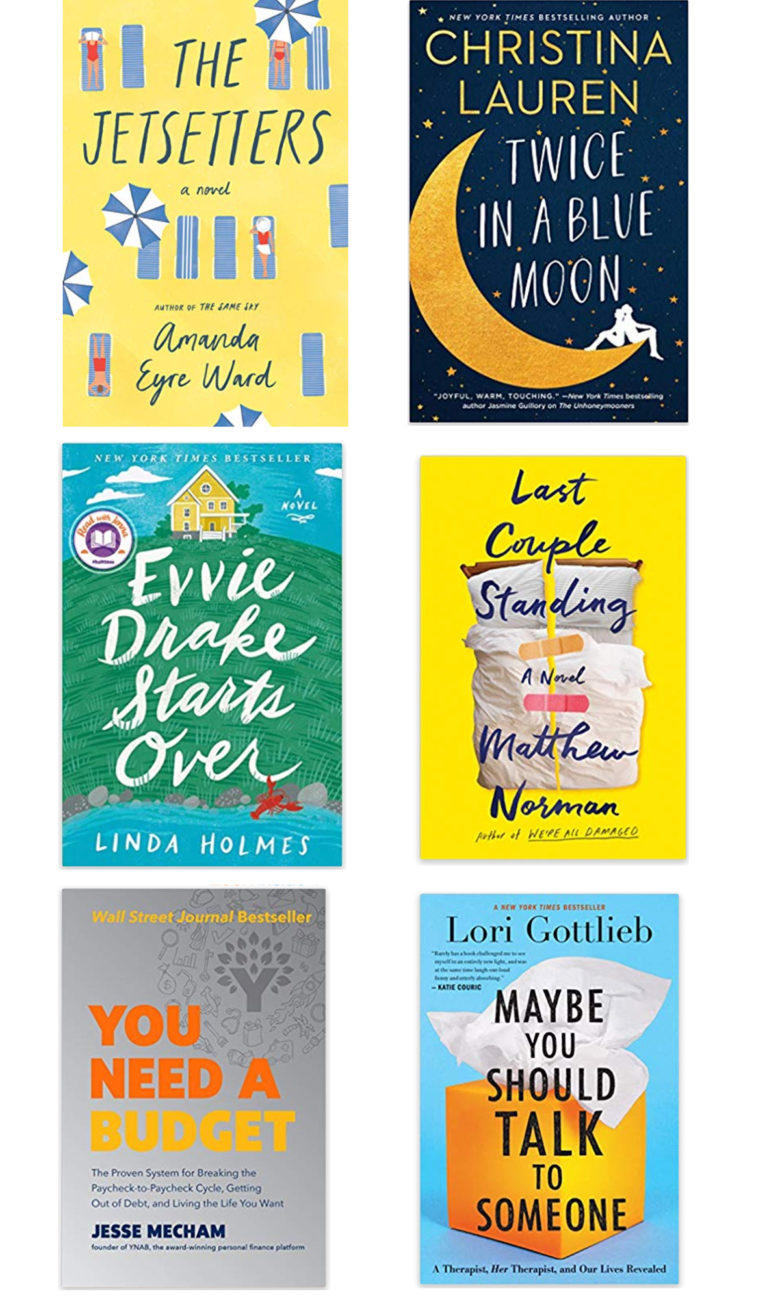 TGIF! If you’re looking to dive into some new books this weekend, I’m here to help! This batch was a mixed bag of really good and a little meh…I actually read a couple of them towards the end of last year but somehow left them off this post!

(Releasing March 3, 2020) When Charlotte enters the “Become a Jetsetter” contest and wins a 10-day cruise for her family, she’s convinced it’s going to be what “fixes” them. She hopes they can get back to how they were years ago but they’ve been estranged and occupied with their own lives as a venture capitalist, harried mother, and C-list actress. Being on the ship together presents a number of challenges and the family is forced to deal with them in close quarters, while abroad–which proves to be next to impossible.

I liked the idea of this book but the characters annoyed me! They were all really whiney in different ways and made so much of the story feel so…negative? The storyline moved along quickly but I just found myself hoping their personalities would turn around because they honestly just sounded so terrible to be around. Not sure I’d recommend this one!

Tate and her grandmother are vacationing in London when she meets Sam. The two practically fall in love at first sight and their relationship evolves quickly, but things suddenly unravel before the trip even ends. Tate, the long lost daughter of one of the world’s biggest movie stars, poured her heart open to Sam so when news suddenly breaks that Tate Jones is actually Tate Butler–Ian Butler’s child–Tate knows Sam must have tipped off the press and everything she felt with her first love comes crashing down. 14 years later, Sam and Tate’s paths cross again–this time on a movie set where Tate, an up-and-coming actress, has the lead part of a film whose script Sam just happened to write. They’re tasked with navigating their past in a totally different setting–as adults–and the feelings from their past–both good and bad–come rushing back.

This is such a cute read! I tore through it in about four days over the holiday “break” and would recommend it if you’re in the mood for a love story. It’s pretty predictable but very well-written…I think it’d make a great movie!

After Evie’s husband unexpectedly passes away, she’s left living in a massive house in small town Maine where everyone knows about her life and loss. When her best friend Andy mentions Dean–a NYC-based former MLB pitcher suffering from a hinderance that prevents him from playing the game–and his need to escape city life, Evie lets Dean move into the apartment behind her house. Despite setting ground rules to avoid talking about their pasts, the two quickly strike up a deep friendship…that unsurprisingly starts to turn into something more!

I’m not sure exactly what it was, but I really, really enjoyed this book. I think it was the character development–both Evie and Dean’s personalities have so much depth and just feel so….real? I also loved the contrast between their stories and how they still found so many ways to connect and support each other despite having gone through such different hardships. Would 100% recommend if you’re in the mood for a cute love story!

(Releasing March 17, 2020) The “Core Four” is made up of four men and four women who happen to make up four couples. They’ve known each other since college and “grown up” together–getting married and having kids around the same time, but now also starting to divorce around the same time. Mitch and Jessica, the “last couple standing,” decide to try something radical and intentionally go break some cardinal rules of marriage to see if the adjustments can help keep the spark alive. They’re balancing their kids lives and their friendships all while turning their personal lives upside down, which plays out exactly how you’d expect!

This book wasn’t bad but it wasn’t my favorite…it was kind of painful to watch all these marriages dissolve! I’m sure it didn’t help that I read this soon after we got engaged but it was just kind of depressing. It was an easy read but the plot just didn’t do it for me!

Maybe You Should Talk to Someone – Rating: 5/5

Lori Gottlieb is an LA-based therapist who finds herself looking for her own therapist after her personal life unexpectedly erupts. When someone in her professional network introduces her to Wendell, Lori is initially skeptical but figures he’s her best bet in working out what she believes are minor things that can be addressed quickly. In addition to chronicling her [not so brief] time with Wendell, Lori dives into the her own clients’ lives and how her background helps her relationship with patients including the newlywed recently diagnosed with cancer, arrogant television producer, and twenty-something making questionable dating choices.

I adored this book! I’d heard only great things and loved how she tackled what’s often such a sensitive subject matter with such humor and openness. Everything is so candid and Lori addresses so many topics in such an accessible, human way. I’d recommend this book to anyone–it completely breaks down any stigmas about therapy and left me with so many takeaways!

You Need A Budget is a budgeting app (shocking, right?) and this is the accompanying book! J and I have been dabbling with the app for the past year and couldn’t seem to get the hang of it, so I picked this up in an attempt to learn more about the philosophy and why things are set up how they are. We still need to plug in some numbers (and start from scratch, honestly) but if you’ve considered the app for yourself, this book sheds some light on how the whole thing works! The tone wasn’t my favorite at times and there’s a lot of “obvious” information in there if you’re already relatively financially savvy, but it was an easy, quick read that was motivating.

* Thank you to Random House for sending me these advance reader copies!