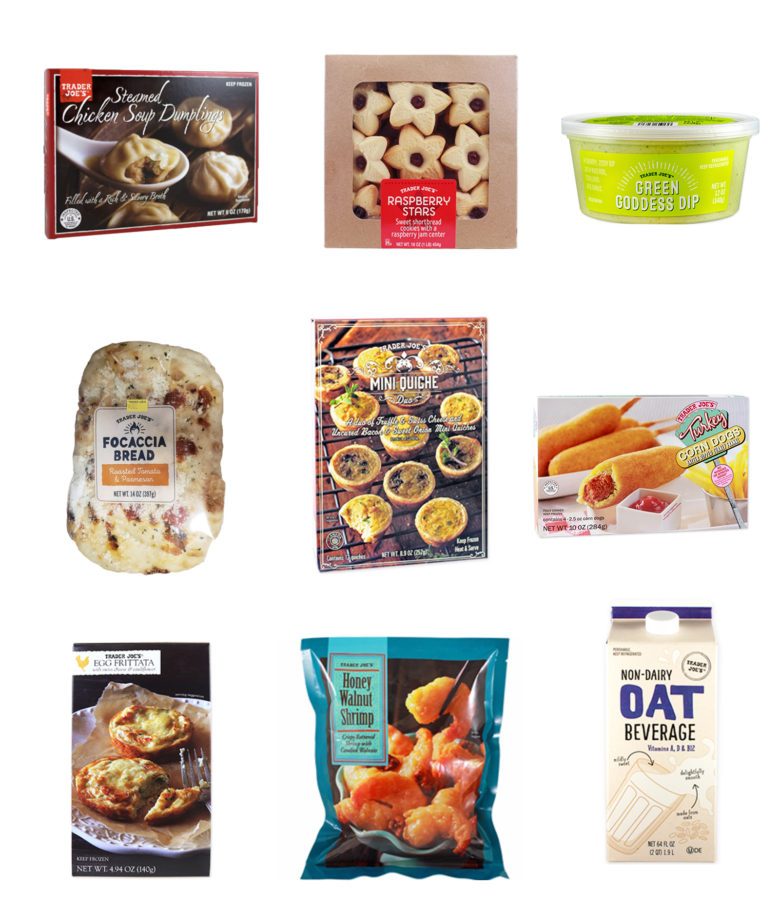 It’s been a few months since my last Trader Joe’s roundup but if you follow me on Instagram, you’ve surely seen that I’m still very much buying + trying new things and my love for the brand is holding strong. I’d venture to say that this is batch is one of my favorites…we buy most of these things on a regular basis and they’ve become staples in our house!

CHICKEN SOUP DUMPLINGS // I am obsessed with these. Obsessed! They’re one of the best things I’ve ever purchased from TJ’s and whenever they’re in stock at our location (which isn’t consistently), I legitimately buy four boxes. (We’ve even called to put some on hold when we knew a shipment was coming in…no shame.) The whole box of six is under 250 calories so I’ll have them as a hearty snack or pair them with rice and veggies for a full meal. If you like soup dumplings or Asian food–run, don’t walk!

RASPBERRY STAR COOKIES // My friend Rosa raves about these cookies and we finally gave them a shot over the holidays…ohhh my gosh. They’re hands down one of the best baked goods to ever come out of TJ’s and it took a lot of self control not to buy a box every week (we finished them so quickly!). Bonus points: they freeze well! The star variety may be seasonal to the holidays but I’ve seen similar versions since. If you can’t find those, the round jelly-filled shortbread cookies are a year-round item and are almost equally as good!

GREEN GODDESS DIP // A yummy garlic avocado dip that we’ve been pairing with baby bell peppers. TJ’s makes so many good dips and most of them aren’t the best nutritionally, so I was happy to see another appealing lighter option! This would be great on sandwiches, paired with a protein, or on a salad, too.

FOCACCIA BREAD // Low quality photo, high quality food! I’ve always been pretty impressed with TJ’s fresh bread selection but only recently tried their focaccia. It’s a great alternative to French, sourdough, or ficelle…we’ve been having it with pasta, but I’m tempted to use our current leftovers for homemade pizza.

MINI QUICHE DUO // I’m a big quiche person and love having these mini quiches on hand for a snack or meal pairing. I think they may have been holiday-specific but I’m also pretty sure I saw them in January! Fingers crossed there’s something like it year-round but as a backup, Whole Foods makes something similar–equally delicious but not obviously not equally priced!

TURKEY CORN DOGS // I’ve seen these corn dogs in the frozen section forever–years, maybe?–and resisted since the entire frozen section is basically my kryptonite. But J loves corn dogs so we finally picked them up a few weeks ago and they’re unsurprisingly pretty good! While the breading can get a little mushy in the microwave (definitely don’t overcook them!), they’re a great snack option + meal accessory!

EGG FRITATTA // An easy on-the-go breakfast…I find them to be a little plain on their own (I think part of it comes from being iffy on microwavable egg texture) but was impressed with this protein-packed frozen breakfast option! I really want to try them as a “patty” in a breakfast sandwich and wish the price was a little lower, but if you’re guilty of buying breakfast out every morning and don’t want to prep something ahead of time, this is a great option to have on hand!

HONEY WALNUT SHRIMP // According to the TJ’s site, this has been around for years but I only discovered it a couple months ago and we’ve had a bag in our freezer almost consistently ever since! We make a lot of rice + veggie + random protein bowls during the week and I love that this includes a sauce–even though it is on the sweeter side! A quick tip: Spray the pan…these stick in the oven.

OAT MILK // We usually buy unsweetened almond milk but have been giving oat milk a shot to change things up…I really love it! The consistency is thinner and it just…smoother? This is a terrible description but if you’re in the market for non-dairy milk alternatives, I’d highly recommend giving oat milk a try.