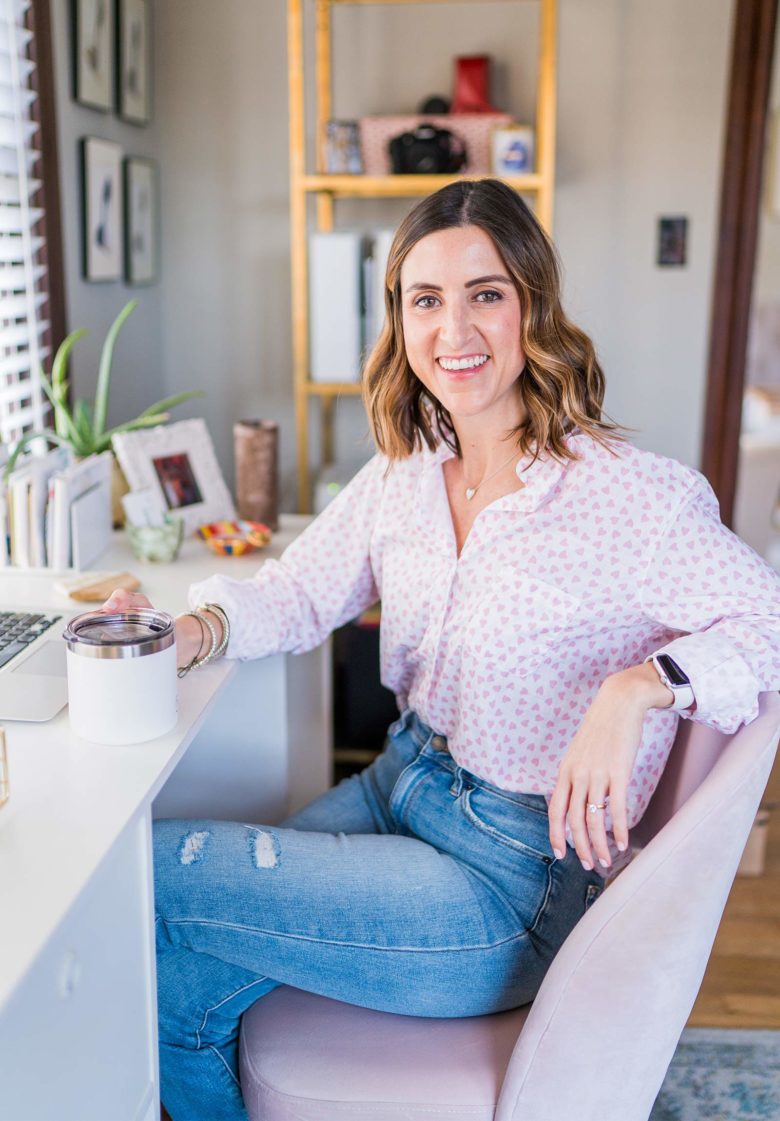 I’ve said it before and I’ll say it again…I’ve met some incredibly talented women over the years, and love when I have an excuse to spread the word about their work and talents! Today’s A Quick Chat With… is with Ashlee Hightower, a former DC resident who now lives Houston where she’s both a lifestyle blogger and attorney for her own biz, Contracts for Creatives. Ashlee and I became friends over four years ago (we literally went on a blind “date”!) and it’s been amazing watching her build her brands since we’ve known each other. Ashlee’s academic and personal backgrounds are fascinating (any time they come up, I joke about them being in her “past life” since her path is so interesting–you’ll see what I mean with the mention of medical school) and she’s been both an incredible friend personally and attorney professionally!

P.S. Before we get started, I’ll point you to this post–it’s a couple years old, but Ashlee is my go-to for all blog and freelance business-related legal matters and I can’t recommend her more highly if you’re looking for an attorney who knows small businesses inside and out!

When did you start your business and how did you first get it off the ground?

I launched Cobalt Chronicles in July 2015. I had recently moved to Washington, DC from Birmingham, AL and transitioned from a practicing attorney to a more corporate legal role at Bloomberg. My hours were very traditional, 9-5, and my job was a lot less demanding than my law firm days. With the extra time on my hands and with a new city at my fingertips, I decided to launch my own personal lifestyle blog. In the beginning, I wrote about everything. Restaurant reviews, neighborhood hot spots, my favorite pieces of clothing, trips I was taking … anything really! Over the last 5 years, the content has shifted, and I mainly focus on style, travel, and wellness with a little bit of home content sprinkled in.

What did you do before starting Contracts for Creatives?

After graduating law school in 2011, I practiced law as a litigator in the financial services group at a large, national law firm for 3+ years and I dabbled in the intellectual property group as well. After a couple of years, I knew I didn’t want to be a partner at a large law firm. The hours were grueling and the work simply wasn’t my cup of tea. I made the leap to the corporate world where I worked as a legal editor at Bloomberg News for 4+ years. For roughly two years, I was juggling my full-time job at Bloomberg along with Cobalt Chronicles and Contracts for Creatives. I left Bloomberg in May 2018 to pursue my own businesses full time. 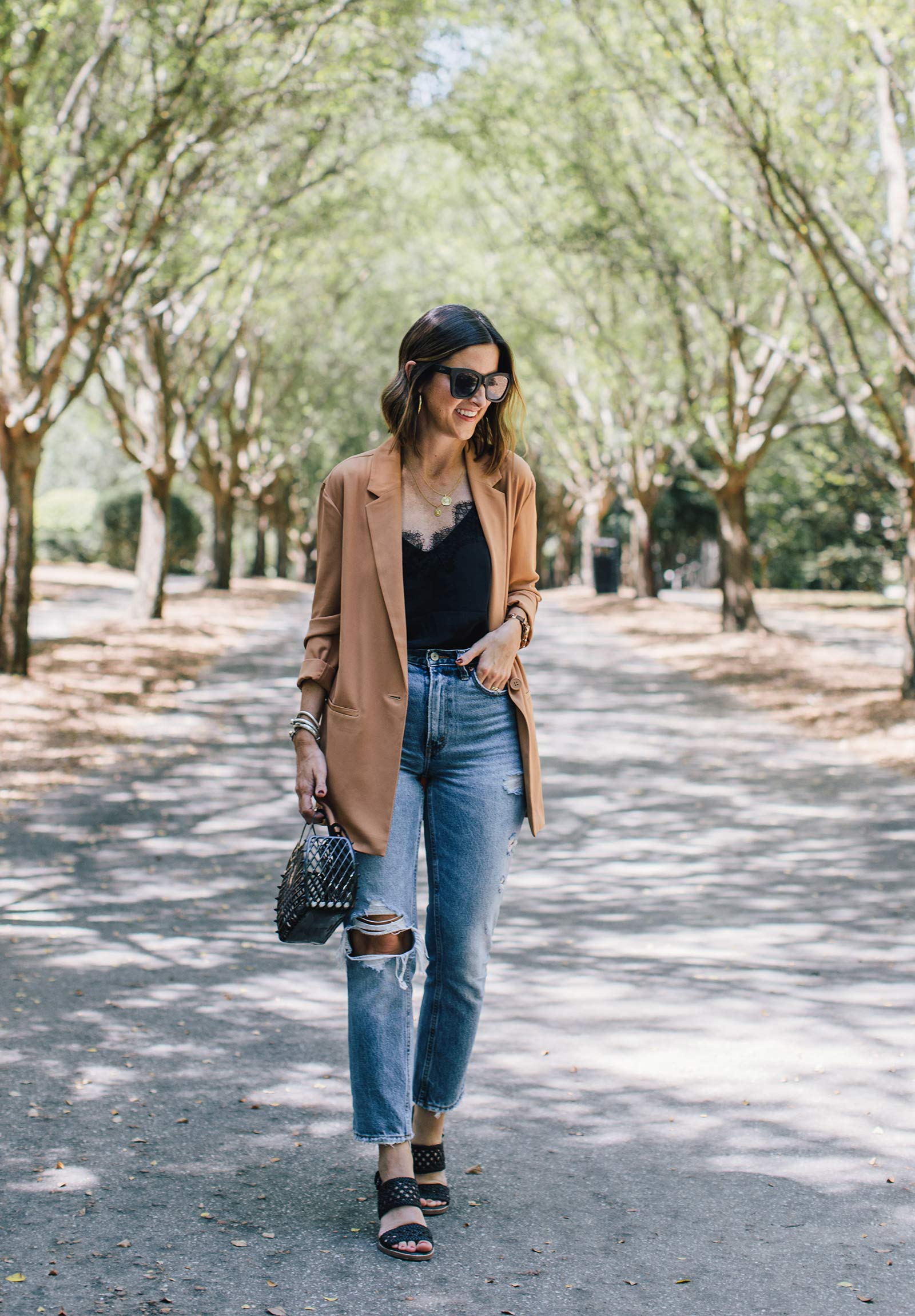 You have such an interesting academic background, where you considered both medicine and law as career paths. Can you speak to how you ended up where you did?

Sure! Growing up, I thought medicine was my for-sure path. I majored in biology in college at Ole Miss, took the MCAT, and was dedicated to doing whatever it took to get into medical school. Upon my first round of applications, I was waitlisted. So upon the advice of med school facilitators and doctors at the two medical schools I was focused on, I enrolled in graduate school immediately after graduating from college. I attended LSU for two semesters, pursuing a graduate degree in biology. During that time, I had somewhat of a change of heart. At LSU, I had time to really think about the direction I wanted to take. Most of my friends had graduated and left Baton Rouge, and I was really focused on school. With not many distractions, I was able to think long and hard. I’d always excelled in english and writing classes. I decided that I not only wanted to apply to medical school again, but that I also wanted to sit for the LSAT and potentially apply to law school too–just to see. I ended up doing well on the LSAT. And so I applied to both medical school and law school. When the time came to make my decision on which path I wanted to pursue, I already knew I’d be heading to law school in the fall. All in all, I graduated from Ole Miss and had one year before starting law school where I attended graduate school at LSU during both summer terms and the fall semester. I worked as a waitress during the spring and summer before moving to Birmingham for law school. My biology degree wasn’t a total waste…in law school I discovered that if you have a hard science undergraduate degree, you’re eligible to sit for the Patent Bar Exam, a separate bar exam that, if passed, allows you to become a registered patent attorney. So I did just that! I still hold my active patent attorney license to this day!

You’re originally from Louisiana but have lived in a few different states over the past few years! Why DC, and then Houston?

I grew up in Shreveport, Louisiana, attended law school at Ole Miss in Oxford, Mississippi, had a brief stint in Baton Rouge for graduate school, and then moved to Birmingham, Alabama for law school. I lived in Birmingham for six years, three years of law school and three years of practicing law. I met my now husband, Michael, in Birmingham. He had moved to Birmingham after graduating from LSU. We had both been in Birmingham for a while and wanted to experience life in a bigger city. At the time, I was traveling to Richmond, Virginia a lot for my law firm job, almost weekly. My firm had an office in DC, and I had friends in DC too. Some weeks, it made more sense to catch a ride from Richmond to DC for the weekend when I had to be back in Richmond on Monday than to fly all the way back to Birmingham. Once I spent a couple of weekends in DC, I knew it was at the top of my list of places I wanted to live. Michael and I toyed around with San Francisco, New York, and Chicago too. We ultimately landed on DC as it just felt right. I love that DC is a big city while still having such a sense of community among the people that live there. I love the neighborhoods, and I really enjoy the fact that there aren’t skyscrapers. It makes the city feel much more manageable than say, NYC or Chicago. Michael and I lived in DC for five years. It treated us so well!

While I miss DC terribly, the big city life had started to wear on Michael and I. Everything is expensive, it takes extra effort to run small errands, the weather isn’t ideal for my liking, and we wanted more space. We were toying around with the idea of moving back to the south when Michael had a job opportunity to make a move to Houston. We took it! We’ve been in Houston for a little over a year now. While I don’t think Houston is our forever home, I’m happy to be here right now. We’re really close to both of our families in Louisiana, it’s affordable, we have lots of living space, and there are still perks of big-city living like amazing restaurants and SoulCycle! 😉 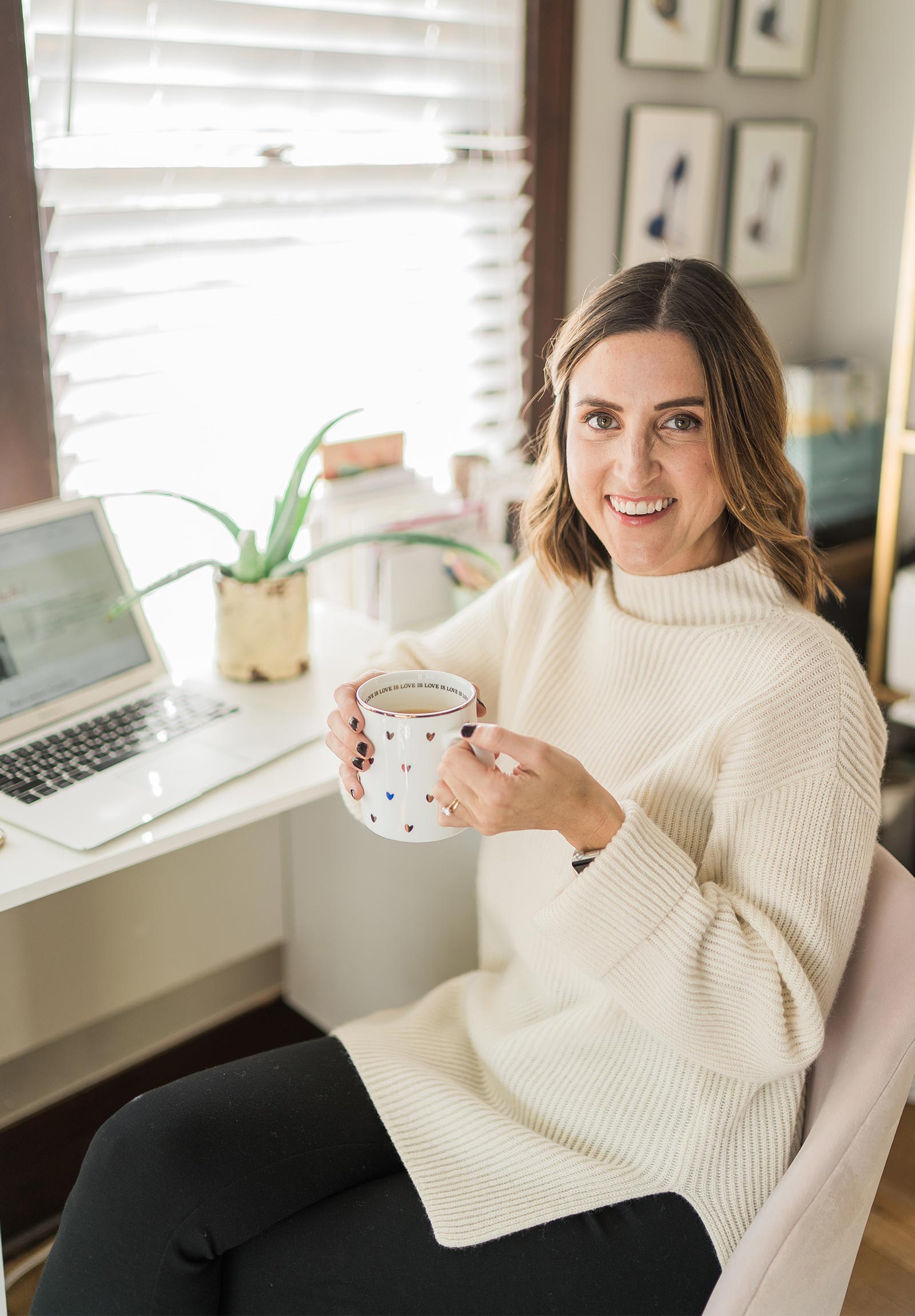 Can you give us a peek of a day in the life? I love that you’re a fellow early bird!

I love the early morning time! I recently published a blog post sharing my typical daily schedule, you can check it out here!

A brief version, I wake up around 5:30AM and work quietly on my couch until around 7:30AM. During quarantine, I’ve been squeezing in a morning workout. In pre-Covid days, I prefered an afternoon workout or SoulCycle ride. I aim to be at my desk by 9:30AM. I spend the morning knocking out all of my smaller tasks for the day. I break for lunch around 12PM. Most days, I try to squeeze in a walk around my neighborhood after lunch to get some fresh air and steps! It’s hard to get those 10,000 steps a day in Houston as compared to DC! I’m back at my desk around 1:30 and usually focus on my bigger to-dos for the day during this time block. I try to wrap everything up and close my computer by 4:30. Pre-Covid, I usually hit up a SoulCycle class and then pick Michael up from work. We share a car. Right now, we usually take a longer neighborhood walk around 5PM. We cook dinner at home during the week. It’s one of my favorite parts of the day. No screens, music on, cooking. After dinner I usually take time to publish an Instagram photo on my Cobalt Chronicles page and interact on Insta for a bit. Michael and I usually wind down by watching an episode of whatever show we happen to be watching at the time. We’re currently deep into Westworld. I’m in bed by 9:30 and usually read until about 10PM when it’s lights out.

What advice would you give brides, creatives, and small business owners who have found themselves needing to dig into the fine print on contracts during COVID?

The event industry has been hit hard by Covid-19. I recommend paying close attention to the language and details in the Force Majeure or Act of God clause within contracts. Keep in mind that those clauses generally only come into play if the obligations of the contract are entirely impossible because of the force majeure event. It’s also important to make sure the rescheduling and cancellation policies are outlined in a very clear manner in your contracts. Moving forward, as small business owners, I think it’s important to anticipate similar-type circumstances happening again and to adjust contract language to address potential similar situations that may occur in the future. While we’re still navigating the current Covid-19 situation, it’s important to remember that we’re all in a difficult position right now, whether you’re a bride having to reschedule a wedding or the wedding photographer on the other side who’s out of work for the foreseeable future. Being kind, understanding, and flexible goes a long way right now. 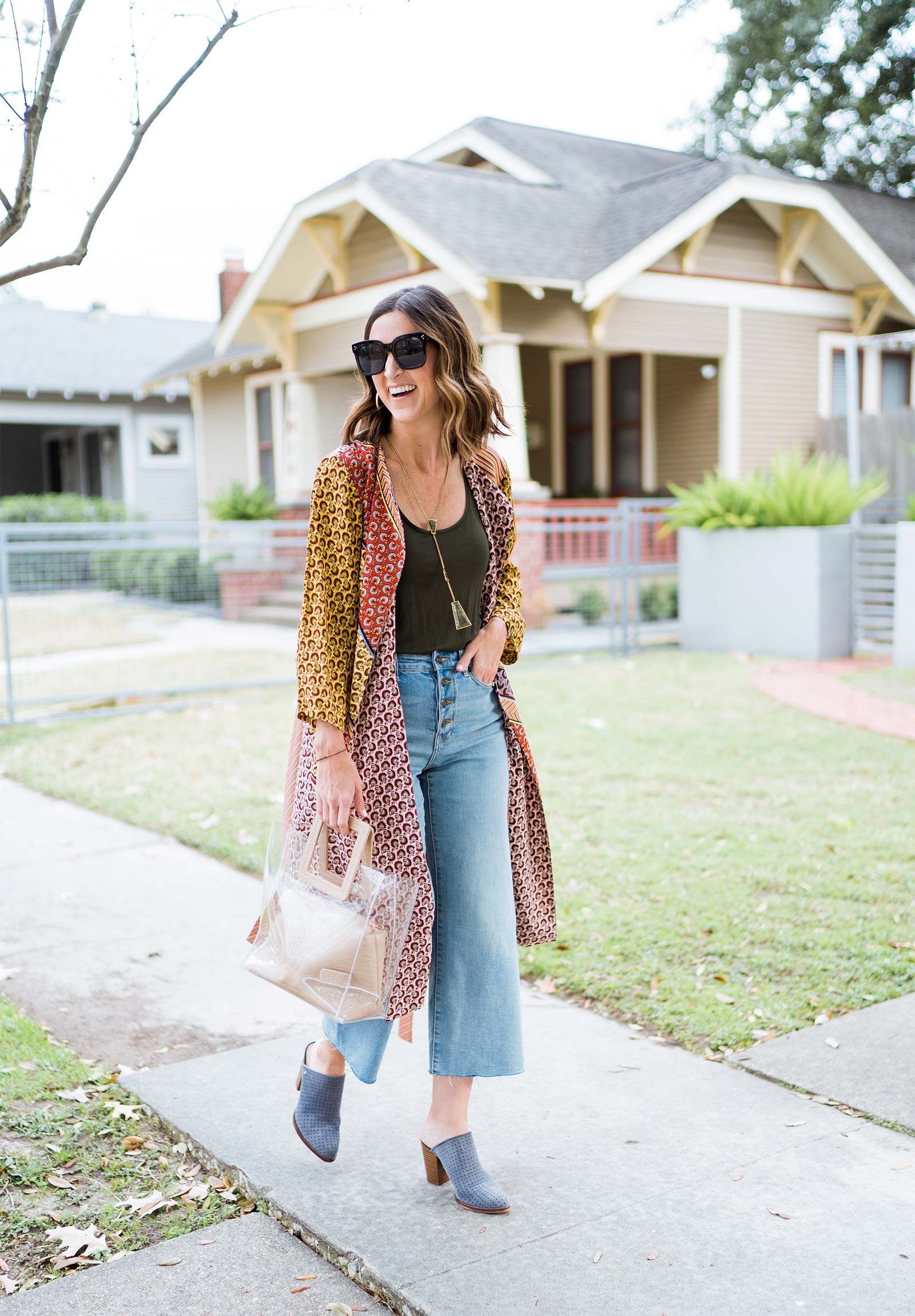 And I have to ask…you guys are whipping up some seriously good meals and drinks at home during quarantine! Can you share some of your favorites?

Well thanks! We’ve been trying to be creative. One positive that’s come from this extended time at home is that I’ve made a point to bake things that I normally wouldn’t take the time to do. My favorites so far have been homemade rustic bread, lemon blueberry scones, homemade focaccia, and air fryer chicken taquitos (both saved in my Recipes 2 highlight on Instagram). On the cocktail front, we have perfected the simple spicy margarita! It’s so easy, contains minimal ingredients, and is delicious!

Organizational tool you can’t live without? Dropbox
Last place you traveled? Pre-pandemic, New Orleans
If you could majorly splurge on a vacation, where would you go? Maldives!
Favorite restaurant in Houston? – Date night: Hugo’s Casual: Pinkerton’s BBQ
Go-to weekday lunch? I am a child when it comes to lunch, and a creature of habit. All the snacks. Honeycrisp apple with almond butter, fried egg on toast with feta and hot sauce, and sliced strawberries.
Go-to cocktail? – Moscow Mule or Spicy Margarita
One piece of advice? – If you’re thinking about doing something, starting something, or going off the beaten path, just do it. Go for it. You can always turn back, drop it, or go home.
A Quick Chat With...
May 13, 2020
4 comments
Share