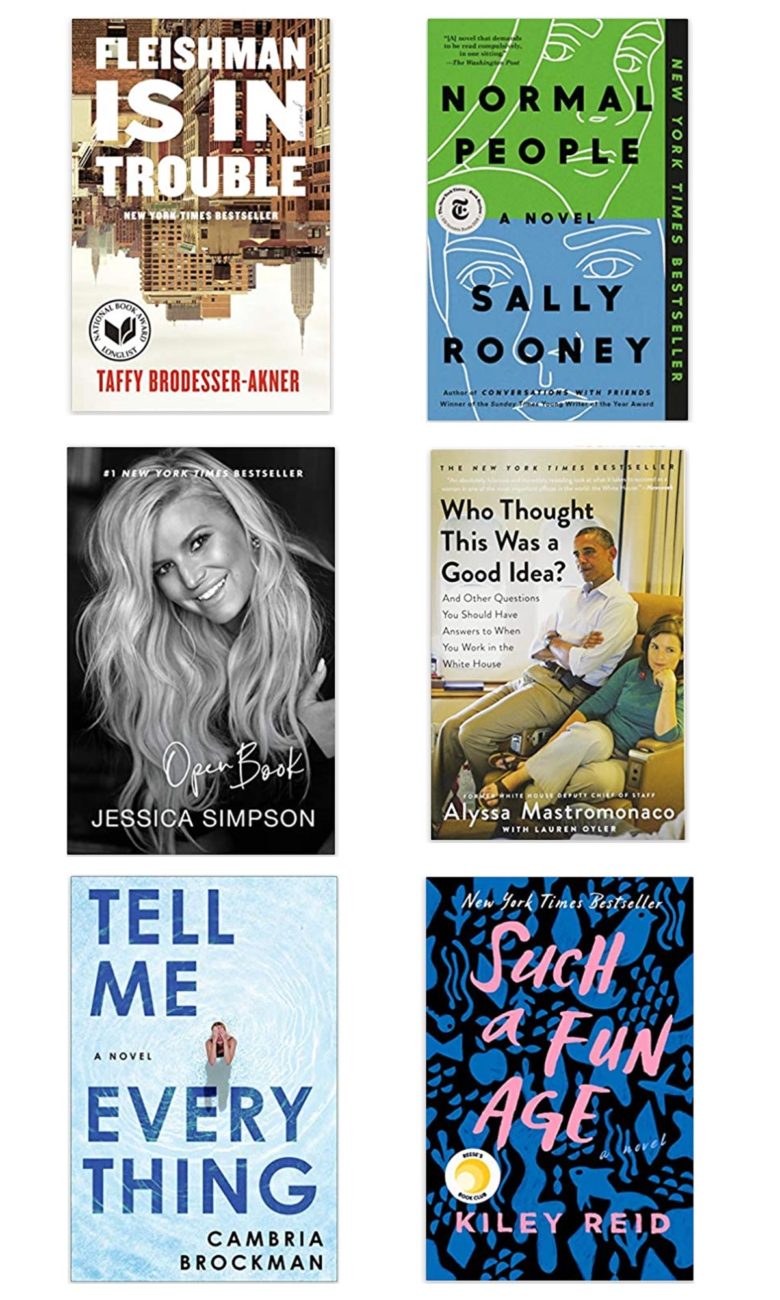 And yet again, I’m overdue on sharing some recent reads! I finished the last one in this roundup, Such a Fun Age, towards the start of social distancing and it rounded out a pretty good bunch. I liked everything (nothing was a dud!) and really loved a couple.

Also, Victoria introduced me to Bookshop, a relatively new site that lets you order books and e-books online while also supporting independent bookstores. It’s a great alternative to Amazon, so consider shopping for books this way if you’re open to it! Full disclosure that I did sign up for their affiliate program, so will earn a small percentage if you make a purchase.

After 15 years of marriage, Toby Fleishman and his wife, Rachel, part ways and to say Toby embraces his new bachelor lifestyle would be putting it lightly. Then one day, Rachel drops the kids off and goes off the grid…and doesn’t get back in touch. In addition to working at a large NYC hospital, Toby is now tasked with holding things together at home and trying to track down his wife, while maintaining his own sanity and seeking to understand Rachel’s complex personality that drove her to disappear.

I was pretty tepid on this book to start (mostly due to the crass take on Toby’s single lifestyle), but a friend encouraged me to stick with it and I’m so glad I did–it really picked up about halfway through for me! I’d have given it 4 stars but knocked off a half due to the slower start.

Connell and Marianne grew up in the same town, with Connell being a popular kid and Marianne being a loner. The two strike up an unlikely relationship and find themselves caught up with each other despite their countless differences. When they both go off to the same college the following year, the roles flip–Marianne’s grown into her own while Connell is more of an outcast. Their friendship + romantic relationship becomes increasingly complicated during the years when they’re also each trying to find themselves.

I feel like this book was everywhere when it came out, and I think I set expectations a little too high. Parts of it felt redundant to me and there were a lot of cringeworthy moments that just didn’t do it for me. The book actually got made into a show and is currently airing on Hulu, and pretty much everything I’ve seen says the show is much better than the book. I’m planning to watch it at some point in the coming weeks!

Whether or not you’re a fan of Jessica Simpson (I personally loved Newlyweds), PLEASE give this a shot! She’s truly an open book about most of her life–her childhood all the way to her marriage today. There’s all the tea about her romantic relationships (flings and marriages), what it was like growing up as a pastor’s daughter, the struggles of trying to break into the music scene, and everything in between. It’s heartbreaking and happy at the same time and there’s no way to come out of this not rooting for Jessica–not to mention, it’s so well-written and a page-turner!

Many people raved about the audiobook and I kind of wish I’d listened to it instead of read it, but either way, this gives all the feels and makes you feel for Jessica no matter how you perceived her before. (Also, I now have strong opinions about John Mayer and they’re not good.)

Alyssa Mastromonaco is Obama’s former deputy chief of staff and Who Thought This Was a Good Idea contains stories from her time in the White House and advice she’s picked up along the way. We’re talking everything from meeting the Queen and coordinating seemingly impossible logistics at the last minute, to personal and professional advice she picked up from some of the biggest names in politics along the way. This is a great one regardless of where you sit politically…it’s witty, fast-paced, and a great peek into a life that we don’t get to hear about too often. It feels like you’re hanging out with your bff Alyssa and she’s spilling her story!

So…I definitely read this book twice. I’m kind of embarrassed to admit that I only half realized it because the first time was when it was released around three years ago. I’ve read a handful of interviews with Alyssa and listened to some podcasts she’s been on, so I just assumed a lot of the anecdotes were things she’d talked about on other verticals. Anyhoo, despite my accidental blunder, I can say it’s worth a read–perhaps twice, with a few years in between :)

When Malin arrives as a freshman at Hawthorne College, she makes fast friends with an eclectic group–a theater major from London; a handsome, rich New Englander and his cousin, a shy pre-med student; a prince from Abu Dhabi, and a charismatic art history major. Malin’s is unlike any of them…she has her own troubled past and is an expert in hiding it but also at building close relationships with her circle to learn their vulnerabilities and secrets. She seems to have everything under control until graduation, when her past is revealed and things quickly spiral. There’s a murder, friend drama, and Malin’s entire four years flashing in front of her eyes as the group grapples with a whole new set of challenges during what’s supposed to be one of the best weeks of their lives.

I’m not usually into thrillers but this one is pretty mild…it was fast-paced enough to keep me curious about what was happening next, but not spooky enough to freak me out. I almost gave it four stars but realized I don’t always love protagonists with dark personalities…that’s a personal preference! It’s twisty and well-written and a good break from fluffier fiction if you’re in the mood for something darker.

Alix is a mother and successful businesswoman-meets-coach who appears to be doing it all. Emira, Alix’s babysitter, is in her mid-20s and trying to figure out what she wants to do with her life. When Emira, who’s black, is stopped by a store security guard while out with Alix’s white daughter one evening, Alix panics and takes it upon herself to “fix” things for Emira. Emira isn’t looking to be Alix’s project and their relationship sees some painfully awkward moments that are only helped by Emira’s love for her daughter Briar. Things take a turn for the complicated where the two women discover they have something significant in common–and not in a good way.

I really don’t think my summary does it justice…I devoured this book in two days! It’s been getting a lot of positive press (from what I’ve seen) and I can see why. It addresses race and privilege in a way I haven’t seen a book do before, and is a page-turner that’s written with a certain levity despite the serious themes at hand. If you read anything from this list, make it this (followed by Open Book!).