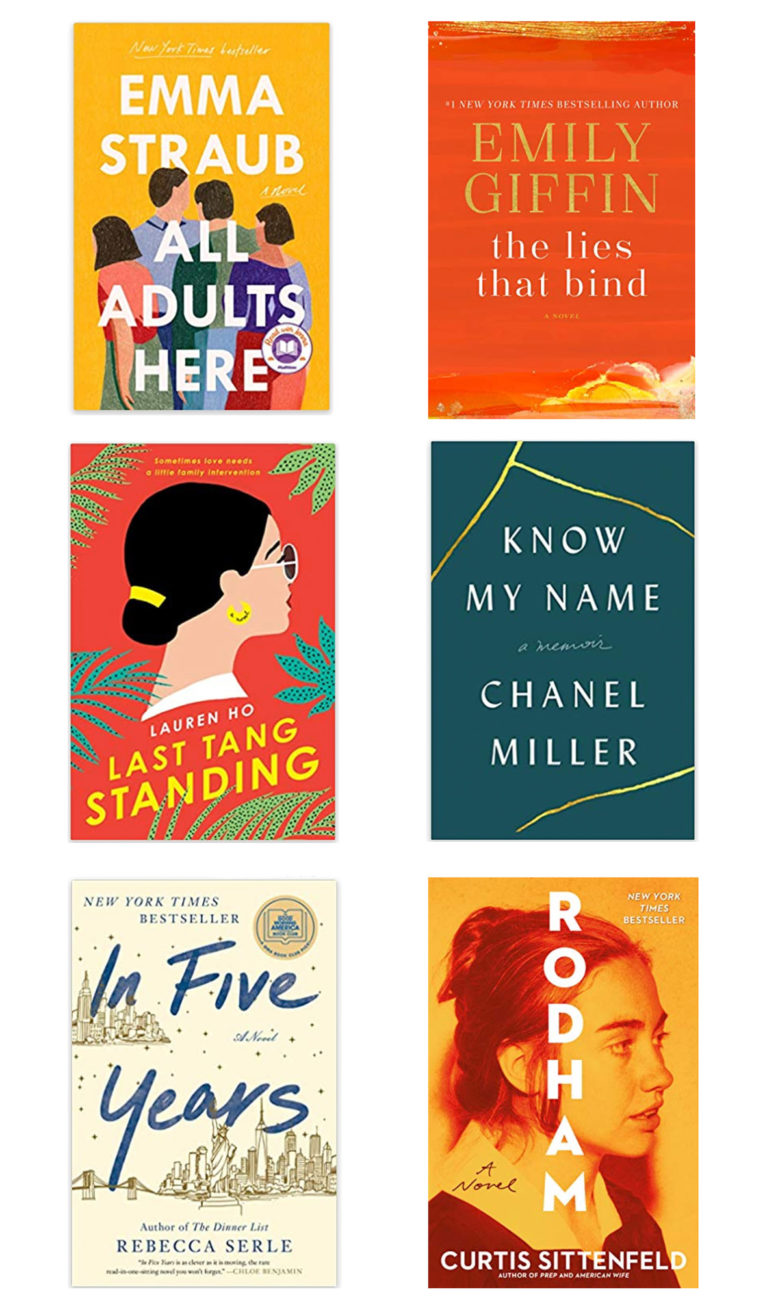 This list is a few weeks overdue (I’m well into my six next books) but if you’re reading as much as I am, this should serve you well! I got off the waitlist for several popular reads so a lot of these may sound familiar, as they were well-promoted upon their release.

All Adults Here follows Astrid as she ponders her own life, the lives of her three children, and her 13 year old granddaughter who moves in with her after being plagued with drama back home. A recent incident in town prompts Astrid to reflect on her role as a mother and how her parenting shaped them into who they are today. Everyone in the family is facing their own set of struggles and they don’t always handle familial affairs in the most mature way, making this a story about family drama, quirks, parenting, and accepting your loved ones for who they are.

This book garnered so much attention and I had high hopes, but it took me so long to get into it! I just didn’t feel much of a connection to the characters–I think because the beginning dragged on and it took too long to “set the stage.” This was one of Jenna’s Book Club picks and a lot of praise I’ve seen touts it as a great summer read. It just wasn’t for me.

When the very newly single Cecily finds herself at a dive bar, the last thing she expects is to form a genuine connection with her barstool neighbor. Still reeling from her breakup with Matthew–who she thought was “the one”–Cecily finds herself falling hard for Grant. Their relationship moves quickly and suddenly Grant has to head to London for several months. Cecily follows her heart and is prepared to be all in–and then 9/11 happens, and Grant goes missing. In her frantic search to find him, Cecily sees his face on a missing person poster and realizes she’s not the only one looking for him. She soon uncovers a side of Grant’s past he’d never told her, and at the same time wills herself to move forward towards a life without him.

I’ve loved every Emily Giffin book I’ve read so it’s no surprise this one was a win for me! It was a love story but felt unique (so many romantic plot lines tend to remind me of other books) and I liked the element of mystery and that it was a page-turner without being suspenseful or a thriller (which aren’t my genres of choice).

This book was described to me as Crazy Rich Asians meets Bridget Jones and I can confirm that that’s the perfect way to describe it! Andrea Tang is a 33 year-old lawyer whose family incessantly questions her lack of life partner. Having dated her fair share of questionable men, Andrea is more focused on making partner and thriving on her own. One day, she meets the famous Eric Deng and the two strike up a relationship–making him the perfect partner her family always dreamed of for Andrea. Meanwhile, her life gets decidedly more complicated due to a contentious relationship with her office rival, Suresh.

If you’re looking for a really light, funny read, I’d highly recommend this! It’s a great weekend couch read–particularly at a time like this when I’ve been increasingly looking to sprinkle frivolity into my fiction. It’s a great mix of drama, romance, family traditions, and humor.

Know My Name is a memoir by Chanel Miller following her experience after being sexually assaulted on Stanford’s campus in 2015. Known to the world as Emily Doe until this book was published last fall, Chanel shares a brutally honest account of what happened to her, sheds light on a complicated legal system that works against victims and how college campuses need to do more, and outlines the struggles that come with trying to regain her life again. She also openly shares the ways in which the incident impacted every facet of her being and what it was like to be anonymous for so long despite being part of one of the most talked about cases in the world.

This is one of the most devastating books I’ve ever read but should 100% be required reading. It’s incredibly well-written and will break your heart, make you mad, and make you root for Chanel like she’s your best friend. Her words are so powerful to women and girls anywhere, she’s undoubtably has given victims a voice they may have desperately needed. I’ll leave this excerpt from the end here: …to girls everywhere, I am with you. On nights when you feel alone, I am with you. When people doubt you or dismiss you, I am with you. I fought every day for you. So never stop fighting, I believe you.

Dannie is a Type-A, big time lawyer living in NYC with her fiancé and has everything she’d ever dreamed of. One evening, she dozes off only to wake up in a completely different place: a new apartment…with a new man. Totally confused, she catches sight of the TV and that it’s exactly five years to the date into the future. Dannie wakes up shaken and confused but goes on with her everyday life, which is packed with her high-powered legal career, social obligations, and trying to plan a wedding. Four and a half years later, the man from her dream shows up back in the most unexpected way.

I’d heard so many people rave about this book and was so excited to finally get my hands on it! I really loved it–it’s one of the most unique plot lines for a love story–I’m reluctant to say more about the plot and ruin some of the twist! The ending wasn’t my favorite (it felt abrupt and rushed compared to the rest of the book), but I tore through this one quickly.

First off, I’ll clarify that this is a non-partisan book–you can love it regardless of where you sit politically. Rodham chronicles Hillary Clinton’s life with a twist: one in which she meets and dates, but doesn’t marry Bill. After their breakup, she goes on to be a political powerhouse…without ever having him by her side as a lifelong partner. While a lot of the facts of Hillary’s life in Rodham are true, it’s definitely still considered fiction and is much juicer than any non-fiction we’d ever see from a political figure (read: intimate moments aren’t off limits here).

I figured this would be a win because I loved Curtis Sittenfeld’s American Wife, which is loosely based on Laura Bush’s life. It’s certainly an interesting book to read in mid-2020 based on the current state of political affairs, but the only part that stood out as strange to me was trying to guess how much was must have actually happened this way (since so much, particularly about Bill’s behavior in their relationship, feels believable based on what we know about him now) and how much is purely made up. It paints Hillary as relatable and strong, but also flawed in a human way; it’s as if a politician gave you a glimpse of his or her personal life in a way that realistically, they never would.

The links for each book above go to bookshop.org, which supports independent booksellers. If you’re open to shopping there, please do! (You can get e-books, too.) If you prefer Amazon, they’re linked below.