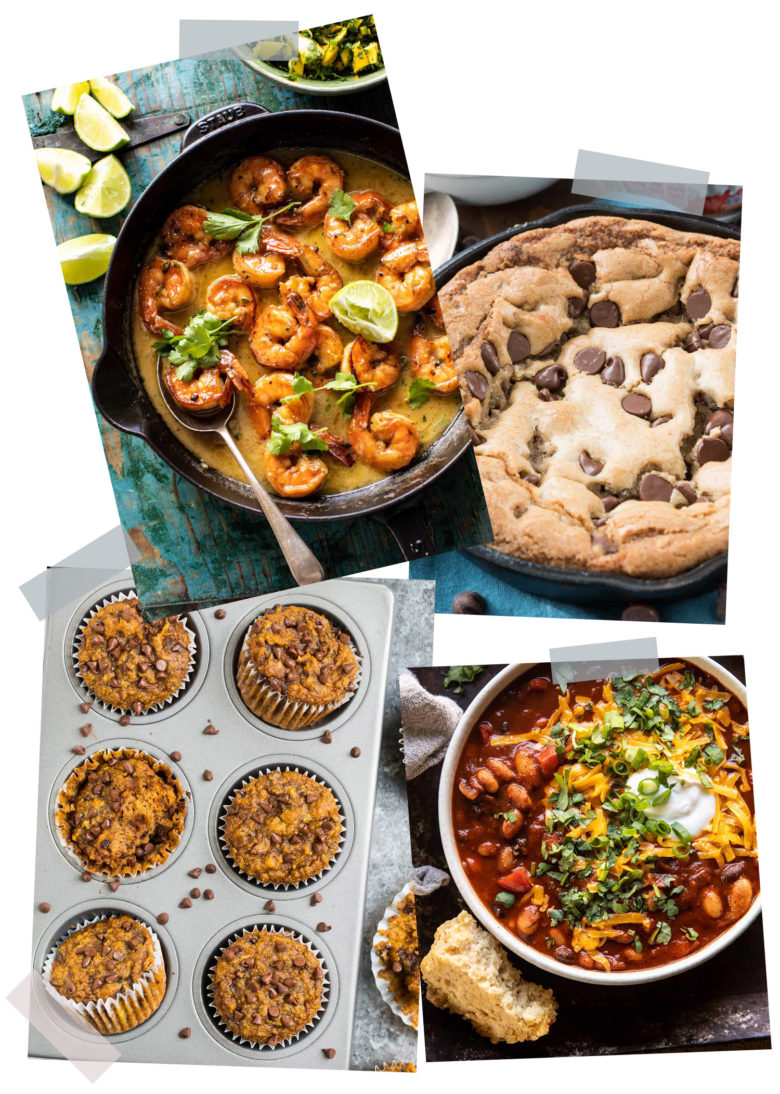 An upside of being home for essentially eight months straight has been having the opportunity to continuously try new recipes and add several go-tos to our arsenal. Here are four recent favorites!

We’re big Half Baked Harvest fans (I really don’t think we’ve been disappointed by a single recipe, and we’ve made a lot) and this is one of my favorites! The first time we made it was actually my introduction to cooking raw shrimp on the stove–we use this cast iron–and it’s now turned into a go-to protein for us during the week because of the short cook time and easy incorporation into tacos or quesadillas. The honey garlic butter shrimp is super flavorful and easy to make; we usually buy pre-made mango pineapple salsa from Whole Foods, but a similar jarred version would probably be good, too. Just note that the recipe takes longer than 20 minutes from start to finish by the time you prep everything!

Mini skillet desserts have been my “thing” during quarantine, and we regularly go between making this cookie recipe and this brownie recipe. We were making the brownie more until we ran out of cocoa powder, and now I’m really into the cookie! I cut down the sugar slightly and reduce the number of chocolate chips in both recipes, and they’re still incredible. Best served with ice cream or some kind of whipped topping–I’m partial to the canned coconut whip from Trader Joe’s!

We made this on Sunday and it’s definitely one of the best vegetarian chilis I’ve had! Like most HBH recipes, it’s really flavorful (to the point where I’m glad I cut back on some of the spices…there’s a kick!) and it’s an inexpensive, easy to make, homey meal. We’ve been eating it all week with cornbread (TJ’s makes a great boxed mix), shredded cheese, sliced avocado, TJ’s eloté chips, and a dollop of Greek yogurt.

I recently completed The Wellness Project in an effort to see how certain foods impact my body (it’s not as rigid as the Whole30 and felt much more doable for me!), and made these pumpkin muffins a couple weeks in. These or these (the latter being a cringeworthy throwback I should probably re-photograph) are the pumpkin muffin/breads I’ll usually make but the almond flour version was surprisingly a big hit for both of us and I didn’t miss the white sugar at all.  Just remember to keep them in the fridge because almond flour can go bad quickly. Bonus: the cloves made the apartment smell amazing!

P.S. 100% making the peanut soup featured in this post in the coming weeks!