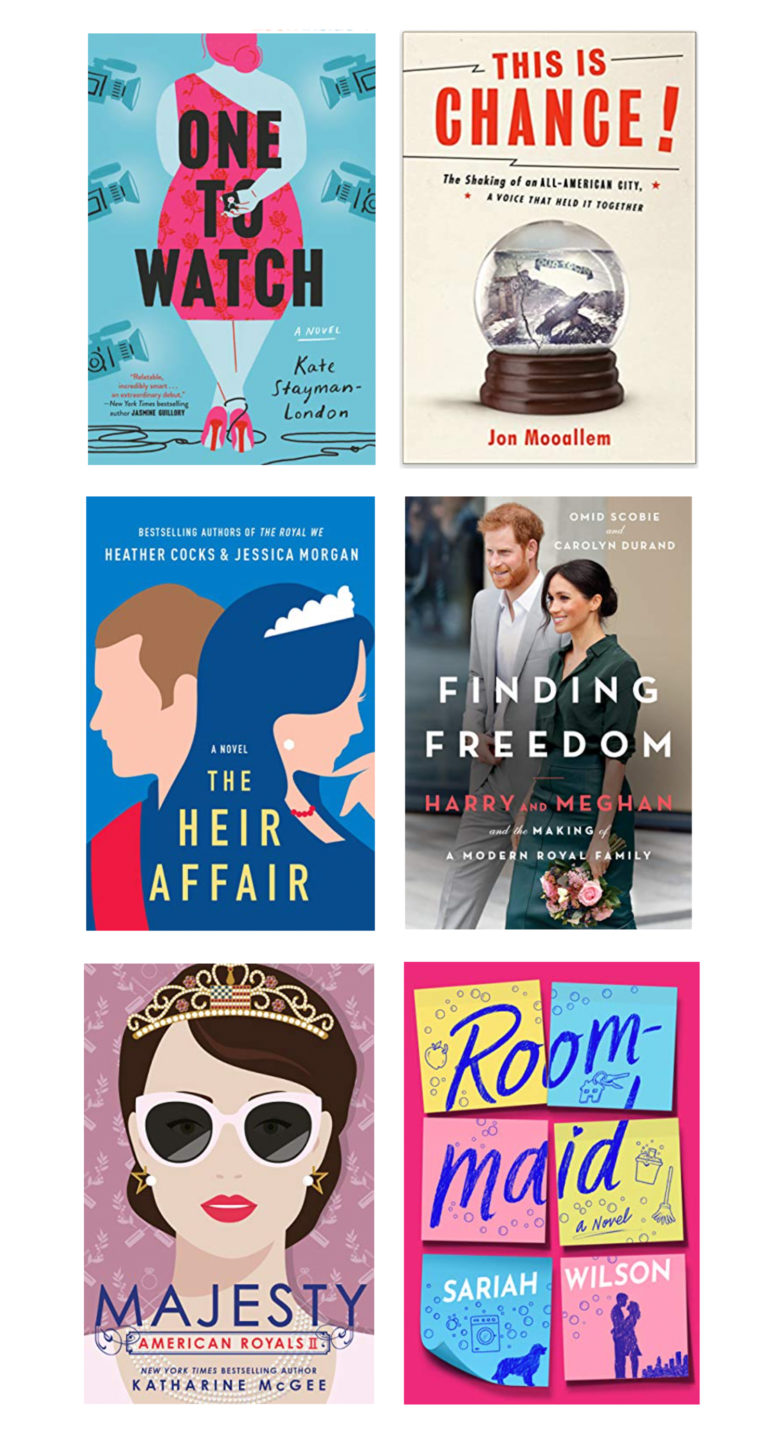 Six recent reads for you, if you’re spending [even more] time on the couch these days!

Bea Schumacher is a successful plus-sized, Insta-famous blogger whose life as far as her followers are concerns seems to be pretty great, which it is–except from the broken heart she’s been quietly nursing behind the scenes. Soon after she swears off dating to focus on herself, Main Squeeze, the country’s favorite dating show, calls on Bea to be the start of their next season. She accepts with the intention to let the show boost her career but is committed to not actually falling in love. Once filming gets under way, things take a turn for the messy, confusing, and enchanting…Bea finds it hard not to get swept up in things, but also difficult not to be able to tune out the haters and men with questionable motives.

If you’re a fan of The Bachelor franchise and love a good rom com, you’ll probably love One To Watch! It’s a refreshing take on a mainstream plot and I really appreciated the realness of Bea’s character; it’s hard not to like her and sympathize with her as she’s under the judgmental eye of viewers, critics, and of course–some men who aren’t there for the right reasons.

When Genie Chance, a working mother and part-time radio reporter in Anchorage in 1964, experiences the most powerful earthquake in American history to date, she steps into a role of the voice that her community and Alaskans need in the disaster’s aftermath. Her commitment to keeping everyone informed about their town through a tireless three day long broadcast helped give hope to people who needed it most and reveals how the community rallied together during an impossible time.

While this isn’t the type of book I typically gravitate to, I ended up really appreciating the perspective and detail that went into recounting one of the country’s biggest natural disasters. It’s entirely based on a true story and the author, Jon Mooallem, utilized thousands of unpublished documents, held several interviews with survivors, and accessed the network’s original broadcast recordings to paint the picture of what happened in Anchorage that fateful day. It’s a sad story but I didn’t find it painful to read, but rather appreciated learning about such a moment in history that I knew literally nothing about in such an engaging way.

I was eagerly anticipating Omid Scobie and Carolyn Durand’s look at Meghan and Harry’s life together, which promised a peek inside their relationship and its growth as under the scrutiny of the world’s eye. While Harry and Meghan have certainly been more informal and open than many others in their family, there’s still an intense sense of mystery and secrecy surrounding any members of the royal family. I’m a pretty big royals fan and have always liked Meghan, so was interested to learn more about the couple’s whirlwind relationship.

The first thing I’ll say is this book heavily favors Meghan and Harry, and I’m not sure I buy it that they had nothing to do with it. They may not be actual sources but it’s pretty clear that many of the sources are from within their close circle and given that they’re able to speak about specific–sometimes intimate–moments that no one beyond their inner group would likely know. The very evident bias towards H&M kept me from rating this higher, but I’d recommend the book if you’re a fan of the modern royals and are curious to learn more about their lives behind the scenes!

The new Duke and Duchess of Clarence make a run for it following their drama-inducing wedding and are enjoying their life of anonymity, when suddenly they’re called back to London and welcomed home with family secrets and affairs that demand to be dealt with. To make matters worse, Bex and Nick aren’t exactly warmly welcomed home; the public is angry, the Queen is angry, the press is looking for any ounce of “news” they can find, and their relationship with Nick’s brother, Freddie, is still rocky following their love triangle from before the wedding. The duo is doing everything they can to stay above water in both their public and private lives and trying to navigate their own life as newlyweds, too.

The Heir Affair is the sequel to The Royal We and I’m disappointed to say that I did not love it! The Royal We was just so good but this one just took me awhile to get into, to the point where I almost called it quits 25% or so in. The plot just moved so slowly and the book really is a continuation of the first book in the sense that there’s barely a reminder about the characters and their lives before the plot takes off. A few people mentioned that it was helpful to reread The Royal We first but I didn’t want to take the time to do so; I’d probably recommend that if you can swing it, or else temper expectations for this sequel.

The sequel to American Royals was well worth the wait! Beatrice is now queen and her partying sister, Samantha, is still in love with Beatrice’s fiancé, Teddy–that is, until someone unexpected catches her eye. Samantha’s best friend, Nina, also finds herself in an unexpected relationship that comes with its own dose of drama. And who can forget Daphne, who’s always brings drama onto herself and others–this time to an unprecedented level. As America gets used to having its first queen, the Washington family has their own work needing to be done behind the scenes…

I loved the first book so was really excited for this–and it didn’t disappoint! I tore through it quickly and actually read it directly after The Heir Affair. It’s funny to picture America with a royal family but it just works, and comes with a good dose of escapism, romance, drama, and love. As an aside, I’ve become a big fan of the author, Katharine McGee, after her Bad on Paper podcast episodes–first last year, and then again this fall.

Madison Huntington grew up in a wealthy family where everything was provided and decided for her, until she makes the decision to go against her family’s “plan” and become a teacher–meaning her entire financial support system gets ripped out from under her. Learning to live on a very modest salary presents some challenges, and Madison ends up taking a job as a “roommaid” where she lives in the spare bedroom of financier Tyler Roth’s pristine penthouse. A couple minor problems: Madison doesn’t even know how to wash dishes, and Tyler is very easy on the eyes. Determined to make this arrangement work, Madison focuses on learning how to actually look after the apartment, keeping any thoughts about Tyler’s eligibility out of mind, and making sure she’s holding her own professional life together in the process.

This was a cute, quick read with a witty, creative plot line–a good rom com. I read it in a weekend and am definitely going to seek out other titles from Sariah Wilson!

* Thank you to Random House for sending me this book!